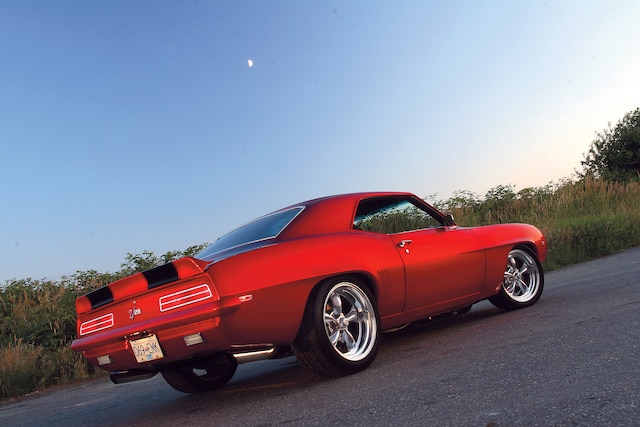 You know a car is rusty when a panel beater says you’d be better off to dump it at the junkyard. “That’s what he told me,” Ryan Barichello said, snickering, as he leafed through a stack of snapshots. In them were remnants of a ’69 RS. The fenders were smashed. You couldn’t even lock a dog in the trunk on account of the rusty quarters. “I saw the car at night in the rain,” he admitted. Even then, “It looked rough.”

Bear in mind that Ryan actually had a bit of experience with cars. His dad gave him a new ’94 Trans Am for his 16th birthday specifically to distract him from a longstanding dream: Ryan wanted a ’69. In the absence of his dream car, he made do with the Fourth-gen, modifying it until it wore a blower and cut a 12-second ET.


In the end, though, it was that Trans Am that drove Ryan to a rainy driveway to make a really bad decision. Imagine dear ol’ dad’s face when Ryan, like a cat presenting its keeper with a gutted mouse, dropped a carcass of a dead Camaro on the doorstep.


At least Ryan had the foresight to labor over a letter car–not a Z, mind you, but at least it was a V-8 RS. For warning Ryan about this car and for so deftly pulling off the tough panel replacements, the lion’s share of metal work credit goes to Collin Gock. Vancouver’s Spotlite Collision finished the body, whereupon Spotlite’s Mike Lakovic, one of Ryan’s good friends, sprayed it and the rear bumper with Glasurit in a tri-coat candy red over a silver base. He also finished it with the Z stripes and painted the rear bumper to match the plastic front. Ryan reassembled the body with Marquez Design RS-style billet taillights, front turn signals, and side marker lights.

About the only body modification the car required to meet Ryan’s objective was to roll the rear fender wells, and that’s on account of the 18x8 and 10x8 American Racing wheels and 245- and 275-mm-wide, 40-series BFGoodrich G-Force KD hides. But this car owes its performance to more than big wheels. And that’s partly due to Craig Arneson.

Behind the rear wheels are Baer brakes with drilled-and-slotted 11-inch-diameter rotors. Between those is a 12-bolt axle with 3.73:1 gears and an Auburn limited-slip differential. Ryan and Craig hung that axle on de-arched Suspension Techniques multi-leaf springs. Just as with the front, the rear axle sports a Suspension Techniques anti-roll bar and QA1 adjustable dampers. They tied together the ends of the car with Global West subframe connectors.

In researching his ideal car, Ryan fell under the spell of Tyler Beauregard, founder of American Touring Specialties. To be specific, he fell for his car. “He’d swapped an LT1/T56 into his green ’67 Camaro,” Ryan said. With a blown 12-second Fourth-gen of his own, something clicked. “That is so slick,” he enthused, “…late model power in the look of a classic First-gen!”

Though he actually collected parts to build a LT1 stroker, he finally sourced an LS1 from a 2002-vintage Z28. The bottom end is stock, but the ET Performance 215-series cylinder heads bolted to it yield nearly an 11.5:1 compression ratio. The engine also features a Texas Speed & Performance 233/239 cam with 112-degree lobe angles and Harland Sharp rockers. Among other things, Ryan’s friend Mo Esmail helped marry the Speartech engine management system with the Painless Performance wiring.

Since the car was strapped to a dyno, Ryan added the Tony Mamo-ported FAST intake manifold and the 90mm throttle body. In the old configuration and as tuned by his friend Chris Puchniak, though, the engine made 425 lb-ft of torque at 5000 RPM and 452 horsepower at 6600 RPM. Yes, that was at the wheels.

Without the albums that plot its evolution, you’d never believe that the clapped-out Camaro in the photos was the same car. While he’s quick to admit that he never could have pulled it off without help from so many friends, ideas from builders like Mark Stielow, and inspiration from the online communities at Lateral-G.net and Pro-Touring.com, Ryan smartly directs the majority of the gratitude to his wife, Milva, for patiently bearing with this saga.


Despite the presence of an all-wrong TH400, the car was originally a three-pedal model. “The clutch pedal was zap-strapped to the floor boards,” Ryan said, incredulously. It has a T56 and a SPEC Stage III clutch. Muffler Tech in Coquitlam BC stitched together a 2 1/2-inch-diameter system from stainless mandrel bends, an X-pipe, Magnaflow mufflers, and 3-inch-diameter tips. Its bark is just about as bad as its bite.


Nowadays Ryan keeps tabs on the engine with Auto Meter gauges set in a Detroit Speed & Engineering dash. He drops into leather-clad APC seats and pilots the car with a Sparco 14-inch-diameter Lap 5 steering wheel and a Hurst Billet Plus shifter. Mo Esmail, who helped wire the car, also set up the JVC head unit, MTX amplifiers, and JL drivers when he pitched a hand during the car’s finally assembly and interior install.


Given the seven years of trials and tribulations he put himself through to build his childhood dream car, it would’ve been foolish not to ask Ryan whether he’d do it all over again. “Are you crazy?” he snapped.


I knew he would.