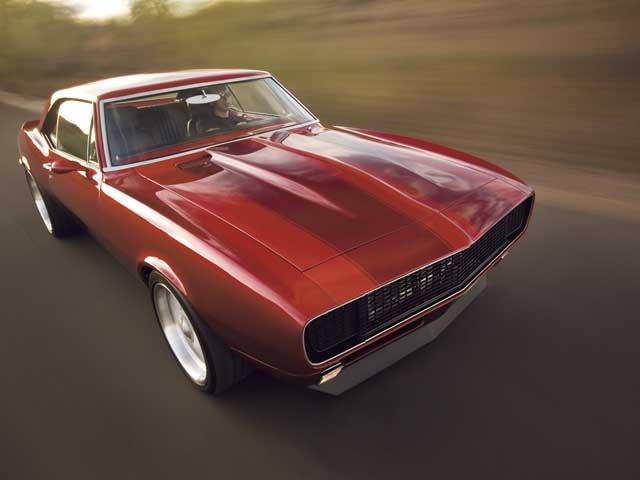 In the classic TV show The A Team, Col. John "Hannibal" Smith would often utter the phrase, "I love it when a plan comes together." He was right. Nothing beats the feeling when things just click. Jack Hodson's story is a bit like that, except what came together in the end bore little resemblance to the original plan.

In fact, the initial plan wasn't even to build a first-gen Camaro. As Jack told us, "After seeing the debut of the Hotchkis F71 Camaro, I was really interested in fixing up a second-gen." His lack of experience building cars meant that he wanted something fairly complete to start with. You know the story; it's the same one we've all used to sucker our significant other. We say, "I'm just going to clean it up a bit, maybe swap out the old wheels for something nicer." Yeah right, like that's gonna happen.

Jack swears that was his plan, but when he couldn't find a decent second-gen, his plan took on the first of many changes. "I had just about given up when a friend from work told me about a '67 he knew was available. When I checked out the car, I was so excited that I missed some of the things I should have been looking for," remarked Jack. Those overlooked details included signs of rust and other body "issues." The ride had a lot of good points, though, like a TPI fuel-injected engine, a 700-R4 trans, and even a 12-bolt posi rearend. The paint was nice. The RS front end made Jack drool, and soon a deal for $6,000 was struck with the seller.

Unfortunately, the owner had misplaced the title, and after six months of waiting around Jack began to think the deal wasn't going to happen. "Finally, the guy called and said he had found the title while digging through some paperwork. That night my wife, Joy, and I pulled the money from the bank and headed to his house," Jack said. The pair actually went to the wrong house first, where there was a junked '69 Camaro up on jackstands, to which his wife commented, "You've got to be kidding. You're paying $6,000 for that?" After Jack calmed his wife, they found the right house, and upon seeing the '67, his wife nodded with approval.

Jack drove the car home that night anxious to start tinkering with it. According to Jack, "Within a few days I washed the car, not realizing water was pouring through the front and rear windows and into the trunk." This meant that his plan of a simple refresh was blown, and soon he found himself really tearing into the Camaro. Before long Jack was yanking the motor and front clip while simultaneously explaining to his ever patient wife that this was just a small departure from the original plan. Jack and his buddy, Dennis Lawhorn, tagged and bagged the Camaro down to nothing. Soon the duo realized this was going to be a ground-up rebuild. "I really had no idea what I was doing, but thankfully, I had friends who did," relayed Jack. "I really need to thank Dean Livermore and the guys at Hotrods by Dean for letting me hang out in their shop and ask a ton of questions. My first welding project was building a body cart using scrap tubing and Dean's welder."

While Jack was learning how to weld, the '67's body was off being media blasted down to bare metal. Four previous paint jobs were torn off the Camaro, including the original color, mountain green.

Over the next year Jack had many opportunities to perfect his welding skills. New floorpans, upper dash, and DSE subframe connectors were stitched in place, and the trans tunnel was raised to clear the new TKO-600 Tremec five-speed trans. Now more confident with the welder, Jack then turned to the bodywork and replaced the rear valance, patched the quarter-panels, filled all the emblem holes, and smoothed the firewall. With all the damage fixed, he then sent the ride to Crisp Custom Paint, where they blocked the car to perfection and layered it in House of Kolor Tangerine Kandy with custom "root beer" rally stripes. Tasty.

With the Camaro back from paint, Jack was hoping to have the car finished within six months. That didn't happen. So Jack spent extra time on details. Tasks that he thought would take a few hours took days because he wanted them just right. He was also slowed down by the fact that he has a day job as a neon-glass blower. This left only weekends to work on the F-body.

As the bodywork was being completed, the engine was being built by Timm Jurincie of Tuf-Enuf Performance. They punched the 350 small-block out to 383 cubes and filled it with a top-shelf forged rotating assembly. Ross 8.5:1 pistons are slung by an Eagle crank and rods. AFR 210cc aluminum heads sit atop the short-block and are fed air by a Chevy TPI intake manifold. Since Jack's goal was to update the vintage Camaro, a F.A.S.T. XFI fuel-injection system was added to the mix. For increased punch a ProCharger 600B supercharger pushing out seven psi was bolted in place. A Holley pump is mounted in the tank, while lubrication is provided by a Moroso oil pump and seven-quart pan. Exhaust is pushed through a set of Hooker 1.75-inch Super Comp ceramic-coated headers and exits through a set of Dynomax mufflers, all good enough for more than 600 horses on pump gas.

When the engine back to Jack, he started fabbing the air intake out of 3.5-inch stainless tubing. And with the help of Dean, he fabricated brackets to mate the March serpentine pulley system to the ProCharger pulley. He also learned how to bend stainless lines and became an electrical whiz by wiring in the cooling fans and fuse panel and hooking up the F.A.S.T. engine controller. Every step was a new learning experience for Jack.

Next up was the suspension, and Jack knew exactly what he wanted: precise handling. He beefed up the welds on the stock subframe and added Global West control arms along with Hotchkis two-inch drop springs. To get the stance down a bit more, he also installed Global West dropped subframe bushings and a 1.125-inch Hotchkis sway bar. This will keep the Camaro level in the twisties.

Out back, more Hotchkis drop springs were bolted in place, and Bilstein shocks went on all four corners. The sloppy stock steering box was junked in favor of a DSE quick-ratio unit, and Competition Engineering Slide-A-Link traction bars help tame wheelhop when the throttle is mashed. Baer binders provide ample stopping power, and the Camaro rolls on Budnik 18x8-inch front and 20x10-inch rear Shotgun wheels in a brushed finish. Ensuring plenty of grip are BFG KDW 245/35/18 front and 285/30/20 rear performance tires.

For the interior, Jack wanted to keep the Camaro's classic flair, but at the same time he wanted a more comfortable, updated look. He started by fabricating the center gauge console from aluminum. He then used a CNC router to whittle out gauge rings and a shift boot ring from half-inch plate aluminum. "I made rear seat brackets so that the '01 Trans Am rear seat would fold down and latch just as it came from the factory," mentioned Jack. He also mounted the front TA seats and even the '01 factory seatbelt system. Auto Meter gauges keep track of the car's vitals, and a shift light resides where the stock cigarette lighter once was. A killer Kenwood audio system provides the tunes, while a Vintage Air system keeps the occupants cool, even in the scorching heat of Jack's hometown of Glendale, Arizona.

A year after getting the car back from paint, Jack was heading down the final stretch of finishing his ride. With a month to go before the '06 Goodguys Southwest Nationals, he and Dean remained busy finishing up details and crossing things off the list. Friend Craig Trujillo chipped in by stitching up the headliner and other interior tidbits just days before the show. The car was done in time, and Jack was able to cruise to the show with his family. Looking back, Jack reflects on just how much he didn't know when he started his '67 Camaro project, and he's amazed at how well his first rebuild came out. Future plans include having fun with the tangerine Camaro, but he will never forget the blast he had getting to this point, and especially learning what real hot rodding is all about.