This Camaro Street Machine is Straight out of the 1970’s 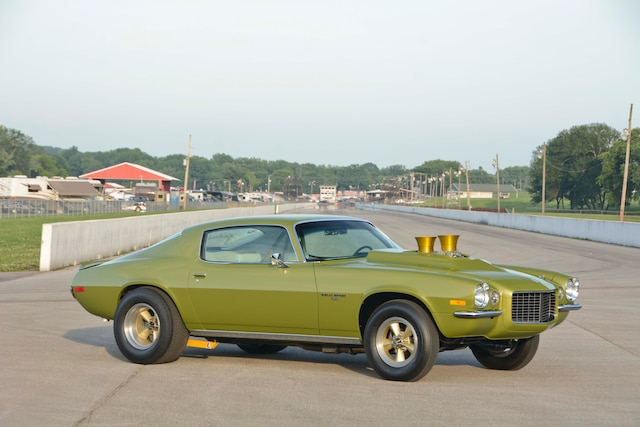 When you think about the '70s, you can't help but think about funky clothes, sideburns and street machines cruising the streets. And while Jeff Mumford probably couldn't grow sideburns in the '70s, the street machines of the era stand out in his mind. Everyone had a different vision for "cool" during the time, whether it was simple bolt-on modifications, or a combination of fender flares, wild paint jobs or diamond-tuft upholstery. Jeff sought inspiration from old car magazines and of course, the Internet, and built this second generation Camaro to match what he would've done in the early '70s.

Jeff has owned this Citrus Green 1970 Camaro Rally Sport since 2003 and intended to rebuild it shortly after purchasing it from a friend. He took it apart in 2004 but didn't have time to really dig into the build, aside from rebuilding the front subframe and suspension. The car sat for a few years, until Jeff got the itch to finish it, and called upon the help of Jeremy Thompson at Thompson Hot Rods, in addition to several friends. Fast-forward to 2017 and the car finally came to life with an undeniable 1970's vibe. From the period correct parts to the jacked-up stance, Jeff's Camaro looks like it's ready for a Saturday night street fight.

While the day-two styling allows the old timers to reminisce the good ol' days, it also serves as an education to the younger crowd. Even though Jeff put a great deal of effort into making his Camaro period correct, he went to even more extreme measures to hide the modern details throughout the car. You're not likely to notice the Vintage Air A/C system, the modern ignition box or the electronically controlled overdrive transmission, but those hidden details make the car user-friendly. In the long run, the intention is to enjoy driving the car, and vintage parts have a tendency to be finicky, so he cleverly disguised the modern items, and allowed the vintage parts to get the limelight. Jeff certainly gave his big block Camaro an excellent mix of real-deal horsepower, old speed parts and even a few factory fresh details, and he plans to show it off every chance he gets.

Who: Jeff and Lisa Mumford
What: 1970 Chevrolet Camaro
Where: Taylorsville, Kentucky
Engine: Even though the original badges indicate a 396ci big block, Jeff's Camaro uses a 454-based big block for power. It's bored 0.030-inch over, making for 460 cubic inches with the use of Ross 10.5:1 pistons. John Triplett built the engine and ported the open chamber rectangle port cylinder heads to jive with the Isky 0.602-inch lift hydraulic roller camshaft. Manley valves and Isky valve springs are put into motion by hardened pushrods and roller rocker arms. Up top is an Edelbrock street tunnel ram, sporting dual Holley 850cfm carburetors and gold-anodized velocity stacks. Other vintage items include Mickey Thompson finned valve covers, factory type GM hoses and a Phase III ignition box, which is strictly for decoration. An MSD 6AL is hidden, and powers the MSD Pro Billet distributor. Hooker long tube headers dump into three-inch pipes and Flowmaster mufflers provide the ultimate muscle car exhaust note. Dale Meers Racing Engines tweaked the mighty big block to the tune of 627 horsepower and 625 lb-ft of torque. What you don't see in the engine bay is the Vintage Air A/C compressor, which is tucked low and painted black, to blend in with the surroundings.

Transmission: Behind the big block is a 4L60E automatic transmission, which may come as a surprise, considering the car's day-two theme. Jeff wanted the Camaro to be highway friendly, even with deep rearend gears, so he went with the modern overdrive transmission. RPM transmissions in Anderson, Indiana modified the GM transmission with its Level V treatment, ensuring it would survive behind the torque-happy big block. The 10-inch torque converter stalls to 3,200rpm. No evidence of the modern transmission can be found, as Jeff operates it with the original horseshoe floor shifter.

Rearend: Out back is a Moser 12 bolt rear end housing, which has been narrowed two inches and fitted with an Eaton differential and Moser 35-spline axles. The 4.11:1 gear ratio keeps the tunnel-rammed big block in its horsepower band, while the .70:1 overdrive in the 4L60E transmission makes for excellent cruising.

Suspension: The suspension is fairly basic, but has a few modifications to give it a tall stance for the 1970's street machine look. Up front, it features a classic combination, with Moroso trick springs and Lakewood 90/10 shocks. Original disc brakes ride up front, while large 11-inch drums ride out back. The rear suspension uses a pair of Calvert Racing split mono leaf springs, which have been re-arched two inches to get the ride height dialed in to Jeff's liking. Lakewood traction bars, and 50/50 shocks round out the rear suspension modifications.

Wheels/Tires: Rolling stock is crucial for a day-two muscle car, and Jeff nailed it with a set of 15x4- and 15x10-inch ET Classic V five-spoke wheels. The gold-painted spokes with rare oval center caps are an excellent throwback, while the old school bias ply tires add another period correct detail. The tall and skinny fronts are Moroso Drag Specials, sized at 7.10-15, while the fat rear tires are Pro Trac tires, produced by Coker Tire and sized at N50-15.

Paint/Body: Thompson Hot Rods handled the bodywork on the 1970 Camaro. Luckily, it was rust-free original body, so Jeremy and the guys straightened and aligned the original panels to perfection. The only modification is the L88 style hood, with a beautifully framed hole for the carburetors. Thompsons Hot Rods applied PPG Deltron paint materials, using the original "code 43" Citrus Green hue. This distinct color inspired the "Snot Rocket" nickname.

Interior: It's hard to miss the bright white interior, even without opening the door to get a full view. It's a great contrast to the green exterior, and it screams 1970, especially with the custom Lakewood-style three-point roll bar, built by John Triplett and painted by Jeremy Thompson. Jason's Upholstery in Louisville, Kentucky is responsible for the installation of the PUI interior components, which are actually for a later model second generation Camaro, as white upholstery was not available in 1970. The mostly stock-appearing interior is outfitted with a Chevy comfort grip steering wheel, Deist two-inch safety harnesses and a chrome Lakewood fire extinguisher.