Believe It! Neil Morley Regularly Drives His 2,000HP Nova on the Street 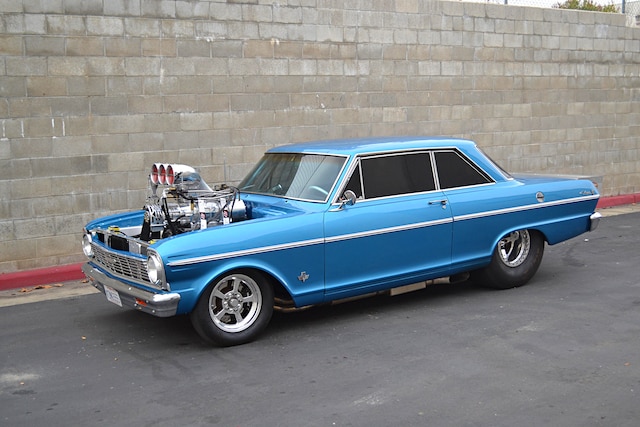 "You see blown-alcohol cars at car shows or on the track, but hardly ever cruising around town or making U-turns," says Neil Morley, owner of this blown-alcohol 1965 Nova. He had just moved his car into position for our photo shoot, and the raucous, supercharged big-block seemed to have attracted the attention of everyone within a half-mile radius of our location.

The street-legal ruckus comes from the 555ci, 2,200hp powerplant that hurtles the Nova down the street and track. Neil actually assembled the engine himself, after some machining help from Motor Machine in Fair Oaks, California. Based on the solid foundation of a New Century tall-deck block and a forged rotating assembly, the real topper is the enormous Blower Shop 14-71 Hi-Helix supercharger that sends gale-force winds into the engine. An Enderle Big and Ugly injector hat sits way up in the wind and injects M5 methanol into the engine to about the tune of 1 gallon per mile.
"The transmission is one area where I have had quite a bit of growing pains," Neil says. "The stout Powerglide I had soon turned into a broken one once we cranked the boost up." The combination of massive torque and the car's 3,600 pounds had Neil snapping input shafts like twigs on a regular basis. Neil tried a few different shafts, made from several different materials, but to no avail. He finally bit the bullet and bought a mega-buck Hughes Transmissions XP4, the same type of transmission that many Pro Mod guys run. "It was the only thing I could get to last."

The Nova's overbuilt attitude continues on toward the rear of the car, where a full back-half chassis and ladder-bar suspension with Santhuff shocks hangs an Alston Chassis Fabricated 9-inch rearend, with 40-spline axles and 4.11 Pro gears. The Nova is undoubtedly a big-tire car, as the custom wheeltubs make enough room for the steamroller-sized 33x15x15-inch slicks that propel the Nova forward at warp speed. "It's a heavy car, but it works pretty good," Neil says, when asked how the car launches. "Our best 60-foot time so far was a 1.26 with hardly any testing, and we hope that will improve."

Yet, with such quick times at the track, the car is surprisingly streetable. "When I put the car together, I took great pains to ensure I could actually drive the thing farther than around the block," Neil says. Everywhere you look, there are a few offerings to the Street Gods that make the car an honest driver. The exhaust, for instance, isn't just for show. After the custom Dow Brothers Race Cars headers, huge, stainless-steel, 5-inch oval tubing takes gases toward the back of the car, where they're funneled into equally massive SpinTech 5-inch mufflers. There's also barely any trunk anymore, as a 35-gallon fuel cell was built especially for the Nova by Dow Brothers. Yes, it's definitely a vehicle that's on the ragged edge, but you can also still drive it.
The interior is one part of the Nova that stayed relatively stock. Sure there are racing seats and a Funny Car rollcage for safety, but the dash, door panels, carpet (yes, it has carpet!) are all OEM-style pieces. "I wanted to still feel like I was driving a Nova, not just a race car," Neil explains. The one big nod to speed inside the car is the RPM Performance Racing Electronics dash, which monitors virtually every parameter going on in the engine, transmission, and rest of the vehicle.

After some aborted passes and breakage, all of Neil's hard work paid off at a recent trip to the track, where he ran a 5.09 at 146 mph in the eighth-mile. As fast as it is, after we had clicked off a few hundred photos, we then hopped in for a rideâat the peak of rush-hour traffic. At every stoplight, smartphones would come out to take pictures and videos, as nearly everyone was amazed by the rumbling Nova. When a 40-something mom in a minivan smiled and started recording, we knew that whether it was on the street or on the strip, Neil's Nova turned out to be a hit.

Tech Notes
Who: Neil Morley
What: 1965 Nova
Where: Antelope, CA

Air and Fuel: A 14-71 Hi-Helix Blower Shop supercharger crams 35 psi into the engine. Enderle's Big and Ugly injector hat and mechanical fuel-injection system supplies the fuel through 12 nozzles under the blower and an additional eight nozzles in the intake ports. ,If that's not enough, Neil also has another 100 to 300 hp worth of nitrous via a custom-made system using Nitrous Supply parts. He hasn't had to hit the button on that system—yet. The engine is lit off via a MSD crab-style distributor and Power Grid and lives via 60wt oil through a Milodon oiling pump and pan.

Exhaust: The eye-burning methanol fuel exits through 2-1/2-inch headers that were custom-built by Dow Brothers Racecars. From there, exhaust exits through 5-inch oval tubing (for ground clearance) and onto 5-inch SpinTech Performance mufflers that kind of quiet it down.

Rearend: Because of the Nova's weight, the rearend had to be ultra-strong. Neil started with a narrowed Chris Alston's Chassisworks Fab 9 housing. From there, the rear was crammed with 4.11 Pro gears, a 1350-series driveshaft, and 40-spline gun-drilled axles, all from Strange Engineering. Potential yoke and driveshaft breakage is curbed by a Daytona pinion support.

Chassis: Since Chassisworks is close to where Neil lives, a lot of its pieces made it onto the Nova. The rear rectangular-tube chassis is from Alston, as is the bolt-on front clip. The cage was originally an 8.50 design, but it was modified by Dow Brothers to meet 7.50 certification standards.