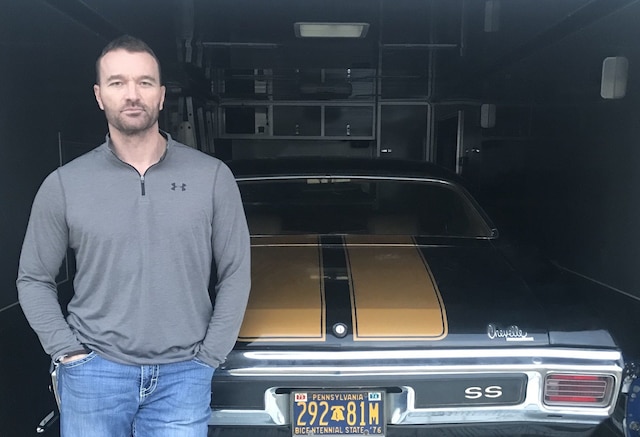 What you're looking at is probably the lowest-mileage, manual-transmission LS6 1970 Chevelle in the world right now. Barn find car hunter Patrick Nichols found it stored in a block building near Pittsburgh, Pennsylvania, thanks to a tip from a friend. Less than twelve hours after hearing whispered murmurs of this car's existence, Patrick hit the road, driving from his home in Tennessee to the Keystone State to check it out.

The car was better than he had imagined, shocking actually. "It's a total time capsule," says Patrick incredulously. Through some local research, he learned the original owner's name was Lee Bianchi, who special-ordered the car from his local Chevrolet dealership. His intentions were to race the car, which would account for his interesting picks on the order sheet, especially the bench seat with a manual transmission. Upon delivery, Lee removed the emissions equipment, added headers, a carb and intake, and took it racing. After a few years, Lee sold it to Steve Furio, who recognized the potential value of the car. He never drove the car. Instead, Steve immediately put it into storage, keeping it in a in a clean, dry building, thankfully. The last time this car was inspected and registered was 1976, and the odometer reads a scant 1,092 miles.

Delivered from the Baltimore assembly plant with white rally stripes, original owner Lee Bianchi had the stripes painted gold because he thought the white clashed with the car's saddle interior. The Tuxedo Black paint is original, however, as is the LS6 454, M22 four-speed, and the 12-bolt rear axle, which is equipped with 4.10:1 gears. The correct four-row radiator is still in place, as are the deep-groove pulleys for the engine accessories. Patrick describes the car as amazing. It is intact, minus a few pieces. Even better, it's completely rust-free, and Patrick speculates that the paint could be buffed to a near-showroom quality shine, it's that well preserved. He even found the assembly line build sheet, complete and intact, stashed in the rear seat springs.

Patrick has gained notoriety as a rare-car and barn find sleuth, thanks to articles in HOT ROD, Car Craft, and through his own social media. As a result, he gets tipped off to rare cars like this all across the country. He thinks nothing of jumping on a plane with little or no notice, heading somewhere to document a new find. Barn finds are all the rage now, but Patrick tells us he and his brothers Derrick and Curtis have been doing this for decades. "It was much harder before the internet. My brothers and I spent hours driving country roads looking for cars," he says. "I love the search; that's the most appealing part of the process", he added. "I believe I was born to do this."

If you're thinking of going to Pittsburgh to track this car down, you're too late. Patrick purchased the car from Steve Furio's widow. On his way home, Patrick brought the Chevelle to its original owner, who was ecstatic to see his old car again and provided Patrick with some old pictures from when he first owned the car.

Patrick intends to document and preserve the car as it is: a stunning example of one of Chevrolet's most iconic muscle cars. Watch the video to see some of the options and components that make this car unique.