Backyard Built, This 1970 Chevelle was Made to be Driven Hard 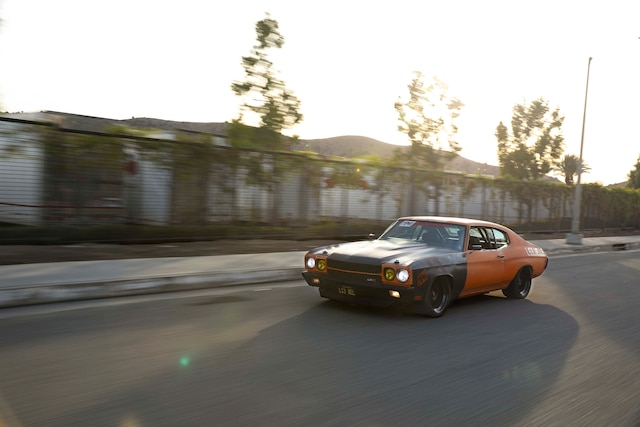 If you spent a lot of money on a car, would you even drive it? Would you just trailer it everywhere, or would you thrash the hell out of it? Over the course of 10 years, Robert Ortega has slowly invested more than $40,000 into this project, despite the fact that it's still doesn't have a headliner.

You may know Robert's work by his Instagram nickname, LS3Velle, and this project has its own nickname, Orange Juice. Despite this car being his first muscle car, a long-time daily driver and the car he proposed in, it's actually his second hot rod build. This particular 1970 Chevelle was the spark for Robert's family of 1970 Chevelles- he currently has three: two with LS3s, and one with an LS1.

Robert's first build was a full-tilt Pro Touring style with glossy, metallic paint and full leather interior. Orange Juice has no bodywork that wasn't performed from either Chevrolet in 1970 or the environment, but it took just as much work and planning as his previous build. "I wanted to build it this way, because I'm more comfortable with how it looks versus having a nice show car," said Robert. "I get in it and do what I want. I don't care if it gets scratched."

Robert picked the car out of Echo Park, California, for $3,500 from a Craigslist ad ten years ago. White, with a well-worn interior and stock small block, it became Robert's daily driver for many years, while the other Chevelle was being built. In the meantime his girlfriend became pregnant.

During an afternoon trip to the Rose Hill Cemetery, overlooking LA, he popped the question. "I had to do it, I just felt comfortable in there, and I didn't know where else to go," said Robert. "It caught her by surprise." He asked right there in the driver's seat.

His other love, Orange Juice, went under the knife shortly after the proposal, with a complete CPP suspension and brake kit. It then returned to daily driving duties. "I always put it to the side, something always came up," said Robert. "This was my first baby, but the second one I finished building. It's gone through many stages of me taking it apart and redoing it."

When he finally decided to cut into the car again, "I wanted to go hardcore," said Robert. The body came off the frame and was pushed into the backyard where it he added mini-tubs and boxed the frame. A few months more passed, and Robert had the frame powdercoated. Eventually he got around to installing the engine and finishing the metal work on the firewall and floorboards. He moved it into the garage when the suspension parts and wiring arrived.

Robert performed his first LS swap came after extensive message board and YouTube searches, as he doesn't consider himself an experienced mechanic. The second project was a lot easier: he picked up the Summit catalogue and ordered a Connect and Cruise kit from Chevrolet Performance. The kit includes everything you need to turn the key on a LS3. "It's different. Not a lot of people are building cars like this, because everyone wants a show car," said Robert. "Mine is all new underneath, but outside it has that rough look to it."

At the time of our photoshoot, the car only had 700 miles on the new drivetrain, and Robert claims there hasn't been a single issue. "Yeah, I just started burning rubber," said Robert. The Chevrolet Performance kit allows for some tuning, so Robert does plan for dyno pulls.

The LS3Velle isn't a new way of doing things, it's nearly traditional, but still unique. About its unfinished look, well, that's all finished according to Robert. When we asked about his future plans for the car, he responded, "Maybe new tires. Right now, I'm just enjoying the hell out of it." The car is rough, it rattles and shakes at idle, but it runs strong, and does big smokey burnouts. Is it for sale? "Absolutely not."

Orange Juice is powered by a Chevrolet Performance LS3 6.2. It makes a claimed 525hp to the flywheel. The internals are all stock including the hydraulic roller camshaft with a .0525-inch lift, Nodular iron crankshaft, and aluminum block. He opted for the Chevrolet Performance Connect and Cruise Powertrain System, which includes everything you need to turn the key on a LS3: the LS376/525 Engine Controller Kit, the Transmission install kit, gas pedal and any of the electronics needed to make the powertrain run in almost any car. It also comes with your choice of automatic or manual transmissions, and Robert opted for the latter, a T-56 Magnum and LS7 clutch.
Some of the ancillary components include Holley's Retrofit oil pan to clear the A-body's crossmember, their cast iron headers that dump into a 3-inch Black Widow exhaust, and their accessory drive system. He also installed a complete wiring system from American Auto Wire.

Drivetrain: Robert called on Cook's Machine Works in Los Angeles to build him a custom driveshaft. Putting rubber to the road is a full floating Currie Enterprises, 35-spline FAB9 rear axle with 3:89 gears.

Suspension: The Chevelle features full tubular UMI Stage 5 suspension. Thekit offers a wide range of adjustments, as well as refined geometry. It turns this A-body into a corner carver. The factory bump stops are gone and the spindle height is raised 1.4 inches via taller upper and lower ball joints, which according to UMI, improves chamber gain and puts the tires in better contact with the road. He installed ATS 2-inch dropped C6 spindles and Viking Crusaders double-adjustable coilovers to replace the springs.

Wheels: This combination makes for a far-from-factory stance, and rounding out the package are the forged, three-piece CCW Classics wheels. They measure 18 by 10.5 inches all around, but the front wheels have a 5.5-inch backspacing, while the rears have 6-inch backspacing. Tires are Falken 315/30-18s and Robert claims there's no rubbing.

Brakes: Stopping power comes from Wilwood C6 Corvette 4-piston calipers all around, with 14-inch rotors in the front and 13-inch rotors in the back. A Wilwood line-lock proportioning valve and an off-the-shelve master cylinder round out the brakes.