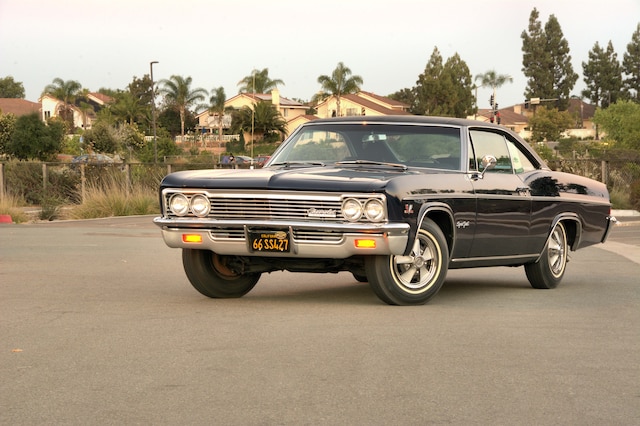 In 1965, GM introduced entirely new fullsize cars in the Buick, Cadillac, Pontiac, Oldsmobile, and Chevrolet brands. At the time, hard as it is to believe now, GM controlled more than 50 percent of the U.S. new car market. There was even talk of breaking up GM into two or more companies because it was seen that the company had an almost monopolistic control of the domestic marketplace. How quaint that seems today, right?

What set apart the fullsize GM cars was their styling. Their fullsize Chrysler and Ford competitors seemed dowdy by comparison, even given that both had all-new fullsize models in 1965 as well. GM's styling signature was a Coke-bottle look with pronounced rear fenders and a very sloped, almost fastback roof line on the two-door hardtop models. All models featured curved side glass, enhancing the look.

Underneath the sleek, contemporary body was an all-new perimeter-style frame. Gone was the X-frame that dated back to the 1959 models. And the suspension was upgraded with full coil springs that gave a substantially improved, almost Cadillac ride.

Among the fullsize GM cars, Chevrolet offered an almost bewildering number of models at the start of the 1965 model year, including sedans, hardtops, station wagons, and convertibles over the Biscayne, Bel Air, and Impala series. And midyear in 1965, Chevrolet introduced a top-of-the-line Caprice Custom Sedan as a four-door hardtop model. In 1966 it became Chevrolet's top series, replacing the Impala much as the Impala replaced the Bel Air as Chevy's top model series in 1958.

All of this sets the stage for 1966, when the fullsize Chevrolet models received a substantial restyle with both ends receiving a more formal, squared-off look. While the Caprice series stood atop the fullsize Chevy lineup, its emphasis was on luxury, not sportiness. For a sporty, fullsize Chevy, one would opt for the bucket-seat Impala SS. The SS series was introduced in 1961, and until the introduction of the Caprice as a standalone model in 1966, the two-door hardtops and convertibles were the most expensive fullsize Chevrolets.

That brings us to the 1966 Chevrolet Impala SS two-door hardtop shown here, owned by Stephen Halluska. Our path and his Danube Blue with black vinyl top fullsize bruiser had crossed many times over the years, at the La Jolla Concours d'Elegance, at the annual Qualcomm Stadium Swap Meet in San Diego, and finally at the 2016 San Marino Motor Classic. There it competed against traditional big-block muscle cars because of its 390hp, 427ci V-8 coupled to a four-speed manual transmission. A year later, in the summer of 2017, we finally got the opportunity to photograph the car and speak with Halluska about its history.

First off, you can say this car has come full circle. It has returned to Southern California after having been manufactured at GM's Van Nuys assembly plant. This is a facility that built hundreds of thousands of fullsize Chevrolets cars from its inception until 1992, when it was shuttered as GM moved production of the Camaro and Pontiac Firebird to Quebec.

The car was delivered to its first owner by Capitol Chevrolet in Salt Lake City. By the 1990s it had made its way to Oregon, where it was owned by a retired priest who had amassed a collection of fullsize Bowties. During this time Halluska developed his own attraction to 1966 Chevrolets after starting with his first love, the 1962 models. His first 1966 Chevy was a 327 Powerglide model acquired from its original owner out of New Mexico. After he owned several 1966 models, his quest focused on the rarest of the rare, a 427 Impala Super Sport equipped with the four-speed manual transmission.

At the 1993 gathering of the 1965-1966 Fullsize Chevrolet Club, Halluska connected with Reverend Hank, as he was known. He had three 427 Chevys, including a 42,000-mile, 427/four-speed model that was the object of Halluska's desire. At the time, Reverend Hank was unwilling to part with it, but the two remained in contact.

Halluska continued his quest, building up a stash of rare and N.O.S. 1966 parts until two years later, when Reverend Hank offered up the car to him after sending him a comprehensive set of photos. Halluska wasted no time and jumped on it immediately. In his eyes, he now had the Holy Grail of 1966 Impalas, a 427, four-speed, two-door hardtop.

To finance the acquisition of the car, Halluska sold the original New Mexico car, but not before removing from it many of the highly-prized N.O.S. parts that would be used in the restoration of the 427 car. The Impala SS arrived in San Diego in January 1995, which started a two-year-long restoration effort. The car was in good condition overall but at some point had acquired a coat of yellow paint. It would require a comprehensive restoration to bring it up to Halluska's exacting standards.

Over the years, the Impala's original window sticker had remained with it, so Halluska knew exactly what would be required to return it back to the level of perfection it displayed when it rolled down the Van Nuys assembly line 29 years earlier. The two-year restoration included replacing the trunk floor, rusted out due to a missing decklid seal, and rust repair was required on the rear quarter-panels. After the body had been prepped, the car was painted locally in its original Danube Blue by Bennie Macias. For the interior, the front seat upholstery was replaced, while the original rear seat upholstery was redyed to match. The mechanicals—the engine, transmission, and front suspension—had been rebuilt previously by Reverend Hank, so they required little attention. The dual-exhaust system needed replacement, and the brakes were rebuilt.

In January 1997, Halluska's high-powered Impala returned to the road and found its restoration featured in Classic Auto Restorer magazine as well as a three-page story in Super Chevy. Photos of the car also appeared in two books, Chevrolet in the Sixties and Impala: 1958-2000. It is apparent from our photos that Halluska has carefully maintained the Impala, as the car presents itself as if it is a recent, fresh restoration. About the only visual change over the 20 years was the replacement of the original wire wheel covers with the even more attractive RPO N96 Z-16-style simulated mag wheel hubcaps most often seen on Chevelles but offered on the fullsize Chevys as well.

When we first encountered the car more than two years ago, it was the four knobs mounted in the center console that attracted our attention. While the U79 option, first offered in 1965, was offered across the Chevrolet lineup, including the Corvair, the controls were usually mounted in a pod below the dash. On an SS model, the controls for the volume, tone, balance, and fader were mounted between the seats in the console where today one might find controls for a multimedia and navigation system. Back in 1966, the navigation system consisted of road maps that were given away free by most service stations—another institution that has disappeared over the years.

While either the 427/390 L36 or the 427/425 L72 were low-production engines for the Impala SS, they were not the lowest. Almost all Impala SS models were equipped with V-8 engines, though 823 two-door hardtops and just 89 convertibles were equipped with the 250ci, 155hp straight-six. Who would have thought?

While we drove to the location where we photographed Halluska's big brute Impala SS at sunset, when the light turned green he simply couldn't resist pushing the pedal to the floor. The smile on his face told us everything we needed to know. (In 1966 Motor Trend tested the 390hp 427 Impala SS and found that it went from zero to 60 in 7.9 seconds and would cover the quarter-mile in 16.8 seconds with a trap speed of 88 mph.)

Halluska's Danube Blue Impala SS Sport Coupe is not a by-definition muscle car, an intermediate model, like the Chevelle, with a big engine. It is a muscular car. It was manufactured at a time when the Big Three offered high-powered engines in their fullsize cars for a combination of size and power that was unrivaled. The 427-powered fullsize Chevys stand at the top of this exclusive class.

Stephen Halluska waited two years until this Impala SS's previous owner decided he would part with it, and then spent another two years restoring the fullsize Chevy. That restoration was completed 20 years ago, but the car still looks fresh out of the paint booth.

Chevrolet offered the 427-inch big-block in every model from the base Biscayne two-door sedan to the Caprice six- and nine-passenger station wagons, according to the 1966 Chevrolet brochure. The L36 version in Halluska's Impala was rated at 390 hp.

During the restoration Halluska replaced the front-seat upholstery but was able to reuse the rear seat covers. The RPO A81 headrests were a very rare option, appearing in less than 1 percent of the fullsize Chevys built in 1966.

Another rare option aboard Halluska's Impala is the external stereo amplified four-speaker package. The four dials in the center console control the AM/FM radio's volume, tone, balance, and fader.

Though typically seen on Chevelles, the N96 Z-16style, mag-wheel hubcaps were also available on Impalas in 1966.

The fact that the Impala's window sticker was still with the car made it easier for Halluska to determine what was needed for the restoration.

Halluska proudly displays the Junior and Senior awards his Impala has earned from the Vintage Chevrolet Club of America.