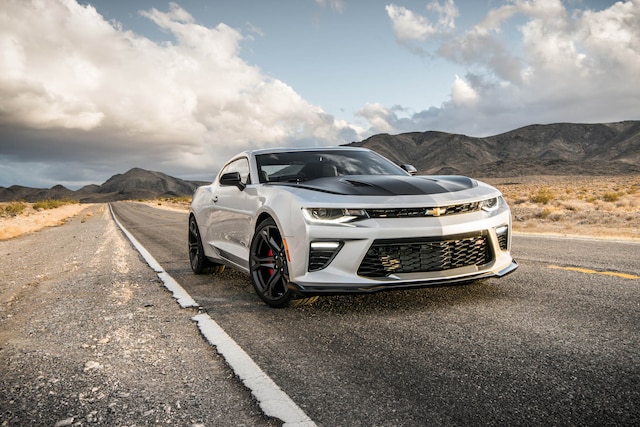 As soon as we got behind the wheel of the sixth-generation Camaro in late 2015 it was apparent that the new Alpha chassis was special. The SS seemed tighter and more responsive, and the lighter weight was apparent. We were impressed, and had to keep reminding us that it was "just the SS" as we knew there would be even more performance-oriented variants to come. While the ZL1 has been making news with its supercar-like lap times, it's the 1LE that we've been looking forward to driving lately. Since the 1LE package debuted in the third-generation Camaro, it has been a bit of an underdog, getting far less attention than the powerhouse ZL1 and legendary Z/28, but those who pay attention to Camaro's history know it as an affordable, no-nonsense track car. Considering the sixth-gen Camaro had such a head-start in the handling department, we had high hopes for the 1LE. Chevrolet invited us to drive several 1LE V6 and V8 Camaros on the roads around Death Valley and at Spring Mountain Motorsports Park in Pahrump, Nevada.

We began by driving a 1SS model on a 100-mile loop of city and highway roads. The standard magnetic ride suspension uses a different tune than the SS, but still soaks up jolts. We spoke with Camaro chief Al Oppenheiser, who told us that 1LE buyers expect a tighter handling car, so the Touring setting has a heavier steering feel and more road feedback than the Touring setting in the standard SS. Dial in the Track setting and the suspension firms up significantly. Sport mode splits the difference.

The V8 1LE is placed in the Camaro lineup much like the Grand Sport is in the Corvette lineup. As the Grand Sport borrows the suspension and brakes from the Z06 and pairs it with the naturally aspirated LT1 powerplant of the Stingray, the V8 1LE uses a track-tuned Magnetic Ride Control suspension, 3.73 electronic limited-slip differential, and improved six-piston Brembo brakes like the ZL1, but with the naturally aspirated, 455hp LT1 V8 engine of the SS. The 1LE package also adds dual-mode exhaust and forged aluminum wheels that are 1.5 inches wider than its V6 1LE counterpart with 285/30ZR20 front and 305/30ZR20 rear Goodyear Eagle F1 Supercar tires. Yep, that's right, there's a V6 1LE for the first time ever, more on that later.

On track, the SS 1LE's wider, forged wheels with wider, stickier Goodyear F1 rubber offer impressive grip, even when hot-lapped and pushed as hard as we were able. The SS 1LE is a capable of 1.02g lateral acceleration and handles track curbing without losing poise. Its increased torque compared to the V6 means that it requires more judicious use of the throttle when cornering, especially as it builds driver confidence with a balanced feel and predictability. With 455 hp on tap, straightaways are swallowed up quickly and the SS 1LE's massive 14.6-inch front and 13.3-inch rear rotors can be called upon time and again to scrub speed.

As it was in the fifth-generation Camaro, the 1LE is a great value in track performance. Add just some of the standard parts that are included on the 1LE, like the six-piston brakes, dual-mode exhaust, and magnetic ride suspension, and the price of a standard SS would quickly approach the $44,400 starting price of a 1LE.

The V6 1LE was built with the same philosophy, this time raiding the SS parts bin. The 335hp V6 is paired with the FE3 suspension that uses the dampers, stabilizer bars and toe links from the SS. It also borrows the track-ready fuel system and 12.6-inch, 4-piston Brembo front brakes. Like the rest of the Camaro V6 lineup, Magnetic Ride Control is not available. While it's down more than 100 horsepower compared to the LT1, the V6 offers plenty of track capability, with Chevrolet claiming lap times comparable to the LS3-equipped fifth-gen 1LE. Its forged wheels, 20x8.5-inch front and 20x9.5-inch rear, wear 245/40R20 and 275/35R20 Goodyear Eagle F1 tires that are well-matched to the V6's capabilities.

With a higher final drive ratio and less torque than the LT1, throttle inputs from the V6 don't upset the car as they do with the SS, allowing earlier full throttle application when exiting a corner. The six-speed is the only transmission available with the 1LE and we found that third gear was a good match for Spring Mountain's track with the extra RPM available from the V6 meaning fewer shifts were necessary. Unfortunately the V6 isn't available with the active rev matching of the SS. Turning the rev-matching on gives the driver one less thing to worry about when plotting a racing line and gunning for better lap times and was greatly appreciated in the SS. With our limited track experience with the 1LE, the V6 offered plenty of grip and power to reach its handling limits. Our takeaway is that for $32,895, $5,000 less than a base SS, the V6 1LE offers a tremendous amount of track fun.

1LE Camaros can be identified by their black-wrapped hoods, black mirrors, black splitter, and black rear spoiler. The V8s use a vented hood and the driving lights are a horizontal strip, while the V6 uses vertical light bars.

Both the V6 and V8 1LE are equipped with suede steering wheels and short-throw shifters, dual-mode exhausts, and coolers for the engine oil, differential, and transmission.

The well-bolstered Recaro seats are standard on the SS 1LE, optional on the V6 models.