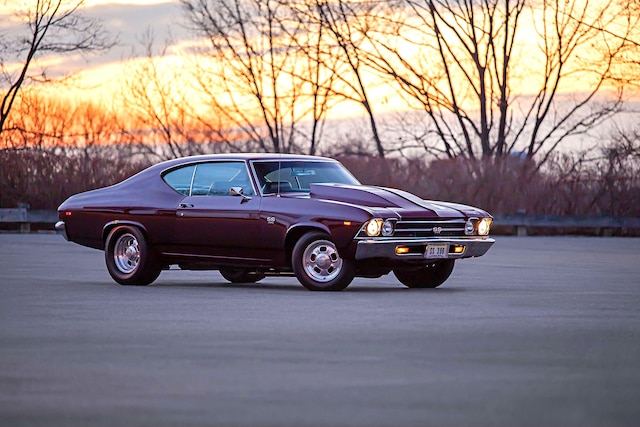 When we asked about his cool car background, what his wife, Mary Ann, thought about his smoldering urge, John G just smiled a little and said, "She loves all eight of my vehicles." Surely that must be a manifestation of true devotion. It's always a good thing when your clear-thinking better half is there to nurture your affliction.

He didn't know it then, when he was a kid, but he was already a goner. It was John's car-collecting father who drew him into the life. And the life that was then is here today. The idea was to source as much of the work or the product from the finite resources that have always abounded in and around north Jersey. We grew up in the same Bergen County environs as John, but with a couple decades separation (Paterson's Gasoline Alley, where Dick Simonek built the engines for our D/G 210 in the early '60s, is long gone).

What was John after and then where would he go to get it done? "I have always wanted to find a '66 or '69 Chevelle. I found this '69, it was for sale on the owner's front lawn. Next minute I knew, I'd owned it." John spun the car up on a rotisserie, took parts off it, and removed the frame from the body. He discovered, "it was a true 1969 SS 396, but missing the original engine and transmission. It did have a 396/325 engine, no numbers-matching anything. At the time, I rebuilt the engine and the M21 four-speed."

The Chevelle had been living rough, though, and needed a complete restoration. At this point you blindly commit or you broom the mess and search out something a lot less needy. John committed, but later on admitted that if he ever found himself in the land of slow car death again, without question he'd purchase a heap already restored.

The Chevelle cried for solid floors in the trunk and new rear quarters, and John discovered the most challenging part of the deal was making the panels line up true, making the gaps square and even. In Bloomfield, John saw painter Anthony Tronio at Advanced Auto Craft. Advanced treated the sheetmetal and Tronio mapped it with rich and provocative PPG Vintage Burgundy.

Gestation was longer than you'd like, about six years from the time the car went on the spit, but he says he did most of the work and that his most memorable time with the A-body was pinning it with all the trim, the bumpers, handles, emblems, grille, and lights. Ausley's Chevelle Parts in Graham, North Carolina, plated or polished all the bright stuff.

There are the powerful way-back clues, insignia if you will, of old times. It's probably been 40 years since we saw those freaky (but now very nostalgic) NMW ladders beneath an ox cart or a hot rod, though not quite so long for those vintage Mickey Sportsman Pro fatties. Are they fake-outs? We think so, though the underlying mechanical force is current, formidable, and runs reliably. We guess you'd call John's SS a street and strip bandit, got those big 'n' littles on it. But it's also got drop spindles, tubular control arms, and the semblance of something serious.

In the fall of 1968, the Chevelle SS was available with a 396, so the logical progression would seem to be something a little larger, like a 427. As Gasoline Alley in Paterson had long been the main attraction, the place to go in the old days, Paterson's Ceralli Competition Engines soon became mecca. Bill Ceralli filled the '68's cylinder block with a complement of hard parts gathered around an Isky hydraulic roller. Iron cylinder heads are nothing special, either, but the whole generates 469 lb-ft and 525 horsepower, and that's plenty for John G's mission.

Hand work is always heart-warming. John showcased the engine compartment with a tough-looking snorkel cold-air intake system built by Spectre Performance, which in turn dictated the clearance afforded by the 4-inch cowl hood. Managing the big-block's guff is a TCI Turbo 400 twirling a Breakaway converter with a 2,400-2,600-stall speed. A B&M ratchet hits the mark every time.

The cockpit is subdued and unassuming, but bubbling with comfort and convenience, too, Vintage Air wafts, bumpin' audio wall makes you forget about texting and the urge to share your good spirit with mean-spirited yahoos, and think you're somewhere else. Sink into premium seats; between them the custom YearOne center console. A nice place to pass the miles because the Chevelle gobbles them up like it was in a hot dog eating contest.

That's the time when John G fondly reminisces the six years it took get here by his wits, Mary Ann's pioneer mentality, and where he would be were it not for his father's devotion to him and to the sport. John G's most appreciative of the Chevelle's performance and the quality of its ride, something he feels every time he is going to a show or crankin' out on a cruise night. That's the very best part about all of this. CHP