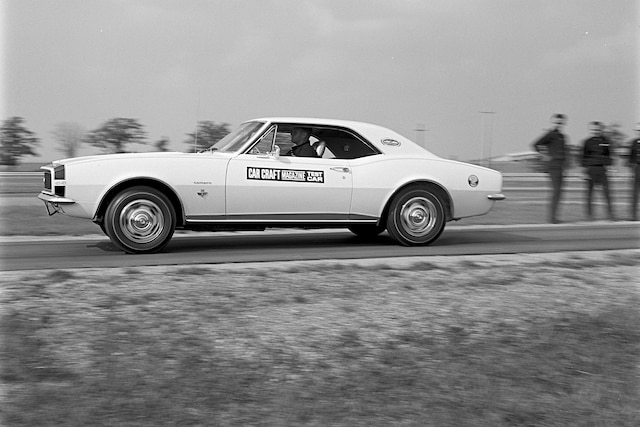 In mid-September 1966, members of the Coachmen Auto Club of South Bend, Indiana, gathered at GM’s Milford Proving Grounds outside of Detroit for what must have been a dream day: check out—and drive—Chevy’s all-new Camaro, and be featured in a magazine for doing it!

The Camaro had gone on sale just days before, and Petersen’s Dick Scritchfield wrangled a couple different Camaros for these young men to explore as part of Car Craft magazine’s car club road test series. The photos in the Dec. 1966 issue show the guys climbing around and driving an RS/SS 350 model, which means that not only were they getting their hands on the all-new Chevy, it was powered by the all-new V-8 to boot.

Coachmen club president Dale Dabrowiak called the 350 “a great combination for the car’s 3,000-pound weight.” Elsewhere in the story Scritch expressed his disappointment at the 350’s 295hp rating, pointing out that the “super rump rump” L79 version of the 327 produced 350. “We are told engineering has reevaluated to a more accurate figure,” he wrote. “Or can it be competition was a bit stiff in B/Stock class?”

Dabrowiak figured “with proper tuning and a few goodies here and there, you know the performance buyer is going to make the acceleration even more exciting.” True that.

Coachman Larry Allen, who raced the club’s Chrysler-powered Bantam roadster and his own dragster, got the nod to “try the Camaro’s ride and handling characteristics.” It didn’t take him long to find one of the car’s weak links: “The rear suspension leaves a lot to be desired on standing-start acceleration. The single leaf springs will definitely need help in keeping the rearend from winding up. Although one of the cars I drove had a stabilizer bar on the right side of the axle housing, I still got a lot of wheel hop when coming off the line at 6,000 rpm. The standard suspension would wind up at 3,000. I believe two stabilizers and a pinion snubber would be necessary to really control it properly.”

The new car’s long hood/short deck styling got a thumbs up from member John Underhill, saying it gave the Camaro “the real sports car look.” The Camaro’s innovative new front end, with a choice of grille designs and “bumblebee” racing stripe “…will certainly give the customizers something to think about,” he said. “The strange part about it is, it looks great. Having two completely different grilles as an option must be a first of some kind. With the increasing popularity of the hidden headlights, the RS option will be the most popular with the automotive enthusiast.”

When not quoting the club members, Scritchfield spent a lot of the article introducing CC readers to the new car and its various driveline, chassis, and interior options. As Coachman Bernie Berkland put it, “With so many options, you can have the same basic model as your buddy, but have an entirely different looking car.”

“From all indications this is going to be a Camaro year,” Scritch said in sum, referring to racers who will drive it in C/Stock as well as a few who were already “easing Chevy’s super 427 under the Camaro’s bonnet.” Given its “Chevrolet tag and the popular options offered, Chevy’s new sports model is bound to burn its name into the record books.”