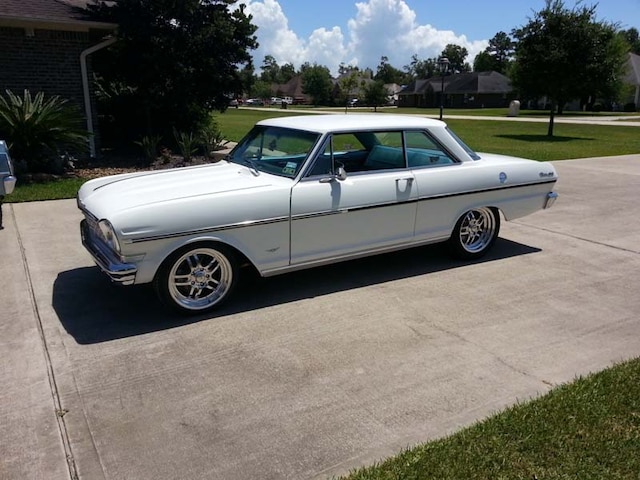 "I fell in love with Novas when I was 8 years old. My dad and I were at the Toppers Car Show in Fargo, North Dakota, and there was a beautiful white 1962 Chevy Nova there on display. I remember my dad saying that Novas don't get the respect they deserve, but that early Novas were his favorite. I guess one always wants to be like Dad, so after seeing his eyes light up and how excited he got seeing that car, I decided that one day I would own an early Nova."

In 2013, 19 years after Matthew Christenson's trip to the car show with his dad, he found this 1963 online and bought it.

The Nova was a frame-off rebuild, meticulously done by its second owner, Carlos Cruz in Ohio. In its rebuilt form, the car featured a carbureted 383 stroker engine with Dart heads and Hooker headers, a 4.56:1 12-bolt rear with a Posi and numerous other performance components. "It came with everything necessary to run a quarter-mile in 11 seconds. What I wanted was a car that my wife, young daughter, and I could cruise in anywhere at anytime without worrying about it breaking down."

On stevesnovasite.com, Christenson learned about Tom Munsch of Hot Rods by Tom in Baytown, Texas, who specializes in LS conversions of muscle cars "I watched him to redo a few cars, contacted him, and we came up with an agreement to do a complete overhaul. I handed over the Nova and 10 months later we had a completely new car that looks 54 years old but handles like a modern car. I also got ahold of Chuck Church from Church Boys Racing who specializes in Novas. One of his first triangulated four-link rearends was put on the Nova." In addition to the four-link, the new chassis uses Church Boys Racing front control arms plus power rack-and-pinion steering. Double-adjustable shocks are mounted front and rear. The rearend features 3.73 Yukon gears with an Eaton Posi differential.

The exterior retains the factory look. Carlos Cruz had delivered the car to his native Puerto Rico for the Toyota Super White paintjob. The 15-inch Weld wheels that were on the car have been replaced by 17-inch Launch wheels from Billet Specialties' Street Smart Line series. The Nova is now powered by a 6.2L LS3 crate motor, backed up with a 4L65E transmission.

Matthew, his wife, Jessica, and their young daughter, Sophia enjoying cruising around Abilene, Texas, in the Nova. They also love taking it to car shows around Texas. Future plans include taking the car to the gulf for Cruisin' The Coast, and to follow Route 66 to Highway 1 up the California Coast.

"The Nova represents a childhood/family dream come true and serves as a bond between my dad and me," Matthew says. It's also an automotive bond with his daughter, Sophia. "She loves our car and refers to it as the 'fast car.' She yelps in joy the faster we go—which I guess could be a bad thing in a few years when she starts driving on her own."