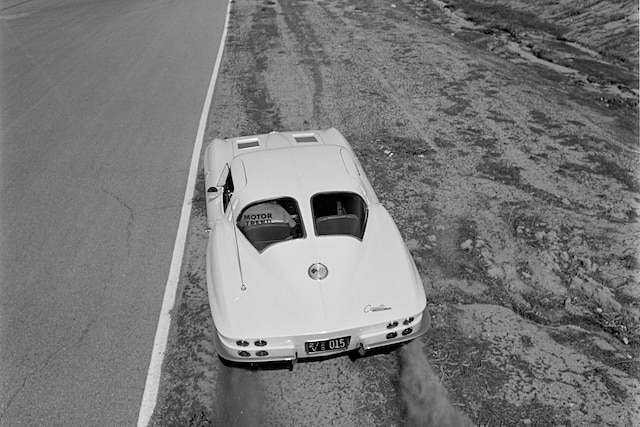 Motor Trend magazine began teasing readers with sketches of the all-new 1963 Corvette in the summer of 1962, published its first photos of the car in the Nov. 1962 issue and did a comprehensive technical analysis of its chassis in Jan. 1963. But the editors waited another four months before putting a coupe to the test and on the cover of the May 1963 issue.

With that kind of perspective, Technical Editor Jim Wright opened his story talking not about the car's striking redesign, or its performance on the road (or track), but about its performance on a different level: at the showroom.

"For the first time in its 10 year history, the Corvette Sting Ray is " read the headline across the story's opening pages. The sentence continued on the next page, " in such demand that the factory has had to put on a second shift and still can't begin to supply cars fast enough. The waiting period is at least 60 days, and dealers won't 'deal' a bit on either coupes or roadsters. Both are going for the full sticker price, with absolutely no discount and very little (if any) over-allowance on trade-ins."

Wright told readers they were "happy to see the Vette get the public acceptance we've always felt it deserved." And yet, the magazine was worried about the car's future. Chevrolet, Wright said, "has never really made any big profits on the Corvette, but the Chevy brass was more than satisfied as long as it carried its performance image and prestige over to the bread-and-butter lines. As long as the factory kept building the car on this basis it would be a great automobile, but if they ever put it on a straight dollar-profit basis, the Corvette would probably be ruined."

Fortunately, "they haven't ruined it yet, but our test car showed definite signs that the factory might be getting more interested in dollars than in prestige." In terms of styling and performance, the new Sting Ray "is an even greater car than its predecessors," he wrote. "But for a car that sells in the $4,500-$6,000 range, it doesn't reflect the degree of quality control we feel it should."

What was wrong? "There still seems to be some difficulty in manufacturing a really smooth fiberglass body," Wright said, making note of ripples in the body, and door and hood gaps "that were wider than they should have been." The interior, he said, "had an unfinished look." While the upholstery and carpet were "top grade," door and window moldings weren't "too well designed, and it doesn't take much laxity of quality control on the assembly line to make them look really bad." These complaints, he admitted, "aren't earth-shaking faults or defects, and have absolutely nothing to do with the operation of the car." But they were, in his view, "of the sort that a discerning owner and driver will be constantly aware."

QC worries notwithstanding, Wright's test car carried an options list anyone would envy. Under the hood was a fuel-injected 327 making 360 hp and 352 lb-ft of torque. It was backed by a close-ratio four-speed manual transmission and a Positraction rearend with 3.70 gears. The drum brakes wore sintered-iron linings that were "practically impossible to fade," Wright said. Non-performance options were limited to power windows, an AM radio and whitewall 6.70x15 Goodyear Super Cushion Deluxe bias-plies. Those options pushed the coupe's $4,393.75 base price to $5,321.70.

Acceleration numbers were similar to the 1962 model, Wright said, with the car going from 0 to 60 in 5.8 seconds and running the quarter-mile in 14.5 seconds at 102 mph. "Top speed was an honest 130 mph, with the tachometer reading 6,000 rpm. A course longer than the Riverside Raceway backstretch would've produced something very close to the Sting Ray's theoretical top speed of 140-142 mph (with 3.70 gears) because the engine was still winding when we had to back off."

Where the new car departed from first-generation Corvettes was in its handling. "We thought the old model cornered darn well, but there's no comparing it to this new one. It does take a little different technique, but once the driver gets onto it, it's beautiful. Since the 49/51 percent front-to-rear weight distribution, plus the independent rear suspension, gives the Sting Ray an inherent amount of oversteer, the driver will find that on fast corners the car will be doing most of the work through the corner instead of him powering it through."

As you might guess, the coupe's signature split rear window took its share of lumps. A photo caption said it "definitely hampers vision," while Wright ended his review saying, "The rear window on the coupe is designed more for looks than practicality, and any decent view to the rear will have to be through an exterior side-view mirror." Vette