This 1957 Corvette Shakes the Streets 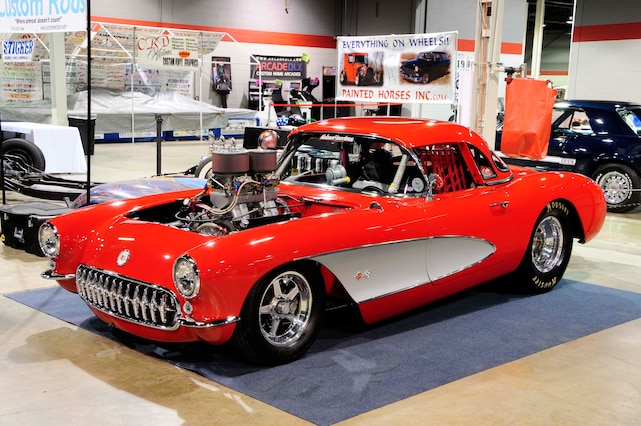 It's not every day that you have the opportunity to display your car with some of the hottest rides on the ISCA show car circuit then get it home, fill it with race fuel, and go drag racing. For Mark Pappas of Park Ridge, Illinois, his 1957 Chevy Corvette not only looks great under the lights, it shakes the local streets and then it runs blistering quarter-mile times at countless racetracks across the country.

Everyone gets indoctrinated into hot rodding on a personal level and for Mark it was no different. His journey began in 1973 when he first saw American Graffiti and immediately got consumed with its on-screen portrayal of hot rodding and its culture in the early '60s. It wasn't long till he was in high school and ready for his first car. He started with a 1957 Chevy Bel Air packed with a small-block V-8 and immediately became a part of the local cruise scene hanging out at the Jack in the Box along while also checking out plenty of late night runs on the streets of Addison. As the years passed he moved onto a slew of hopped-up Chevys, including Camaros, a 1966 Chevelle, and eventually a 1964 Corvette.

Somehow though, something was missing. Over the decades he became more attracted to drag racing and had always envisioned owning a car that could do double-duty on the street and 'strip. There was only one stipulation; it had to be a vintage Corvette. Well over a decade ago he began the search for a suitable car to start with till he located a 1957 Corvette. The car was a stripped-out roller that barely survived a failed attempt by its prior owners to transform it into a race car. What was there was salvageable so a deal was made and the car was hauled home. This is a car that evolved over the last 10 years from an 11-second Pro-Street car to an ISCA-level show car and finally into an 8-second dual-purpose street/drag car.

For a rock-solid base Mark went to Chris Duncan Race Cars (CDRC) in Chandlerville to design the chassis. The team fabricated a 4130 chromoly frame with custom crossmembers all built to racing specifications. Out back a FAB9 rearend housing was assembled with 41-spline Strange Engineering axles turning 4.56:1 gears hung in place by a custom four-link with antiroll bar and double-adjustable Strange Engineering coilover shocks. Up front a custom strut suspension designed by Adam Drzayich of Hickory Hills features Strange Engineering struts and spindles as well as a Flaming River rack-and-pinion. If you're going to go fast you'd better be able to stop on a dime so a Strange Engineering dual bowl master pushes fluid through stainless lines to matching 12-inch slotted and drilled discs all around with two-piston calipers rear and single pistons in front. Linking it all to the street, a set of custom Billet Specialties 15-inch wheels in 3.5-inch front and 15-inch rear widths wear Hoosier Quick Times rubber.

When it came time to assembling a purpose-built engine capable of scorching times at the track Mark went to Reher-Morrison Racing Engines of Arlington, Texas, to assemble a 565ci big-block Chevy. Starting with a fresh Dart Big M aluminum block, the team massaged it to perfection and filled it with a Crower forged steel crank linked to custom Reher-Morrison H-beam connecting rods wearing Ross forged aluminum 14.5:1 pistons while a custom ground cam makes plenty of bump. Up top a set of Reher-Morrison Pro Mod Billet cylinder heads make massive power when capped with a Pro-Filer Performance Sniper Ram tunnel ram topped with a pair of custom Holley 1050 Dominator carbs from Pro Systems. It all sparks to life through an MSD Bro Billet ignition with spent gases roaring through custom CDRC headers to a 4-1/2-inch exhaust. Power moves though a Coan Racing Ultimate Powerglide with a 5,000-rpm converter to a custom driveshaft. The combination dynoed at 1,100 hp at 6,200 rpm.

Bringing the tortured body back to life was no small task so Mark enlisted Precision Auto Body of Oaklawn to handle the job. The team stripped the body and followed by making all necessary repairs to bring it back to perfection while also setting all the gaps and prepping it for paint. A custom-blended Axalta vibrant red was selected and Paul Iquinta loaded his spray gun and laid down the vibe bringing it all to life. Mike Montoya of Montoya Customs in Kendallville, Indiana, then wrapped it up in custom ghost flames and gold leaf. Inside it's all business, starting with a custom chromoly rollcage from John Byron Race Cars of Chicago and Auto Meter gauges monitoring all the vitals while a Grant steering wheel carves the course through a Flaming River column and shifts fly though a Hurst stick. The interior wears custom black and silver leather by Addison Auto Interiors of Addison who also covered the Kirkey Racing seats and laid down the black carpet. Mark campaigns the car regularly with 8.49 e.t.'s in the quarter-mile at 158 mph while also doing double-duty on the street, and to us that's the ultimate Street Shaker.