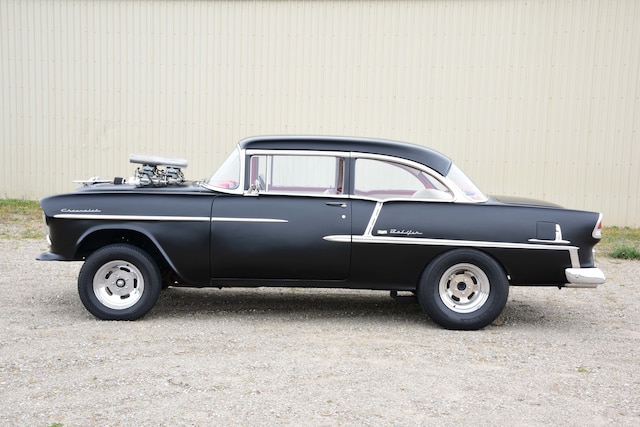 If you're involved in the world of hot rodding there's usually a trail of experiences that led you down that path. For a young Trevor Lines, of Milverton, Ontario, Canada, it all started with a derelict VW Beetle that was parked in the family's backyard. It's where both mechanical and fantasy entertainment gave him plenty of opportunity to analyze its internal structure, while also transporting him to the dreams of racing it on the streets and track.

Fortunately, there was plenty of family automotive influence as well thanks to his uncles Glen and Terry who wheeled a pair of hop-ups with their 1930 Ford roadster and 1972 Plymouth Challenger, respectively. The pair gave him plenty of thrill rides as well as led him deeper into the mechanics of each one. By the time he was 15, Trevor not only bought his first car, a 1980 Plymouth Roadrunner, he also secured a job at the local Chrysler dealership where his Uncle Glen worked. While honing his skills as a mechanic he owned plenty of other rides, including a 1970 Dodge pickup with a nasty 340ci mill linked to a four-speed, which introduced him to drag racing at Grand Bend Motorplex. A 1965 Plymouth Valiant Signet with a hot V-8, and even an aggressive 1928 Ford sedan soon followed. There was just something about the dragstrip, however, that mesmerized him with all the supercharged Gassers he saw on a regular basis.

After 19 years with Chrysler he eventually moved on to open his own shop, known as The Garage, while also starting a family. While the Model A was a blast to drive with his wife, Becky, having two young sons, Hendrix and Marshall, left him wanting to share the rodding experience with them as a family. Reaching back to the past with his Gasser fascination, he began to look for a 1955 Chevy that would allow him to build the car of his dreams with plenty of room for everyone. It wasn't long till he located a moderately clean 1955 whose owner was looking for a hot rod. A deal was made and the cars swapped owners, giving Trevor a fresh start.

With the car being a basic driver it was time to rework it from the bottom up. Since the original frame was rock solid, Trevor focused on the suspension, starting out back with a Chevy 10-bolt rear packed with 3.42:1 gears suspended in place by a set of new factory leaf springs combined with Monroe tube shocks. To get a cool Gasser-style stance he added a pair of Speedway Motors tubular upper control arms matched to 1964 Chevy Impala big-block coil springs, 3-inch upper ball joint extensions, and Monroe tube shocks. For plenty of stopping power a Corvette-style dual master pushes fluid through steel lines to 9-inch rear drums and 10-inch front disc brakes. It's all connected to the street with a set of vintage Superior slotted 15-inch wheels wearing Firestone rubber.

If you're building a Gasser you better have the right mill between the 'rails. Trevor flexed his muscles and built a 355ci Chevy small-block packed with just the right bits. He massaged the block and filled it with a stock crank linked to matching rods wearing 9.5:1 forged pistons while a mild GM cam sets the beat and a pair of warmed-over camel hump heads make plenty of power. Up top there are loads of magic, starting with a custom 5-inch supercharger spacer milled by Chris Holke sitting on a Weiand intake topped with a matching 6-71 blower fed by a pair of Holley 650-cfm carbs. A classic four-holestyled air cleaner seals the deal. It sparks to life through an MSD ignition and dumps spent gases via Hedman long-tube headers to a 2-1/2-inch steel exhaust with MagnaFlow mufflers. A GM TH400 trans moves the goods rearward through a custom driveshaft to spin the tires.