This 1955 Chevy Convertible is the Ultimate PCH Cruiser 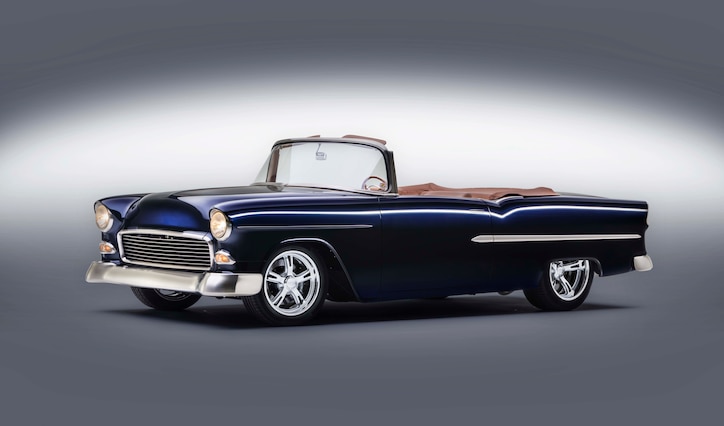 Picture this: you're sitting at Ruby's Shake Shack in Newport Beach, California on a typical sunny Sunday afternoon enjoying some fries and a delicious shake. Behind you waves are crashing on the beach and kids are playing in the sand, but that's not where you're looking because you're staring dreamily at Pacific Coast Highway (PCH) watching all the cars ritzy Newport Beach has to offer. There goes a Porsche, a few Teslas, and another Porsche. Ooh a Ferrari. Was that a Rolls Royce? Yep. Bentley, Maserati, Lambo—check, check, check. You're not even noticing the countless BMWs and Mercedes at this point. Remember, this is a typical sunny Sunday afternoon.

So if you live in coastal Southern California and you've got a few bucks to spend on a weekend cruiser, what ever could you do to stand out? The only logical answer is to be completely illogical.

Enter Andrew Gabriel. He wasn't interested in driving down to the local Bentley dealership and dropping six-figures to simply blend into the herd. No, he had another idea, one that pulled its inspiration from experiences in his youth years ago. As Gabriel tells us, "My childhood friend's neighbor had a yellow '57 [Bel Air] that I use to stare at whenever the garage was open. When we were shooting hoops one day after class his neighbor fired it up and drove off and I remember telling my friend, 'I'm doing to get one of those one day. '"

That first obsession with Tri-Five Chevys stuck with him all these years until his career afforded him the opportunity to make good on that goal. Although he grew up watching his grandfather toil away on Ford Woodies, Andrew wasn't interested in trying his hand at building or restoring a car himself. He much preferred the idea of having an old car that was built by someone with some real experience. Andrew's journey toward a '55 Chevy started with him looking to purchase a car that had already received a full restomod treatment. But the longer he looked, the more he realized that he would never find that perfect Tri-Five for cruising PCH. Lucky for Andrew though, he was introduced to Craig Morrison of Art Morrison Enterprises who, in turn, introduced him to Scott Bonowski of Hot Rods and Hobbies in Signal Hill, California. Trusting his referrals, Andrew jumped in head first and had Scott begin the search for a usable '55 Chevy convertible.

"I was having a beer with a couple friends," Andrew recalled, "when Scott called me and said, 'This is your car!'" The car he was referring to was a 1955 Bel Air convertible in Kansas. Andrew, eager to get the build going, didn't hesitate to have the car purchased and brought out to Southern California.

With Craig Morrison in the conversation and aspirations of modern ride and handling characteristics, a full chassis from Art Morrison was the obvious starting point for Andrew's Chevy. The chassis showed up to Hot Rods and Hobbies complete with an independent font suspension (IFS) and a four-link in the rear with JRi coilovers at all four corners. A Ford 9-inch from Strange Engineering is the centerpiece for the four-link and houses 31 spline axels with a limited-slip differential and 3:73 gears. The chassis also came with some serious brakes. In the front live six-piston Wilwood disk brakes with 13-inch rotors while the rear gets slightly smaller 12-inch rotors and four-piston calipers. Braking assistance is lent by an electric booster from ABS Power Brakes.

With the boxes checked for modern performance and reliability, it was time for Scott and his crew at Hot Rods and Hobbies to focus on making the '55 stand out visually. Andrew didn't want to blend into the background while cruising around in Newport Beach but he also didn't want to draw cheap attention by painting the car in some ridiculously flashy hue. "Picking the paint color was pretty stressful," Andrew told us, but in the end the color was one of his overall favorite parts of the Chevy. After much deliberation, they settled on a custom mix of midnight blue which Scott sprayed on the car using Axalta paint. "Badass but subtle and understated," was the goal according to Andrew and if you've paid much attention to the pictures, that goal was certainly accomplished.

While the paint itself is quite enchanting, it's the little details around the car that make all the difference. They cleaned up the car big time by removing all the emblems, the hood ornament, and the gas filler door (which was then moved behind the left taillight a-la-1956 Chevy). The windshield frame was also chopped 1-inch and flattened while both front and rear bumpers were shaved, narrowed, and pulled in tighter to the body. All the once-chrome trim was then sent down the street to Artistic Silver Plating Inc. in Signal Hill, California and nickel-plated to match the subdued look Andrew wanted. Furthermore, custom flush door handles were installed along with a new custom grill. The final touch for Andrew's '55 came in the form of Schott Mod 5 wheels wrapped in Continental Sport Contact tires. In the front, 245/45R17 tires were mounted on 17X8-inch wheels while out back, 275/45R18 tires went on 18X10-inch wheels.

In a convertible that would see countless hours of top-down coastal cruising, the look of the interior was almost as important as the exterior. Mark Lopez of Elegance Auto Interiors in Upland, California was tasked with creating a refined and luxurious feel inside the Bel Air. Ferrari tan leather was chosen to contrast the midnight blue paint and covers a majority of the interior from the front and rear seats to the custom dash and door panels. While the seats and dash get a little Ferrari, the carpet gets some Mercedes Benz—Saddle-colored Mercedes Velour carpeting to be exact. Speedhut gauges are located just above the ididit tilt steering column and 15-inch stock-style steering wheel giving Andrew a simple and stylish view from the driver's seat. In the custom center console is a Pioneer head unit installed by Carlos Rodriguez at Art of Sound in Upland, California which controls a full Rockford Fosgate sound system. Also in the center console live the controls for the Vintage Air A/C along with a Lokar shifter.

When all was said and done, "The most challenging part has been testing my patience with the time it took to build," said Andrew. It's been three years now since he purchased the '55 and his only gripe with the whole process is that he didn't do it sooner. Regardless of timeframe, he finally has that badass but subtle car that he can pull out of the garage and rip around town whenever he wants. Now on any given sunny Sunday afternoon in Newport Beach, you're still sure to see plenty of Ferraris and Bentlys, but if you're lucky, you'll also see one stunner of a convertible 1955 Chevy Bel Air cruise by too.