This “Crashed” 1972 Chevelle Went from Crusher-Bound to Track Crusher 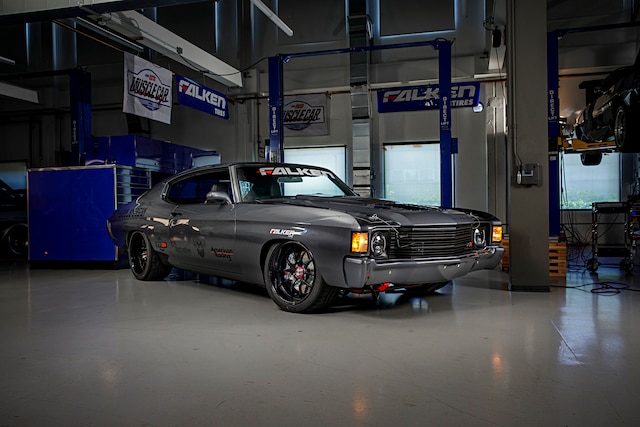 Once every year, Super Chevy hosts a put-up-or-shut-up style suspension challenge and invites suspension manufacturers to show the world what they've got. It's an all-inclusive shootout that tests suspensions of all styles, cost tiers, and ideologies and puts them to work on the road course, slalom, and 100-yard dash. Last year's event, the 2018 Super Chevy Muscle Car Challenge presented by Falken Tires took place in sunny Fontana, California, and had great turnout of awesome manufacturers ready to go to toe-to-toe, tire-to-pavement, and pedal-to-the-metal to prove they are just as hard core as their customers.

Some cars are purpose-built to handle while others pull double duty on both the street and track, and, in some cases, the car has one heckuva story. Enter Crash, the lucky Chevelle that got a second chance at the road.

The Car
James White, a Los Angeles police officer, bought the stock-ish 1972 Chevelle with a 350ci engine and Turbo 350 transmission five years ago. Parts were acquired as money allowed and the car began to trend upward, with improvements flowing through every major system. It became a daily driver and, in a little over a year, the car had racked up 9,500 miles on the new combination.

Then the worst happened. The car took a hit in a traffic collision that, in the eyes of the insurance company, resulted in the Chevelle being written off as a total loss. Fortunately, hot rodders are infamously bad at counting beans. For the sum of $500, the crunched Chevelle was bought back from the insurance company and traded to friend and fellow lawman Frank Herrera in exchange for a paintjob on White's other project. A sheriff's deputy who wears two hats, Herrera also owns One Off Rides in Norco, California, where the Chevelle was lovingly received and work commenced immediately on its second life.

Aldan American owner Garrett Harmola caught wind of the rehabilitation project and invited Herrera to be his entry into the 2018 Muscle Car Challenge, then only five months away. White, Herrera, and Edwin Escobar of One Off Rides spared no time in turning the car, now officially named Crash, into a track-ready machine.

"This car was rebuilt in five months after the car accident that totaled it," said White. "We pulled an all-nighter to complete the car for the [Muscle Car Challenge]. We did not even have time to get an alignment or align the hood properly because we were out of time."

It was a mad thrash and herculean effort to be sure. Let's take a look at what the team built.

The Go and the Grip
Under the hood, the Chevelle remained largely unchanged from its former iteration. Much of the work centered around reviving the mangled front end of the car, but there was still plenty of time to hit on all the key, track-specific essentials. Chassis braces from SC&C (front) and UMI (rear) were retained, as were the SPC upper arms and Speedtech lowers. Factory spindles equipped with Master Power brakes and Howe Racing tall ball joints provided increased stopping power and improved geometry.

"We went with our fully bolt-on Road Comp Series Coilover Conversion kit for the 1968-'72 GM A-body chassis," said Aldan American president Garrett Harmola. "This kit includes front and rear single-adjustable Phantom Series coilovers and Aldan springs along with all of the brackets and hardware needed to convert this factory suspension to adjustable coilovers."

Under the hood, the stock 6.0L LS—swapped in by White before the crash—was treated to a set of 1 3/4-inch Speed Engineering headers and a full dual exhaust system through Black Widow mufflers. A Holley Performance LS-swap oil pan helped it nestle into the Chevelle's engine bay. Outside of those simple parts, the engine is stone-cold stock. Power is estimated at around 425 hp, which is likely close to the mark for an uncorked LS. The 4L70E transmission is also a salvaged stock piece that is untouched, including the factory converter. The Chevelle's rearend was upgraded to a 12-bolt and packed with new 3.73 gears and an Auburn limited-slip differential.

"The car was built on a budget to today's standards and with no fabrication," said White. "We used a stock LS2 Craigslist engine with 100K miles and mixed and matched parts that can all be done in someone's garage."

Building a car on a modest budget is huge part of the core hot rodding mantra and the team's mix of used factory parts, bolt-on suspension components, and some seriously capable Falken Azenis RT615K+ rubber is proof positive that a lot of fun doesn't take a lot of money. That recipe alone is gold, but folding it into a Chevelle build many would have sent to the crusher makes it platinum.