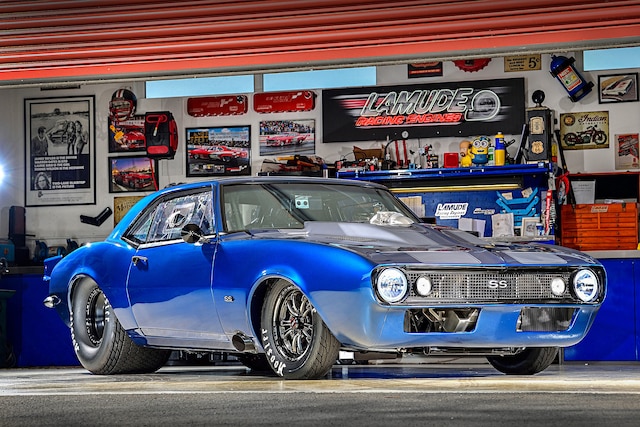 It doesn't matter where you live. Hot cars will always be there; most often in places you'd have a hard time imagining. Certainly, the hot rod culture began here in the prized former colony of the British Empire. There was revolution, you'll remember, a lot of the war waged by the locals to be shed of taxation without representation, repression, and myriad other indignities.

Well, all that's been mostly forgotten now, but American muscle cars still blare and bleat and have not been forgotten. Some astute UK youngsters have lusted after Detroit iron since they were old enough to get behind the wheel, any wheel. Marc Lamude is one of them. He didn't want a stocker, either. He craved something modified. His car disease began with a '73 Super Duty Trans Am he saw sitting on someone's drive when he was 15. He'd had his first Yank—a '75 Gran Prix—soon thereafter but hankered for a Pro Street Camaro for a long time, all wiggly, like his butt was on a strip of thumb tacks.

As F-bodies are not native to the British Isles, the Camaro was discovered in the New World. According to Marc it was well-known, owned by Taylor Engines way over there in Diamond Bar, California, an ex-Super Stock racer that Marc cadged as a humble roller in 2014 or so. The caveat was that it would be driven every day that London streets were dry. So, what's the big deal you think? But after you look, you see it is a very big deal.

Marc based the build on several unorthodox cues, the most salient being a 400-cubic-inch aluminum small-block that flaunts SB2.2 race heads because they flow big numbers and were just the ticket to service a pair of Precision Engineering turbochargers. The object was to drive a mild engine during all phases of service, not some high-idle, high-compression, gnashing camshaft engine that acted like a grenade ready to fragment.

Modern electronics made the whole thing possible. Modern may be a euphemism for expensive, and the MoTeC EFI, engine, and ignition control are way up there at the top of the list. The MoTeC system is Shane Tecklenburg's turf. He lives in Huntington Beach, California, and sometimes makes his living dispensing programming via email; whenever possible he does it on site. New Pro Street cars no longer labor beneath a bulging bonnet. The modest cowl hood on Marc's Camaro is there mostly in the interest of alleviating obscene engine bay temperature common to a turbocharged engine; dual radiator cores are indispensable.

Despite the lack of cues, the Camaro still is not much of a sleeper. You'd have to be asleep not to notice the exhaust collectors jutting through the front fenders all race car-like, the minimal-contact skinnies and those two-foot-wide hides slinging on bead-locks broadcast intention without making a sound. On the other hand, Marc pilots his hard-core Camaro on highways and city streets with nary a muffler! Running "turbo quiet" was the goal. Torque is absorbed by a Reid-cased Turbo 400 transmission built by Andy Frost at Penn Autos. Frost included a Neal Chance converter set with a 4,500-stall speed.

It was obvious that the bed for this latent commotion be on par with the drivetrain. The 108-inch wheelbase chassis was erected with tube and box from Webster Race Engineering (hard by Santa Pod Raceway). A fabricated 9-inch is stocked with a spool twisting Moser 40-spline axleshafts. The mess is under auspice of a four-link rear suspension, Strange Engineering double-adjustable coilovers, and drag-style four-piston billet disc brakes.

All of this lurks beneath a steel shell appointed with doors, decklid, hood, and front clip manufactured by Lamude's in-house fiberglass shop. The Camaro also got a fabricated wing and a composite rear "bumper." Lamude didn't know what the paint was; only that it was a made-up color. Jeff Meads did the spraying; later, Neil Melliard did the graphics.

We've got a shot of Marc with his hands on the MOMO, wearing his So-Cal sweat. He's all nestled in that JAZ seat, a line of toggles above his head, parachute release handle to the left (don't know if there's really a 'chute back there or not), ageless Rat Fink air freshener, too. But mostly it's about the easy smile on his face. Being here like this always evokes memory: the first time he fired the engine up and went about vulcanizing London's ancient ground. And that's something you just cannot buy.

Through it all, Marc says the most vexing thing about the two-year-long project was "getting all the induction tubing to fit and to look as symmetrical as possible." Lamude is thankful especially to Andy Frost (transmission), Ross Buckingham (Rude Engineering), Shane Tecklenburg (ST Consulting, MoTeC tuner), Terry Dolphin (Dolphin Motorsports), and Neil Melliard (Melliard Graphics).

Now, having done the near-impossible task of shaking a rat out of a weasel, Marc Lamude can sleep a leaden sleep and dream of absolutely nothing. CHP