Going 300 mph is Not as Easy as One Might Think 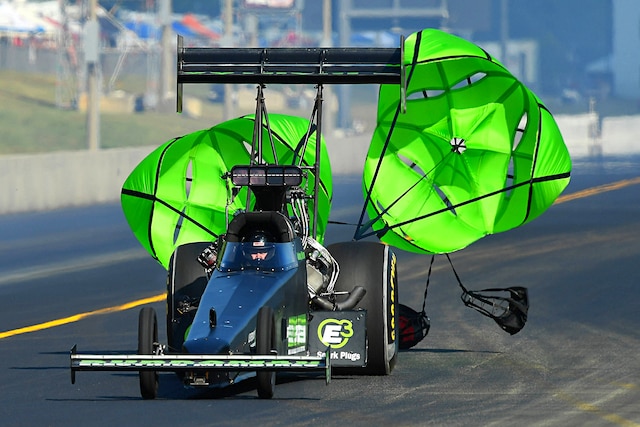 The world of drag racing has been obsessed with the number 300 since the early 1990s. It was during that time frame when Top Fuel dragsters began to flirt with 300-mph quarter-mile runs, and it captured the imagination and attention of gearheads the world over. It was 1992 when the barrier was officially broken by Kenny Bernstein, and a couple years later it was commonplace to have a load of cars at any national event running over 300 mph on a given Friday, Saturday, or Sunday. The number went from being an anticipation of fans to an expectation of fans that follow nitro-powered drag racing these days. Somewhere along the way the perception of 300-mph runs changed and it all just seemed to get easier, right? Guess what guys and germs?

It's still a really damned hard thing to do.

When Don Garlits was putting a wrap on his improbably prolific and incredible career he had one last goal. Know what it was? To go 300 mph. And this was about 10 years after the barrier had been broken. Currently, loads of talented young drag racers are working their way up the ranks with the idea of holding a 300-mph timeslip in their hand right at the forefront of their brain. Know why?

It's still a really damned hard thing to do.

The point of this is not to talk about going 300 mph, but rather it's to take a second and think about the things that you want to accomplish, the things that you want to do. Many people have climbed Mount Everest, but that snow-covered crag is still as steep and as tall as it was when the first guys scaled it. You may be working toward your first 13-, 12-, 11-, or 10-second pass at the strip, maybe working for a horsepower goal you have never achieved in an engine build, maybe simply looking to do something in your life or career to emulate a person you have admired or continue to. That's your 300 and it's as big to you as it is to anyone strapped into a Top Fuel dragster or nitro Funny Car.

Audrey Worm is a part-time NHRA Top Fuel racer. She's the type of person that salty old people claim no longer exists in the world of drag racing. A woman with an all-volunteer crew, with parts that are the best they can afford to have, and with the budget that some professional teams have for French fries on a given weekend. She has one round win to her credit, and when they won, they had help from every team in the pits to get their car back for Round Two, where they lost. Coming into the 2019 Virginia NHRA Nationals the car had never made it into the 3-second zone on the 1,000-foot course Top Fuel dragsters run on at NHRA national events. An improving program had brought her to a car that made five runs in a row in the 4.00 range.

Then it went 3.96. The crew, the crowd, and anyone that had even a fleeting amount of soul in their body went nuts. It is joy in its purest form. It is seeing others succeed after struggle, it is humanity, and those crew guys were feeling the same, literally the same emotions you feel when accomplishing your own goals, no matter what they are.

It's too easy to be a negative jerk in the world we live in, isn't it? Too easy to lean back in your chair and fire off some words into the internet vapors that are designed to either project your own anger or rile that of someone else. People that do that lack a 300. People that do that have no direction in which to channel that energy and those feelings.

Have a 300. It may be getting the lawn mower running. It may be trudging a couple of miles on a treadmill to get your fitness squared away. It may be turning that forlorn car that's become a shelf in your garage into a runner again. Heck, it might be traveling to an event like LS Fest or Drag Week. Just have something because when you have something, as big or as small as it may be, you'll have a direction to march in and something to chase. You'll also have a steppingstone to the next goal you want to reach.

About the Author: Brian Lohnes is the Lead Announcer for NHRA on Fox, host of MotorTrend's Put Up or Shut Up, and co-owner of Bangshift.com.

The parachutes are blossomed to slow Audrey Worm after a career best run of 3.96 seconds in her Top Fuel dragster at the 2019 Virginia NHRA Nationals. A triumphant moment for an all-volunteer, low-buck team. As of press time, Audrey is knocking on the 300-mph door with a fastest run of 297 mph. Photo: Ron Lewis