This dazzling '67 Chevelle SS was rescued and perfected!

Found in a field, this stunning '67 Chevelle SS was given new life and a new appearance. 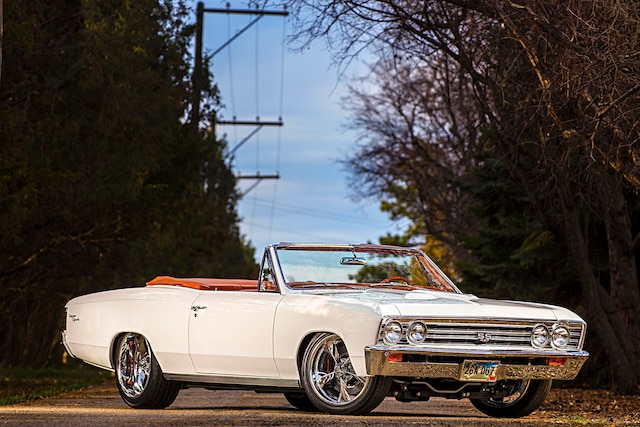 If you've ever taken a trip through the backroads of American's rural heartland, chances are you've seen a car—or several—sitting in a field, surrounded by unmown grass and trees. Often, these collections of steel, fabric, and glass are wounded by the elements and appear forlorn, a memory of some random owner's days gone by.

In the interesting case of Derek and Eileen Eisenbeisz's 1967 Chevelle SS, the car they noticed parked in a South Dakota field several years ago was partially covered by a tarpaulin, with its heritage unknown at the time. All that could be seen was the nose of the car, with the tarp covering its nonexistent convertible top. Derek found a way to locate its owner and offered to purchase the car if it ever became available. Approximately three years later that opportunity presented itself. Soon thereafter, the chassis—sans the previously blown-up engine and transmission—found its way into a storage shed on the Eisenbeisz's farm.

Cue the small-town coincidences so prevalent in American life. "As it turns out, the previous owner of the car is from my hometown and was my high-school classmate," remembers Eileen. "I recall the car, but I don't think I ever got a ride in it then."

When the car was found, its condition was rough but restorable and a VIN search disclosed that it was a "true 138" car, a factory-built '67 Chevelle SS, which was inspiring information as the Eisenbeisz's had big plans for the restoration. Once the car was purchased, it sat in their shed for three years before they were ready to undertake its rebirth.

The decision was made to deliver it to Paul Atkins Hot Rods & Interiors. Although there are approximately 1,300 miles between the Eisenbeisz's Bowdle, South Dakota, home and Atkins' shop in Hanceville, Alabama, the Eisenbeiszs were clear with their choice, as the Atkins team had restored another vehicle for them previously and they were very satisfied with the work performed.

A phone call was placed to Atkins, a plan was set into place with the expectations for the completed project, and the car was delivered for the team to apply its magic touch to the Chevelle's rough flanks.

Since this car was originally a big-block car, it was fitting to take a look into the Chevrolet Performance catalog for a brand-new ZZ427 crate engine to place between its framerails. The ZZ427 is a modern interpretation of the original big-block installed in '60s muscle cars; an iron four-bolt main block and aluminum cylinder heads combine with a forged rotating assembly and hydraulic roller camshaft to produce 480 horsepower and 490 lb-ft of stump-pulling torque, perfect to motivate the heft of the Chevelle's drop-top chassis.

They immediately removed the OE valve covers for a set of super-clean aluminum covers from Billet Specialties, and Atkins manufactured a custom air cleaner housing. They also installed a Vintage Air Gen IV Magnum HVAC system to help the Eisenbeiszs stay cool on the hot summer days. Lastly, a chrome serpentine belt-drive system was installed to complete the engine's crisp, clean appearance. A swap to fuel injection is possibly the only change the Eisenbeiszs would consider to the car as it's currently configured.

A TREMEC five-speed transmission leads through a FastShafts driveshaft into a GM 12-bolt rearend filled with 3.73:1 gears and a limited-slip differential. So not only does the car benefit from the modernized engine combination—although it does wear a carburetor as delivered, to retain some of the car's heritage—it gets a solid, contemporary, easy-shifting transmission to turn the torque and horsepower into speed.

Paul Atkins Hot Rods designed and installed the exhaust system, which uses coated pieces from Performance Coatings and relies on 2 1/2-inch Borla mufflers to perfect the big-block's tone as it rolls down the road.

As is the case with so many of today's restomods, an all-new chassis underpins the body shell—50-plus-year-old factory steel frames are often in dire need of replacement, and it's often far more cost-effective to replace it with an all-new chassis. There are other benefits as well, chief among them ride quality and ultimate performance capability. This super-sano Chevelle rides atop one of Roadster Shop's complete chassis, with JRi coil-overs in the front and rear and a complete set of Baer Pro 14 six-piston calipers providing the stopping power. The 12-bolt has been narrowed and makes use of Roadster Shop's four-link suspension arrangement in the rear, with drop spindles and tubular A-arms used up front to help set the car's stance and appearance.

It rolls on polished US Mags Standard wheels, measuring 19x8 up front and 20x10 out back. Hankook Ventus V12 evo2 tires are spec'd at 225/45R19 and 275/40R20 to help maximize the car's footprint and provide solid stability and performance, with comfortable ride characteristics.

Inside the car, the Paul Atkins touch shines with the original '67 Chevelle seats covered in Paul Atkins Rust leather. The seats use custom-manufactured cushions, while the rear set was handbuilt for the perfect appearance. The Rust treatment continues through the door and side panels, custom-built console, and even the leather shift boot and steering wheel, which was lifted from a 1969 Camaro Z/28. A set of Dakota Digital HDX gauges offers an outstanding appearance. Lastly, the convertible top is finished in a Rust hue, which gives the entire car a clean, matching presentation that flows nicely throughout.

An Alpine head unit and amplifier are nicely tucked away from view, with Pioneer 6.5-inch front speakers and 6x9-inch rear speakers matched with a Polk Audio 8-inch subwoofer for just the right amount of crisp, clear sound with the top down. Paul Atkins Interiors also installed this gear, with a goal of one-stop shopping for the Eisenbeisz's project.

The exterior is finished in R-M Arctic White pigment from BASF, with all of the bodywork completed in-house at Atkins. In the interest of retaining the classic lines of the Chevelle, the stock front and rear bumpers are still in place, along with the original GM grille.

From start to finish, the entire project took approximately one year to complete, and at its first show, Kool Deadwood Nights, took home a Top Ten Contender award, scored First Place in its class, and won the Best GM Overall title. Not a bad showing.

"We want to travel this summer with this awesome '67 Chevy Chevelle SS convertible, and let others enjoy viewing it, too," Eileen says. What a perfect plan for a perfect car.