Some cars receive nicknames, others earn them 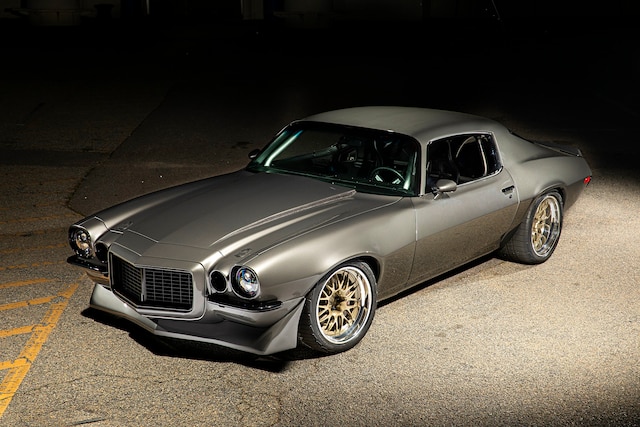 Most of us have nicknames for our cars. It could be a familiar pet name like Black Stallion or White Lightning or it could be more meaningful like The Crusher Camaro, a car literally saved from the crusher. There are also those that earn their nicknames through years of suffering. Take, for instance, David Schardt's '70 Camaro, a car we were supposed to feature two years ago: the FN Camaro.

David's wife, Sherri, coined the nickname after months of setbacks. "She'd call it that about every time we wrote another check," said David.

Restomods were beginning to push the limits of performance back in 2008, giving birth the Pro Touring movement. For example, as speeds and tire sizes increased, wheels began to break. As president of Forgeline Wheels, participants who ran Forgeline wheels, including Super Chevy Editor Steven Rupp, encouraged David to attend Pro Touring autocross events. This made sense since Pro Touring cars were evolving into true track-capable cars, and Forgeline's high-performance wheels were a natural fit.

"We fell in love with Pro Touring and I decided to build a car so that when we attended an event we could actually participate," said David. At the time, David's favorite car was his '15 Corvette Z06 but would have to sell it to fund this new project. His compromise was to carry over as many elements from the Vette to a Pro Touring build.

The project started with a restored and driveable second-gen Camaro. Their intention was to perform an engine swap and suspension upgrade and quickly have it roadworthy. The team at Smitty's Custom Automotive of Tiffin, Ohio, immediately tore into the car.

After removing the engine, the team discovered chunks of fiberglass on the firewall. Further investigation uncovered holes throughout the roof and quarter-panels, most likely due to a hastily installed vinyl roof covering. "The car was beautiful and the floorboards were perfect, but at this point there was nothing we could do but strip the car down to nothing," said David. They replaced the roof and quarter-panels, but "it all went to hell from there."

The project then snowballed. The team figured that if the car was getting torn down, they might as well do it right. "Some great companies got involved and we decided to make the car nicer than we intended," said David.

When we finally saw the car after three years of waiting, it only had 30 miles on the clock. We expected David to be anxious around the Camaro, but instead he seemed satisfied with the outcome. His anxiety is only about getting started on future road trips. First up is FM3's Cars and Cones, where the Camaro will see over 1,000 miles. He is currently refraining from heavy competition as he's aiming for some car show awards. David deadpanned, "After Goodguys Columbus, all bets are off and I'll do whatever I want with it."

Engine
The godfather of Pro Touring himself, Mark Stielow, gave some guidance on the LT4 swap. The Camaro was one of the first to receive an LT4 swap, but due to setbacks wasn't on the road until now, taking away that first-to-do-it brag. The complete Scoggin-Dickey LT4 received a Lingenfelter Performance tune and a dry-sump oiling system. The Bowler Performance Magnum six-speed transmission features the same gear ratios as a ZR1 Corvette. They added a trans cooler, Finch shifter, and Centerforce DYAD dual-disc clutch. The team constructed custom engine mounts and a crossmember, utilizing Ultimate Headers' LT4-swap long-tube headers featuring 1 7/8-inch primaries. The direct-injected powerplant makes 750 hp to the wheels.

Out back, the framerails are replaced with DSE's QUADRALink kit, including a 9-inch solid rear axle with a Moser limited-slip centersection. "It modernizes the vehicle and makes it a lot better on the street," said David. The rear is finished with mini-tubs to fit the new 12-inch-wide wheels.

Continuing the theme of modern Z06 parts on the second-gen, David added RideTech Instinct electronically controlled coilovers, which are programed for three different drive modes. David simply pushes a button on the dash to activate Street, Sport, or Track modes.

Interior
Inside, David went to his friends at California Custom Sounds of Dayton, Ohio, for a stereo system, including Apple CarPlay. Then the Camaro was off to Trent's Trick Upholstery of Baltimore, Ohio, for the interior. David gave simple instructions: a hard-core race interior, but luxurious and well suited for long road trips. "He then asked if he could take it from there," said David. "I wasn't allowed to see it until he was done and I'm thrilled with the result."

A RideTech TigerCage rollcage adds chassis stiffness, and with its low-slung door bars it's easy to get in and out of the front seats. Trent started with black-leather Recaro seats, a center console, and custom door panels. He performed the painstaking process of wire-tying ARP fasteners throughout the entire cabin, which David stresses was Trent's idea. To tame the heat and humidity there's a Vintage Air A/C system. A Racepak IQ3 street dash serves double duty for tracking engine vitals and logging lap data.

Exterior
The second-gen's factory front fenders are widened and the rear is mini-tubbed to fit the custom-built, aluminum Forgeline wheels, measuring 18x11 in the front and 18x12 in the rear. They are three-piece wheels with an open-lug design that cuts down on weight. David originally built a set of carbon-fiber wheels but fell in love with this off-the-shelf GX3R design. The tires are BFG Rival 315/30R18 front and 335/30R18 rears. "It still spins the tires like crazy," said David.

The Shark Grey color was the color of David's Corvette Z06, which was only available for the Z06. Ghosted clearcoat accents highlight the carbon-fiber hood along the sides of the cowl.