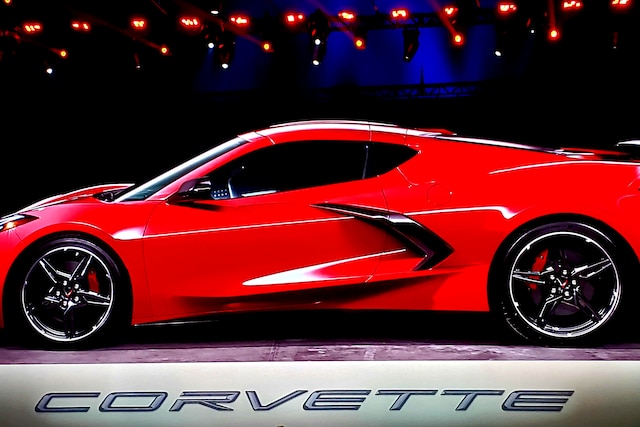 By now, all of us have just about had our fill of this, that and other things regarding the 2020 Corvette. Show me the car ... the one I can go into hock for! Wait, the reported starting price of under $60,000? While not cheap, it's less than what I have spent for Chevy trucks here recently. So maybe my first new Corvette looms on the horizon.

Everything to date is really pre-production conversation, but we must assume the majority of the info is spot-on and the final Corvette that crosses the dealership threshold will be like the ones we have seen. I'm guessing there will be some very subtle changes but I have seen the dealer option list and I must say that it's very impressive. Of course, there goes my Corvette for under $60k but what the heck, it's a new Corvette ... all-powerful, world class and what a statement it makes.

Lucky enough to garner yourself a ticket to the 2020 Corvette reveal? It was held at the former Helicopter Air Station located in Santa Ana, California, now Tustin, and it was spectacular. Well, yours truly was on-hand with my 1968 Corvette, which had only just been on the road for two weeks. (I might point out there were several hundred privately owned Corvettes in attendance, none of which were older than a '95, with mine being the only vintage ride.) Regular contributor Walt Thurn and myself took in all the sights and sounds (of which there were plenty) for the four-hour shindig. Talk about a Hollywood production ... and it was!

We were impressed to say the least and I am guessing all of you out there have seen plenty of photos and videos and have read everything you could lay your hands on. I am also guessing there are precious few who have actually driven the car and I might add driven the car the way you would wish to drive it had no one been looking and the road was clear. There were simulators that we could sit in and squeeze in and out of the real thing when the throng surrounding the three Corvettes (red, blue, and off-white) present would allow.

By now, all of my neighbors—both car and non-car enthusiasts alike—have made sure to chime in with their opinion or opinions on the 2020 Corvette. The truly snooty foreign sports car crowd are sniveling that the design is "so European" and taking from Ferrari and others. Well, it's a mid-engine, two-seat sports car with the singular objective of making people take notice, corner as if on a rail and accelerate as if you no longer care about your retinas.

The 2020 Corvette, regardless of what anyone can say, this irrefutable fact remains ... the price per pound of performance is world class and nothing else can compare. You can always find a faster car and, in the eye of the beholder, a prettier car, but dollar for dollar the new Corvette has the world in its proverbial hands. The option list, while singular this first year as to an engine, does have five different wheels that can be ordered, 12 colors, six different interior combinations, and the list goes on and on. Now, there will be those that will lament the absence of the four-speed option and, in the short run, only a coupe is available. Fear not, the drop-top and the more potent and varied engine powerplants are on their way.

Others will try and snivel about the fit and finish, the quality of the leather or stereo, or the sophistication of the powertrain. The fact remains that all of the aspects of the car that I could see had me in sheer awe. Having had the opportunity to talk to and listen (for me that's going a fur piece) to others with deep knowledge of this car it is one truly amazing performance vehicle. It clearly holds up the legacy that is the name Corvette. And isn't that what Zora would have wanted? Vette