The Illustrated Corvette Designer Series No. 270 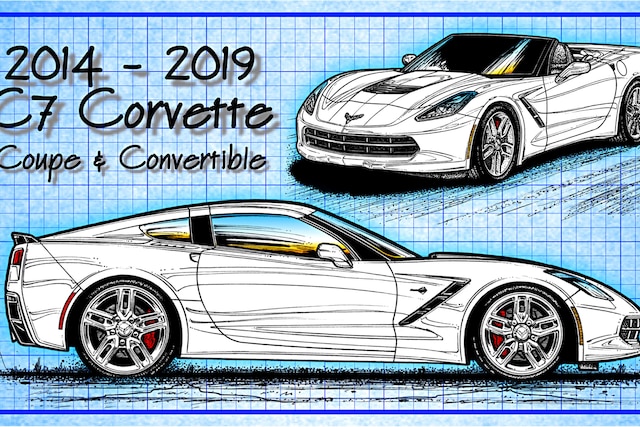 It seems like a few years ago the C7 Stingray made its debut. A draped C7 was center stage with graphics being projected on the covering while a multimedia presentation played on large screens above and behind the draped C7. A bright-red 2014 Corvette then drove out from behind a side curtain and around and in front of the draped C7 and onto a rotating display. It was very cool.

There was some pre-debut anxiety about the C7's taillights, but once word got out how stunning the car was, fans got over it. The C7 was almost the same size as the C6; a 1-inch increase in wheelbase and had more chiseled features. Both the coupe and convertible would be immediately available.

Under the pretty composite fiberglass was an all-new, all-aluminum frame that was stiffer than the C6's aluminum Z06 frame. The suspension layout was essentially the same as the C6, only much more refined. Under the hood was the new 455-horsepower LT1 with direct port injection. With the optional NPP performance exhaust output bumped up to 460.

Ever since the 1974 Gymkhana option that included stiffer front springs and larger front sway bar, the Corvette has been offered with upgraded suspension packages. All of the C7 Z51s were performance models without a badge. The $2,780 package included: performance brakes, slotted rotors, black calipers, special front and rear wheels and tires, upgraded suspension, dry-sump oil system, performance gear ratios, aero package and electronic limited-slip differential with a cooler.

The C6 generation would have been much more successful were it not for The Great Recession that pushed GM into bankruptcy. The C7 was put on hold at first, but a government agent learned that the only GM vehicles that showed a profit were Corvettes and trucks. The C7 was put back on the front burner, but it had to be awesome.

The biggest media complaint about the C6 was the interior and seats. No one complained for the first few years, but by around 2008 every road tester had to pile on. While other sports cars upped their interior game, the Corvette got caught in the GM crunch and could only do limited things. The C7's interior design, finish, color and trim combinations were gorgeous. The basic seats looked great, were comfortable and the optional sport seats were first class. The steering wheel was smaller in diameter—14 inches—and the dash had two 8-inch LED displays. The display in front of the driver had three different presentations. The center screen had the MyLink system to control navigation, phone and various interior functions.

In 2015, the Z06 was released with two big surprises. For the first time, the Z06 was available as a coupe or convertible and available with the seven-speed manual or eight-speed paddle-shift automatic transmission. The manual transmission had rev matching that automatically blipped the throttle to the correct higher rpm when downshifting, so you look like a pro. The Z06's price of $78,995 for the coupe and $83,995 was not inexpensive, but when you factor in the performance enhancements, it is a performance bargain.

The supercharged LT4 engine had 650 horsepower and 650 lb/ft of torque. The widebody, raised carbon-fiber hood, unique side vents and side scoops looked downright mean. The suspension; wheels and tires; and ground effects that included a dedicated front splitter with side spats, side rockers, rear fender drivetrain scoops and tall rear spoiler took the C7 Z06 as close to a track car as ever before. If the regular Z06 wasn't enough, the optional Z07 Performance Package added adjustable front and rear aero parts, Brembo carbon-ceramic brakes and Michelin Pilot Super Sport Club tires that were more like racing meats with a few grooves. When it comes to track performance, one can never get too much suspension.

Chevrolet let the dust settle for 2016 and in 2017 released the Grand Sport. The formula was the same as the C6 GS; base model engine, Z06 widebody, dry-sump oil system, full suspension, wheels and tires and brakes. The side vents are different from those on the Z06 and the wheels are 2013 Cup-style wheels. Priced at $66,445 for the coupe, the Grand Sport cost $10,000 more than the base model 2017 coupe. The Grand Sport convertible cost $70,445. The Grand Sport delivered all of the Z06 suspension and braking ability to make the base 455/460-horsepower car even better; all for $14,000 less than the Z06.

Chevrolet saved the best till last with the 2019 ZR1. Tadge Juechter said that after the Z06 was completed, his engineers told him they'd done all they could do to the C7 with the Z06. A year or so later, they thought of a few more things that became the ZR1. The big news was the 755-horsepower LT5 engine that had a larger supercharger than the Z06 and used port and direct injection. The front fenders, fascia, hood, wheels and aero package are dedicated to the ZR1. If that's not enough, RPO ZTK, the Track Performance Package includes Michelin Pilot Sport Cup 2 tires, special chassis calibration, carbon-fiber front splitter end caps and a high adjustable rear wing. The ZR1 with the standard short rear wing has a top speed of 210 mph. The tall wing, which generates 950 pounds of downforce, is for track purposes. The 2019 ZR1's base price for the coupe is $121,995; the convertible goes for $126,495; making the ZR1 the most expensive Corvette ever offered to date. With options, a ZR1 convertible can cost over $150,000. Speed and power has always been expensive.

The 2019 ZR1s will become valuable for several reasons: one production year only, the very last of the front-engine Corvettes, historically the most powerful and the most expensive Corvette ever. Depending on the driver and track conditions, a 2019 ZR1 can cover the quarter-mile in the mid-10s. Slightly modified ZR1s can easily run in the mid-9s, and then cruise on home with all of its creature comforts intact.

The C7 represents the second-shortest generation in Corvette history, only six years of production. The five-year production run of the C2 was the shortest. But the biggest milestone with the 2019 is the end of the 67-year front-engine era. Coincidentally, at the end of June 2019, Kelly Blue Book named the 2019 Corvette No. 1 of their 10 Best Road Trip Cars of 2019.

Mid-engine C8s will be on the road soon and many have concerns over the usability of the mid-engine layout. Will C8 owners be able to "See the USA in their Chevrolet Corvette"? If they try, they'll have to pack a small bag. And, of course, Corvette fans and customers will be expecting a Z06, Grand Sport and ZR1 variants of the C8, or perhaps a "Zora Special" to salute the man that pushed so long for a mid-engine Corvette. There are many possibilities and exciting things to look forward to. Vette