1975 Corvette Custom … Blast From the Past 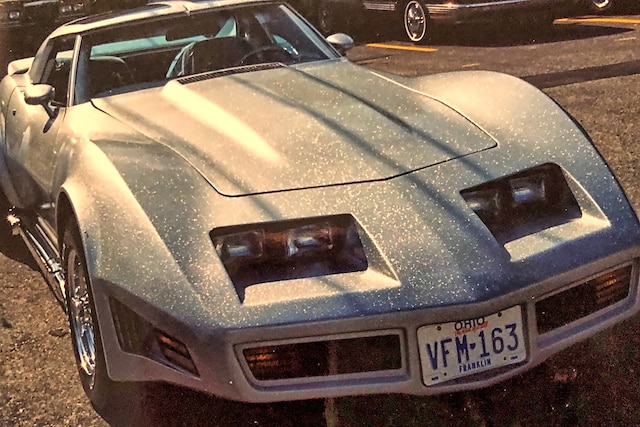 Under a car cover in a garage in Oak Grove, Ohio, is what just may be the world's longest surviving, original owner, continuously modified Corvette in the world, 44 years and counting.

Phil Breckenridge had always wanted a Corvette. Two years after he got married, at 28 years old, he bought his 1975 Corvette brand new off the showroom floor in Columbus, Ohio.

In his hip words, Phil paraphrased the salesman telling him, "Oh man, we can't sell it for anything less [than the $7,800 sticker price] because that's what we paid for it!"

He recalled with glee taking that stock 165-horsepower 350 to the engine shop.

"They rebuilt it, whatever, man, and all that jazz."

The shop even called Phil to come down and watch them dyno the engine, which they had pulled.

He goes, "It might blow your mind!" It sounded like he was going to blow the engine up.

Phil wanted the horsepower in the 350-375 range, so he was really pleased to get a reading of 409 at 5,700 rpm. Later, Hooker headers, side pipes and an aluminum radiator with dual fans upped the horsepower another 15-20.

Custom Corvette owners live in a world apart from the L-crowd, as in L71 this, and L82 that. Stock is cool but modified is what Corvette is all about to legions of owners like Phil Breckenridge.

He sent an email with recent photos and older photos that show a vintage "micro sequin metal flake paint job" that was "about one-quarter the size of regular metal flake."

That old paint was super cool in a vintage way, too bad it is gone. It lasted from 1982 to 2002. Phil got rear-ended on the freeway.

"Man, they don't make that paint anymore," so the shop completely stripped the body and removed the rear bumper to go back with "tinted silver." By the fourth coat the black and white pigmentation was starting to look just the right shade.

"I think he sprayed six coats of paint and a couple coats of clear. It has a Turbo SE nose. Bumpers? I bought the fiberglass ones that are molded into the body. It's got an '82 rear fiberglass back bumper with bubbled taillights. The rear fenders are flared. I bought them off Ecklers in Florida. A guy named Gary Cochran in Grove City, Ohio, did the fiberglass work and all that jazz."

For interior work, Gary recommended a 16-year-old. Phil took a chance. The teenager quoted a price of $1,500. When Phil got the car back a couple months later, he almost "flipped," the job was so good. He could see the diamond design in the seats and not a crooked stitch anywhere. Tickled with the work, Phil tried to pay the kid more money, but he refused.

We wondered if Phil was ever tempted to buy a newer Corvette and maybe get rid of the 1975. He was "getting the urge" for a new 2017 Corvette, gunmetal gray with red interior. Why didn't he upgrade? One reason was his wife had trouble getting into the new one. He also got the hots for a 2019 Grand Sport, but his wife "wants to move to Florida" and said, "don't buy a new Corvette."

Phil drives the 1975 less than six months a year and has "more money in this than I could ever get out." Also, he has his car the way he wants it. Forty-four years has solidified this Corvette as a keeper. Modified Corvettes like Phil's deserve big-time respect as much as any stock Corvette of history. This is a true Rare Find. Vette

After the accident in 2002, Phil had the whole car repainted silver.

Phil hired a 16-year-old to do the interior. He was stunned when the teenager did an incredible job with "not a crooked stitch anywhere."

The rear three-quarter view of the Corvette shows off flared fenders for the 15x10 wheels. Stunning in design is the molded rear bumper, rear quarters and spoiler.