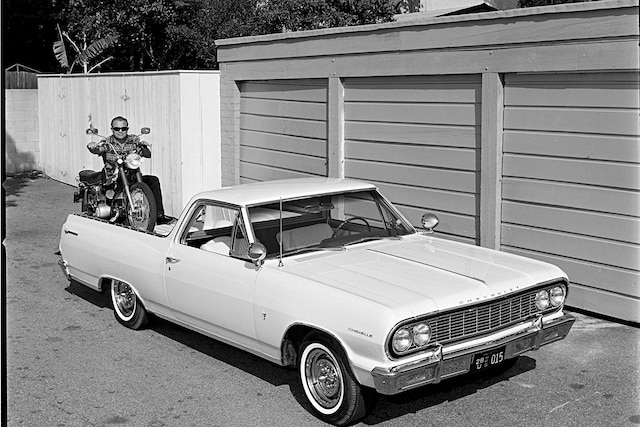 When Chevrolet loaned Hot Rod magazine Publisher Ray Brock a 1964 El Camino for a road test, it wasn't just any Camino. It happened to be the first one outfitted with a 327-inch V-8. "Chevelle series cars were available with a variety of engine options" when the cars were introduced in Sept. 1963, he explained, but at that time the top engine offering was a 220hp 283. "In December, the full line of Corvette 327s was added to the option list, with the exception of the fuel-injected 375hp model." This particular Chevy was fitted with a 365-horse 327 initially, but that "full-race" engine was swapped for a 300hp version "to provide a quieter, smoother engine in a car designed for light-duty hauling," he said.

Unfortunately, hauling—of any kind—wasn't top of mind when the rest of the El Camino's driveline was ordered. The 3.08 rearend "made the El Camino a real charger, but only after the mass was in motion," Brock said. Even with the four-speed Muncie's 2.56 First gear, "starting on level ground took care, and when the El Camino had to be put in motion on a grade, plenty of clutch slipping and engine revving had to be used. The combination is far from ideal, and the 3.90 ratio used behind overdrive transmissions would have been a much better selection."

The tall rear gears also meant downshifting "every time it was necessary to slow down for a corner to keep from lugging the engine below best torque range," Brock said. "The engine would buck and stumble badly if slowed to 1,000 rpm in Fourth, then the throttle opened." On the upside, "At 3,000 rpm in high gear, the El Camino just loafed along at 72 mph. It was great on mileage on the open road."

As this was the very first 327 El Camino, "engineering just had to doll it up a bit to show their top executives," Brock said. Spotlights were added to the cowl, chrome wheels mounted at the corners, and the engine was dressed up with chromed parts to contrast with black crinkle paint covering "the entire engine compartment." The truck was also equipped with Air Lift rear shock absorbers to help level the rear end when carrying a heavy load. Using a "tire valve mounted in the narrow shelf behind the passenger's seat," pressure of up to 90 pounds could be added, depending on the weight in the bed.

Chevrolet also gave Brock "free rein on adding any eye appeal we thought might help." So famed upholsterer Tony Nancy stitched a Naugahyde bed cover in metallic green to match the El Camino's interior accents. He also made a new spare tire cover after the original spare, and its custom cover, were stolen from the truck when Brock parked it at "one of L.A. 's nicer restaurants." A flap on the front of the cover hid the new lock and chain Brock installed to thwart thieves.

Motorcycle riders among the Petersen Publishing staff were happy with the new El Camino, as its 73-inch bed was 2 inches longer than the bed of a 1960 El Camino owned by one staffer, and fully 7 inches longer than a 1958 Ranchero belonging to Editor Bob Greene, an avid motorcyclist who often wrote the "Up on Two Wheels" bike tests for the magazine. Our opening photo shows photographer Eric Rickman pushing his Yamaha into the bed, "happy" that the bike would fit "without angling."

Bikers weren't the only ones pleased with the new El Camino, Brock said. "Every once in a while, we come up with a test car that attracts attention as though it were magnetized. Chevelle's El Camino falls in this category, for it draws raves in service stations and admiring glances when cruising on the highway. In particular, the hot rod and surf board set really scan the car as they drive alongside, but even older folks have been caught giving it a once-over."