Ryan Lowe Missed His First Camaro, Bought Another and Built His Dream Car

When the one gets away, find another 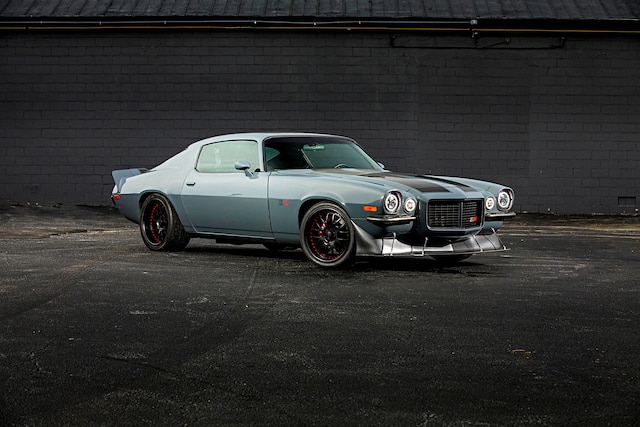 One's emergence into the automotive hobby can happen in many ways. For some, the catalyst was the first turn of an ignition key, freshly minted driver's license in-hand. For others, it was a trip to the racetrack. But the most commonly derived path to the love of cars is familial. Parent to child, or in this case older brother to younger brother, the love of muscle cars and thumpin' V-8s arose.

For Ryan Lowe, the primer was his brother's 1973 Camaro. A project during his childhood, the car had an impact and the seed was firmly planted.

"I grew to love the round taillights and front end on the early second-gens more than any other style/generation," said Lowe. "When I turned 15, my brother sold me the car. I swapped the three-speed transmission for a four speed and had the car painted. A few years later, after joining the Army, I sold it and regretted it ever since."

A story told the world over; the one that got away. But rather than solemnly reminisce of days gone by, Lowe took up the hunt for another '73 Camaro. Surprisingly, he ended up buying one off a Chevy dealer's showroom floor, an unusual feat for a car purchased decades after it rolled off the assembly line.

"Someone had traded it in on a newer Camaro and the dealership had it in the middle of the showroom," said Lowe. "I got a reasonable deal on it, and had it shipped to Texas, where I was stationed at the time."

The car was clean and had a classic Hugger Orange paintjob, but it was too stock appearing for Lowe's taste. And it was far from the daily driver level he had in mind.

"It was straight and looked like a stock car for the most part," said Lowe. "The interior was clean, but plain. Under the hood was a mess. Wires everywhere and nothing looked clean." While in need of work, the car was a great starting point for Lowe's dream Camaro.

Work commenced quickly upon the car's arrival home. The old wheels and factory gauges were yanked for more modern pieces, and an engine swap commenced. The Camaro was an original four-speed car and packed 350 cubic inches in the power department. By modern standards it wasn't exactly quick. Lowe remedied that with a 383 stroker build and highway manners were improved via an American Powertrain-sourced TREMEC TKO-600 five-speed.

Soon, duty called and Lowe, an Army serviceman, was deployed overseas. Rather than let progress on the Camaro come to a halt, he enlisted the help of Anchors Aweigh Paint and Body to give the car the look he'd always wanted. In his absence, the nose was upgraded to an RS style; the cowl hood was ditched in favor of a stock hood; and the rear was treated to a custom-cut, three-piece spoiler.

Lowe thought long and hard on color selection, and after months of debate, settled on an Anvil Gray for the body and Charcoal Gray metallic for the bumpers, stripes, and other small accents. "I really didn't want the Hugger Orange that everyone has," said Lowe. "The new color combo is stunning."

After completion at the body shop, the car was shipped to Randy Langford at The Modern Speed Shop. There, the crew installed the new Chevrolet Performance LS3 engine, RideTech four-link rear suspension, CPP front tubular control arms, Wilwood disc brakes, QA1 front coilovers, and upgraded the manual clutch to a more comfortable hydraulic unit. The exhaust was upgraded with Hedman headers and SpinTech mufflers for the most aggressive exhaust sound possible. The process took about eight months, after which Lowe was finally able to bring the car home.

The car was close, but Lowe had a few touches of his own to add, such as a custom front spoiler from Randy Johnson at D&Z Customs. He also added halo-style LED headlights and taillights, which had to be custom-made.

Stitched By Slick helped with the interior work, reskinning seats from a fourth-gen Pontiac Trans Am. A custom center console was fabricated as were door panels and a smoothed-out dash. Custom Shop AutoMeter gauges in matching gray provide driver information in fashion.

The finishing touch on the car was a set of satin-black, mesh-style Boze wheels measuring 18x8 front and 18x10 rear, with 245/35R18 rubber in the front and 295/30R18 rubber in the rear, providing plenty of traction for autocross excursions and street driving alike.

Now that the car is done, it's time for Lowe to rack up the miles and make up for lost time. His favorite memory of the car is driving it three-plus hours to Myrtle Beach after the LS swap. "The car ran like a new car and got over 20 miles to the gallon," he said. "Each time I drive the car someone stops me to ask about it and look closer at it. She is a real eye-catcher." CHP

Seats: Fourth-gen Trans Am, re-covered by Stitched by Slick