The Retro Nova, a 1972 Street Machine Relives its Glory Days 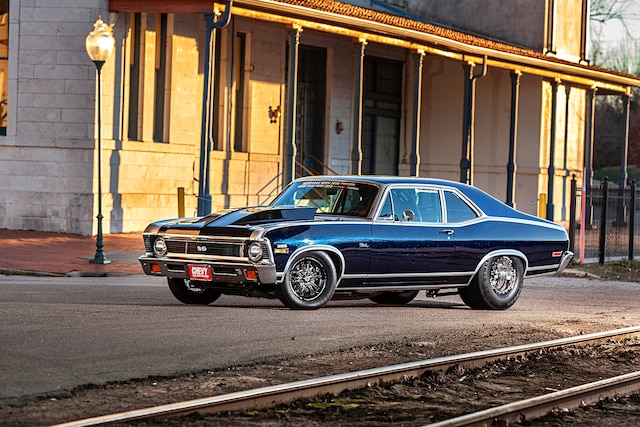 It's August 16, 1977, and a longhaired 16-year-old kid in sunny Southern California brings home his first hot rod: a dark-green 1972 Chevy Nova. Imagine that moment of freedom every heavy-footed teenager dreams about. On his drive home, over the roar of his new small-block, he hears the AM radio newscaster announce, "42-year-old Elvis Presley was announced dead today." A day Dennis Taylor remembers like it was yesterday.

You don't forget your first car. It's a rite of passage, the first taste of freedom. If you're lucky enough, or smart enough like Dennis, you hold on to it. But the Retro Nova took a lifetime of transformations and 32 years of lying dormant under a cover before it became the 7-second, 3,000-some-odd-horsepower car it is today.

He bought it with his $900 in savings, and his dad, being the gentleman that he was, matched him. It even came with a set of Hooker headers and turbo mufflers. You remember the trendsetters, the "outlaws," that subculture of misfits you so desperately wanted to be a part of. You'd watch them get handcuffed in the high school parking lot that was Dennis. He wore the appropriate sunglasses and blasted punks like the Ramones and Sex Pistols from his speakers. He was a well-known kid, especially by the Orange Police Department. "I received so many fix-it tickets they started using me to teach recruits how to write tickets," Dennis said.

At that time he was pushing parts at the local Chevy dealership. Almost immediately the Nova was ripped apart. Not long after, he was shopping at Betz Speed and Color in Orange. He came home with a fresh gallon of candy apple green lacquer mixed by the legend himself, Stan Betz. The car got a fresh coat of paint, wore a set of 50-series Mickey Thompsons, and carried Dennis through his high school days with regular visits to Orange County International Raceway.

Summer 1980. After graduating and jumping ship to Booneville, Arkansas, Dennis takes notice of a feature on Scott Sullivan's 1967 Pro Street Nova. Inspired by the car, torch in hand, Dennis hacks off the back half of his Nova to fab up a new rear floorpan and framerails. He hung a narrowed 12-bolt, which made room for the 15x10 slot dish mags and Mickey Thompson N50-15 rubber.

By his early 20s he was playing around with a 6-71 blower that was repurposed to fit an old Offy 360-degree intake. "When my insurance man caught a glimpse of the car, he refused to reinsure it. I sold the engine and stripped the paint to bare metal. Life happened and the car sat in primer until 2014," Dennis remembers.

His build list is impressive, "I've lost track, but I have to be pushing close to 1,000 builds by now," Dennis said. Through the '80s he worked out of a shop that he built from the ground up. He even sold his SoCal Bug to pay for the concrete and rebar. "I was on a bicycle and borrowing Dad's truck for the first couple of years. I never really came from money, and I never wanted to either," Dennis said. He now owns Hot Rods by Dennis Taylor with his two daughters, Megan and Alex, and his wife, Debbie. He's known for his long list of trophy-winning custom builds and wild street machines, operating with a family that shares his passion. After his daughter Alex (Alex Taylor Racing) turned 16, following in her dad's footsteps, she received her first hot rod: a 1968 Camaro. They turned it from a high school daily driver into an 8-second street car, piloted by Alex.

After watching her track success and Dennis winning Drag Week in 2014, the cover finally came off the Nova after 32 years. He began building the ultimate arrangement. He planned to stuff as much power under the hood as possible. He dyed the original green interior black, refined much of the work he did in his 20s, built a custom rollcage, and fattened up the rearend. He maintained the stock front subframe and control arms, adding QA1 coilovers and a custom Pinto rack-and-pinion conversion. It went PPG Candy Blue over black metallic with silver lace on the roof, and the Retro Nova was born.

Drag Week 2016. The Retro Nova ran with a 525ci twin-turbo big-block that laid down an impressive 2,448 hp and 1,800 lb-ft of torque. He fought transmission difficulties throughout the week, but Dennis managed 8.0 passes at 180 mph. After a complete engine and drivetrain overhaul he made it back to the 2018 season. "I custom-built the complete turbo system, including the headers and the exhaust. I built a new 509ci Dart block with the first set of AFR 18-degree conventional heads. Mike Henson (Henson Racing Engines) blueprinted both the block and the heads in anticipation of 40-plus pounds of boost. I'm expecting close to 3,000 hp this year," Dennis said. He managed a Second-place finish in the highly competitive SS/BB/PA class and ran as fast as 7.86 at 183 mph.

Today, the Retro Nova is prepped and ready for Drag Week 2019. It's reliving its glory days in ultimate form with the culmination of Dennis's experience and spirit as a car builder. "I'm turning 58 years old this year. Most guys my age are still building gassers, but I just want to build 7-second street cars," Dennis said. With his innovative work in the garage, backed by his loving family, he's sure to continue proving his success. CHP