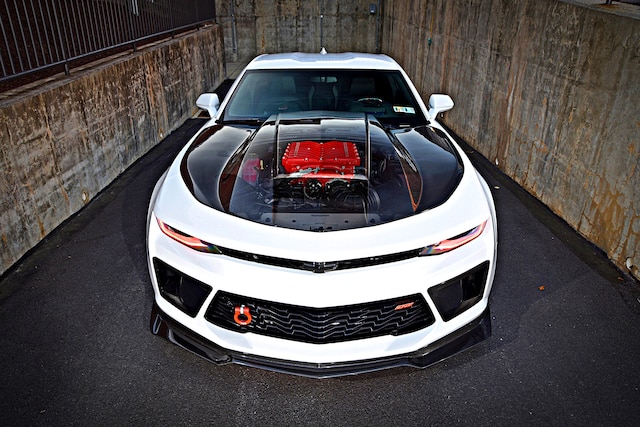 Bryan Everett grew up in a GM household. As a young boy he would have wild GM-induced dreams of hot rod glory. You see, his dad worked for the revered company for over 40 years and it seems good ol' pop would bring his passion home with him every night, which soon rubbed off on his kids. And that was just fine with young Bryan, as he knows he was bitten by the same bug that got his dad a generation earlier.

Before he even had the privilege to drive, Bryan started tinkering on cars. So by the time he was 16 he had his first ride: a sweet 1967 Camaro, a car that he, his dad, and his brother basically replaced every part on. That car served him well and was the first part of a small Chevy hoard that Bryan has owned over the last three decades.

Over the years, our owner says he got "spoiled" by the new breed of muscle cars out on the sales lots. Creature comforts and reliable performance drew him in like a thirsty fly to sugar water. But he still could not get beyond the love he had for the vintage muscle look. He would ultimately build two wild Pro Touring cars to quench his thirst for a more modern, but still classic looking, ride.

White Light
In 2018, Bryan decided to go all out. His now and present petrol-powered urge was to take a brand-new, fresh-off-the-lot 2018 Chevy Camaro and infuse it with everything he wanted in an everyday muscle car. His goal; build a high-powered modern ride that could not only step up to the plate to do his daily driving chores, but also hit the track if ever the notion came up.

So Bryan took on his lust for the sixth-gen Camaro and hit up Glendora Chevrolet in California to order his starting point: a 2018 Camaro 2SS. With a healthy 6.2L LT1 V-8 pushing out 455 rwhp, well, this Chevy is no slouch from the get-go. But Bryan didn't want a stock Camaro that his neighbor could buy. He wanted something different. Something unique. Something custom made for him.

So he did what he had done before. He sent the brand-new Camaro on a trans-American journey directly to Quintin Brothers Auto and Performance (QB) in Williston, Vermont. There, the maniacal minds at QB would handle this Chevy's transformation into Bryan's far-sighted vision. Brothers Tim and Pete took the freshly built Summit White Camaro under their wings and then put Cole Quintin in charge of handling the day-to-day dealings of coordinating the build. Out in the shop, Chris Quintin and Brady Larock would handle the daily chores of the intricate build process. Their main goal: take an already awesome GM design and make it even more awesome-er (we know that's not a word, but it works); turning this stock Camaro into the wild custom Bryan so deeply desired. So let the games begin.

White Heat
Since they were starting with a fresh-built Chevy, all of the annoying rust removal and panel-ectomies were avoided by Bryan and the crew at QB. So the first step here was to start peeling off some of the unneeded parts furnished by GM and replacing them with some of the new and even more improved ones QB had sourced for the rebuild.

Next, they hit the chassis, working on some of the suspension add-ons they craved. A full BMR setup was ordered for the Camaro, which includes lowering springs, upper control arms, toe rods, lower trailing arms, side chassis braces, rear cradle brace, and a driveshaft tunnel brace. This massive overhaul helped give Bryan the curve-carving Camaro of his road course dreams. But there's more.

Once done with the chassis, the crew at QB headed toward the engine bay. Here, the already healthy LT1 got a dose of power from a Whipple Camaro SC Supercharger setup. Along with the generous 14 psi of push from the blower, this 6.2L also got a total LT4 fuel system upgrade, including a drop-in pump, and a mechanical one to boot. The boys at QB finish it off with a custom, in-house tune. From there, a new exhaust system was fabricated using American Racing long-tube headers with catted pipes feeding a Corsa axle-back exhaust. A Roto-Fab cold-air system keeps the cool breeze pumping into this monster mill.

Bryan knew that with all the goodies he added out of the sight lines of this Chevy, he would have to make the body on par with the rest of his bitchin Camaro. A full line of Anderson Composites panels was added to the muscular mix. These include a carbon COPO hood, Type AZ rocker panels, chin spoiler, rear diffuser, and a Type ST rear spoiler. Then there's a dose of Oracle DRL LED lighting, which includes underbody effects and a cool demon eye up front.

Carbon Creations did full front bumper ducts in carbon fiber for an even more aggressive look. Dark housing rear taillights, with Diode Dynamics side markers and third brake light add a more trick look. On the corners, Bryan went for both style and substance, opting for a set of Rohana wheels: 20x10 up front and 20x11 rear, wrapped in Michelin Pilot Sport 4S tires: 285/30R20 and 305/30R20, respectively.

In the cockpit, Wildhammer Motorsports supplied some goodies to upgrade the look and feel of the interior. Custom suede inserts and red stitching add a touch of style, while a carbon-fiber steering wheel with red paddle shifters gives it a sporty presence. A carbon-fiber dash panel is a modern upgrade and matches nicely with the shift knob of the same material. Red-stich knee bolsters and shift boot finish off the look Bryan was after.

White Out!
Once completed, the owner was over the moon with his new, new Camaro. "We never expected the car to get the type of attention and support that we have received. It is humbling and quite an honor," says Bryan. But that's not all. Once completed, the Quintin Brothers wanted to bring it to SEMA, but they were too late to get it into any of their sponsors' booths. "So when all else fails, we took the matter into our own hands and purchased our own 20x10-foot booth at SEMA. That was a big move for us and we did not regret it one bit," says Tim Quintin of their 2018 SEMA showcase of Bryan's main ride.

Of course, with any build of this magnitude, there are people to thank. The Quintin Brothers would like to send a shout-out to the crew at QB for their hard work, as well as Wheel Lab, Wildhammer Motorsports, R/T's Detailing, Level One Graphics, and Anderson Composites for their contributions to the build. As for Bryan, he's just floored by the way the car came out. "We dubbed it Sub-Zero because it's just icy clean." For now, he's happy having a one-off muscle ride that he can hop into and drive to either coast.