Let’s Talk About the Definition of the Term Restomod 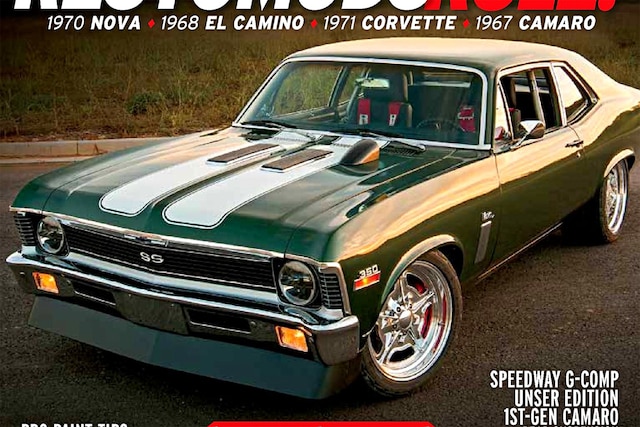 Apparently, the July 2019 issue with the tag line Restomods Rule! on the cover hit a nerve with a few of the more "mature" Chevy High Performance magazine readers as they voiced their opinion on our social media sites (Instagram and Facebook) regarding the term "restomod" being used incorrectly in relation to the car featured on the cover. It seems that some folks feel the word restomod insinuates there are or should be hard-line limitations to the number and kind of modifications a car has received, therefore excluding it from the restomod party. The car being referenced is a 1970 Nova with a variety of upgrades ranging from an LT4 engine, aftermarket suspension components, new rearend, bigger brakes, larger diameter wheels and tires, exhaust, rollcage, and bucket seats, along with a five-point safety harness mounted to a harness bar.

Now, before all those upgrades took place, the body was restored (remember that word) to appear in like-new condition, which is where we get the term "resto," short for "restored." Once the car takes on parts to improve its performance, handling, and safety, the car has now been "modified." With the car now being restored and modified, it is then referred to as a "restomod."

Keep in mind, today's classic street machines are the new-and-improved versions of restomods, but being the Internet is a place where opinions are mighty and many, a number of Chevy High Performance social media followers "informed" me that the car is not a restomod because it has Pro Touring style, a rollcage, and other modern modifications.

Now, if someone in Internetville has set a ceiling on the number and types of modifications that are allowed to be done to a car that remove its restomod status, I missed that meeting invite, or maybe it's in my spam folder. Granted, in the late-'60s and early-'70s, modifications to street cars were somewhat limited due to the availability of aftermarket parts, so basic mods consisted of mild engine upgrades, a chrome air cleaner and valve covers, maybe a tunnel-ram intake, wheels and tires, exhaust (side pipes even), traction bars, shifter, and a big-ass tach perched somewhere on top of or under the dash. Cars that received these modifications soon after purchasing new off the showroom floor were considered "day-two" restos. The Nova in reference is definitely not that.

I understand that we have various muscle car sub-categories such as Pro Street and Pro Touring, but regardless of the number of upgrades and how wild or radical said upgrades are, the cars were restored and modified, which in the spirit of all things said, falls under restomod.

I get it—some people can't wrap their head around the term when a car plays host to more aftermarket products than the scant amount of original parts it once came with. But with the vast amount of performance parts available to improve the functionality of our classics today, let's continue the conversation and entertain the idea that it may be time to reevaluate what a restomod is in today's terms.

Still not convinced? Then go ahead and give Pro Touring top billing and refer to a vintage handling street car as a Pro Touring restomod. This is certainly not the first time this term has been used, but at least it differentiates a Pro Touring car from one of lesser-handling capabilities and modern amenities.

Hopefully this makes sense to all the muscle car enthusiasts out there and we can agree that no dollar amount or number of bolt-on upgrades should nullify any car from being referred to as a restomod.

If you have the end-all definition of a restomod I want to hear it. Email me at nick_licata@motortrend.com.

And, in the next issue we'll nail down the exact definition of the term "hot rod."

Nope. I'm not even gonna go there.