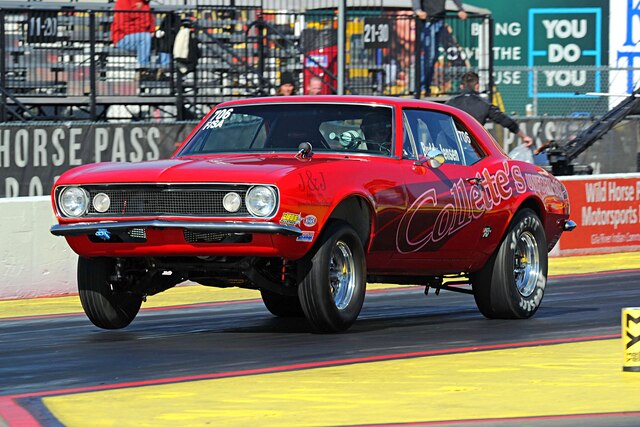 Clean Slate Camaro
Arizona's Buddy Jensen is typical of many Sportsman drag racers out there; despite limited returns, he stays the course. While not collecting any major event prizes (yet) during his 12-plus-year career stint racing his F/SA 1967 Camaro, Jensen and his wife, Linda, still enjoy the chase. Using a self-assembled 350ci engine (rated by NHRA at 286 hp), Buddy has so far coaxed a best time of 10.86 from his machine while racing pretty much exclusively within NHRA's West Coast divisional and national event scenes. The Jensens fund their racing weekends as 100-percent independents. Buddy's trade is selling machine shop equipment (J&J Sales), but they also use their Camaro to help advertise their family owned Collette's Uniform company. This well-maintained Camaro features DuPont Firecracker Red paint. Buddy reports that he is grooming his young grandson Ethan as both a potential crew chief and team driver for the future.

A Unique Piece
There is no denying that the vast popularity of Top Sportsman racing worldwide has a direct correlation to the massive variety of entries within that category. That notion is certainly evident with the 1965 Chevelle raced by Jessie Wooton (Visalia, California). Jessie reports that his car was originally built by Sarmento Racing and was kept in a barn before he acquired it. He started racing it in 2009 within the NHRA Hot Rod Heritage Racing Series, running in both C/Gas and B/Gas, where he collected the 2014 championship. In 2017, the car evolved into its present state and to the much quicker T/S class. After giving a 555ci big-block on nitrous engine a go, in 2018 they upgraded to a ProCharger supercharger and a 540ci big-block built by Advanced Product Design. Now with some 2,000+ horsepower to work with, this super-slick black Chevelle flirts with the high 6-second zone and over 200-mph terminal speeds. Jessie's focus remains running NHRA divisional T/S events, and he offers his special thanks to Dan Horner and Geneva Nash for all the hard work and the ongoing support of his wife, Darlene.

Jumpin' Jack's "New Flash"
Pennsylvania's Jack Matyas has a new COPO Camaro toy to play with. After debuting this 2012 model late in 2018 (testing only), Jack is now hitting the NHRA divisional and national event scenes as an FS/D Stock Eliminator car. This is a bona fide factory-built COPO by Turn Key Automotive (Oxford, Michigan) after Jack supplied them with a homemade body-in-white. He credits Tom Goldman of GAS Racing (Allentown, Pennsylvania) with help on the driveline and suspension finishing touches. His engine program is by David Barton, a 427 (NHRA factored to 473 hp) that put out over 800 hp on Ray Barton Engines' dyno. Running on a 10.60 index and scaled at 3,760 pounds, the car went super quick during its very first NHRA national event, the 2019 Gatornationals: a 9.65 at 138. Jack receives sponsorship support from ATI Performance Products (J.C. Beattie) and Frank Carfagno (Carfagno Chevrolet, Norristown, Pennsylvania). His crew chief is Joey Burns (service manager at Carfagno). This Camaro has a cool convertible roof motif and the credit for its great look and paint goes to Warren Keeler (Keeler's Auto Body, Allentown, Pennsylvania).

Into the FX Fold!
NHRA's SAMTech.edu Factory Stock Showdown class has a new, significant player this season. Ryan Priddy (Chino, California), who spent the last decade working and overseeing Nick Mitsos' California-based Mountain View Tires' NHRA Pro Stock team, has transferred into the drivers seat of the new Mountain View Tires FS/XX 2019 COPO Camaro. Delivered in September 2018, this race car made its initial runs last October as an FS/A car, where it ran very deep under that index and also reset the national record. This Camaro was originally a 2018 model but has been converted to 2019 specs with front and rear trim face, which was done to take advantage of using the new Magnuson supercharger, which was introduced by Chevrolet for this season. With the new supercharged 350ci engine, Ryan confirmed the Camaro will be 100-percent devoted to the NHRA's Factory Stock Showdown events going forward. Ryan's COPO, which features associate sponsorship from both NAPA Auto Parts and Havoline, was credited with a super-quick 7.934 run during that record-setting first SAMTech.edu Factory Stock Showdown event of the season at Gainesville.

Jeg Coughlin Jr. Shares What it was Like Growing up in a Racing Family » Read More
Let’s Talk About the Definition of the Term Restomod » Read More
1957 Corvette Barn Find