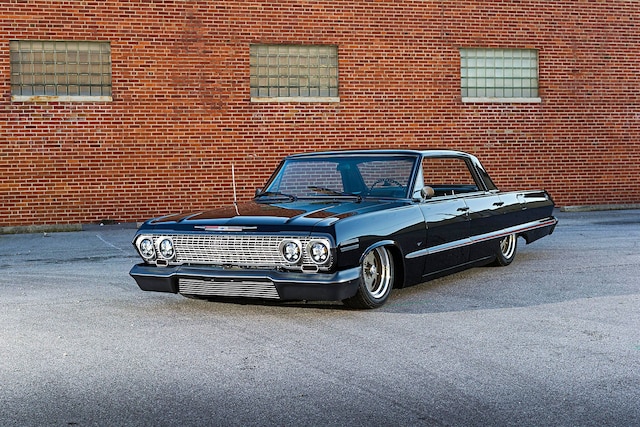 While Chevy High Performance would be remiss did it not include feature cars that are dressed all the way out, nothing overlooked, no expense spared, those charmers really don't stand for most car enthusiasts nor do they accurately reflect the taste and the reach of the readership core. Sure, everybody in their heart of hearts covets such a prize, but at the same time they know that they are bound to address vital concerns having nothing to do with such a whimsical notion.

Ben Bland is one of you. We're impressed with his philosophy as well as his diversity. When did you ever drool over a four-door? In recent memory, we can think of maybe two such features displayed on these pages. Bland's Imp is perfectly defined by a radical and adjustable stance, just the right tires and rims, and a paint treatment that is at once sober and intoxicating in its execution and its purpose.

Ben's take on the B-body quattroporte goes like this: "The build process went pretty quick, so there weren't a lot of shenanigans to speak of. The main things that I really want to show with [the Impala] is that it doesn't take a lot of money to build a really nice car, just time and attention to detail and that we all need to start getting our kids and younger people involved in building things like this so that they can feel what it is to take something that may look like junk in the beginning and make something worth showing off in the end." He did the work on his Impala at Ben Bland Customs.

In the beginning the plan was different. Ben bought the big Imp with the idea that he would part it out, but quickly surmised it was much too nice to do that. It had lain unmolested in a barn for nearly 30 years. It was in pieces. "All the trim and small components were in the trunk. We started tearing the car down to the frame on March 15 and had the car done for the Midwest Dragfest in Sedalia, Missouri, on June 1, stealing weekends and after-work hours."

According to Ben, "about 85-percent of it was built off Amazon convenience, just to see if we could, and every piece of the car has been rebuilt or replaced. Working with great friends and close relatives [Hudson Bland, Kail Bledsoe, Gary Smith, Thomas Hartline, and Leroy Ross, among them]." He said the best part was "getting my three boys involved in creating a beautiful car and hopefully build the passion that I have!"

Ben screwed the frame to a thick metal slab known to be absolutely flat, object being to true, straighten, clean, and reinforce the ladder, as well as to fabricate brackets for the air springs and the shock absorber mounts, critical to the long, lean, slidin' thing's silhouette and driveability. So he forked some funds for the SS-5 system from Slam Specialties out on the West Coast in Fresno. As the plan was most definitely bent toward cruising as well as maintaining fiscal responsibility, Ben saw no reason to change out the rest of the suspension, so he rebuilt it instead.

In fact, the Imp doesn't slide around at all, but goes mainly in a string-straight line. Damping is by ordinary Monroe shock absorbers, but Ben arms and adjusts the SS-5 system with Viair 480 compressors, Air Maxx gauges, and feeds it from a 7-gallon air reservoir. He upgraded friction with disc brakes in front, but left the drums on the rear. The axle is stock with the original 3.08s, but without a two-legged differential. Got to get those wheels right, too. Instead of a familiar five-spoke clich , Ben fixed the dry-lakes vibe of unorthodox Rocket Racing kidney beans and capped them with skinny, sort-of-period-correct Firestone Firehawk 225/50 tires.

Since the big car was an on-the-ground cruiser and would only see gasoline pumps, not dragstrip time cards, Ben relies on a rebuilt 283 by Leroy Ross. Ross tweaked it with a performance intake manifold topped by a 600-cfm carburetor and then dropped in an HEI ignition to make the fire. For a little flair, he installed chromed ram's-horn exhaust manifolds and hooked them to a 2 1/2-inch system that barks through Flowmaster 40-series mufflers. To enable reliable movement, Dewayne Penn in Eldo Springs (that's what the locals call it) worked the Powerglide over but didn't include an enhanced torque converter.

Ben Bland Customs did the requisite body corrections. Bland swung the paint gun and covered all the steel with Axis Prestige Black and Clear and flat-painted the grille section. All the trim and the bumpers got Gun Metal Grey and then Axis flat Clear and flat Silver. The headlamps are LED; the taillights are modified stock. Bland commands from a pristine, unmodified interior save for the sweet Pete Ciadella Interiors upholstery and seat covers.

Then there's the human element: "Sure, trophies are awesome, but these cars are built and surrounded with the memories of the people we built them with and friends that we make along the way. Trophies sit on a shelf and collect dust as we forget where and when we won them, but we never forget the friends we have made through car shows—an amazing group of people that we never forget."

Yup, this is respect and civility at their finest. CHP