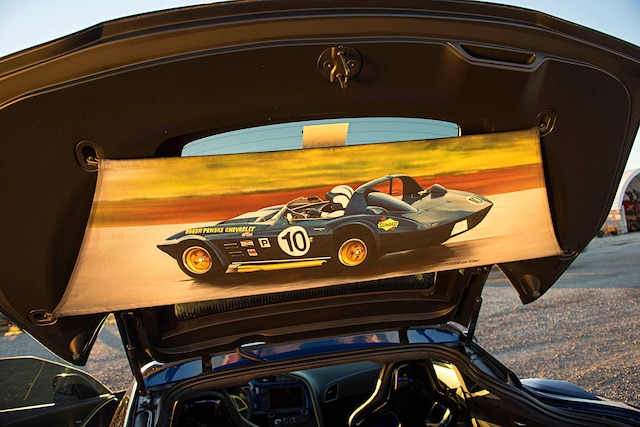 Only a select few Corvettes attain a status worthy of emulation. The pinnacle of highly coveted Corvettes clearly points to the '63 Grand Sport. While the history of this legendary "Lightweight" has often been told, it's also being retold as rolling tributes.

Some are reproductions that use either a custom-built or a factory Corvette chassis, but the striking coupe shown here is neither. It's a 2017 Grand Sport that recalls the distinctive look of the famed #001 Grand Sport that Roger Penske bought from Chevrolet in 1966 and converted to a streamlined roadster for racing (along with chassis #002). When first competing at the 12 Hours of Sebring in 1966, it was painted blue and accented with yellow wheels and side pipes, and Sunoco decals as well.

What led Jeremy Welborn to create his stunning tribute to an iconic Corvette? That's a story with some surprising twists and turns, beginning with a bittersweet experience.

It all started when a friend of Jeremy's, Dave Dolan, ordered an early production run of the then-new 2014 Corvette C7. An enthusiastic historian for the Corvette Club of Richmond, Virginia, he and wife, Lori, always were among the first to order the latest-generation models, and always in yellow. Their enthusiasm waned, however, when he discovered that the local dealership had ordered the wrong transmission, manual instead of automatic.

Seizing the moment, Jeremy asked the dealer if anyone else had stepped up to buy this new Stingray with a seven-speed manual. Not yet, so he made a 1,400-mile trip from his home in Oklahoma to Virginia to grab it off the lot.

Over the next two years, Jeremy spent untold hours lavishing attention on the car, turning it into a show car with a "bumblebee-style" color scheme in yellow and black. But this showpiece was no trailer queen. He drove it to shows on both coasts, and everywhere in between. And when the Z06 debuted, he planned to enhance his car with a custom widebody treatment. Then a deluge ensued, literally.

After attending church services with his family on a Sunday morning, reports of near -biblical flooding came in. Jeremy suddenly wondered if the drainage canal right next to the shop where his Corvette was being reworked was doing its job. He took a trip over there and was shocked and dismayed to find the water level was two feet above the shop's foundation.

Once the waters receded, he found that even though his Corvette was on jackstands, it had been flooded right up to the seat cushions. A total loss ... well, sort of.

Since he's in the insurance business, Jeremy knew the ins and outs of a damage policy, and thanks to an "inflation guard" provision in his coverage, he received an additional six percent above the "agreed value" of the Corvette.

Undeterred by this heartbreaking setback, Jeremy used the funds to purchase a new 2017 Grand Sport. In what color, though? He already had a set of yellow wheels on hand that he had planned to put on the 2014 Corvette, and wanted to change the body color to blue on the 2017 model. But he wasn't quite sure how to combine them until he came across a picture of the '63 Penske Grand Sport noted at the outset. "As fate would have it," he notes, this image was an epiphany for him. So he ordered his car in Admiral Blue with yellow stitching and steering wheel paddles, and the same hue for the brake calipers.

After taking delivery at the Corvette Museum in September 2016, he immediately began customizing it as a "Tribute" car. Over the next five months, he installed an impressive array of aftermarket upgrades. Rather than ordering them in yellow, however, "I had Steve Ray of Airbrush, Inc., paint all of the yellow parts of the car instead of ordering some parts that were already painted yellow," Jeremy notes. Why not use the factory colors?

"Yellow is a difficult color to match," he explains. "And the yellow on the skirts, splitter, and wheels didn't quite match the yellow Steve Ray used, even though the paint codes were the same."

In addition, ACS Composite supplied a set of enhanced front mud flaps and rear diffuser fins, also sanded and painted by Steve Ray. Normally the Grand Sport comes with a flat-finished front grille, "But I wanted one that was high gloss finished in carbon flash paint, like the Z06 grille," Jeremy notes. "So I ordered a Z06 front grille from Cultrag Performance, and Steve Ray added the yellow accents."

Matching the colors of those items are RPI Designs' side skirts, front splitter and various engine covers. American Car Craft supplied several stainless covers in the engine bay that were sanded and painted as well.

In the cockpit, Jeremy wanted an extra special treatment so he asked Auto Dynamics West to fabricate a rim that simulates the Corvette Racing's C7.R steering wheel. And had Apsis USA create a custom horn pad cover. To drive home the inspiration for the color scheme he had a custom airbrushed shade made for the rear cargo area that depicts the famous Penske Grand Sport.

Steve personally handled the majority of the paintwork on the car, both inside and out, including the engine bay and mural under the hood. Every body panel, with the exception of the lower rocker panels, was removed from the car for this meticulous process.

After that, Jeremy trailered it to Esoteric Auto Detailing in the Columbus, Ohio, area where the shop installed SunTek paint protection film and Kamikazi Ceramic Coating as a final finish.

Once done, one of Jeremy's most memorable experiences with the car was a coast-to-coast trip in August 2017. "I put almost 9,000 miles on the car during that month alone, and a total of 18,000 miles on it from March through October 2017," he recalls. That epic trip consisted of a trip from Oklahoma to Southern Colorado, then onto Moab, Utah, and finally to the Portland, Oregon, area to spend time with friends and to attend a Corvette show in Cottage Grove. "My 'Tribute' won six awards at that show alone!" he smiles.

Then he returned to Oklahoma and then set out for a trip to Corvettes at Carlisle in Pennsylvania, and on to Maryland to visit Mike Furman at Criswell Chevrolet. It was there that the marketing director saw the car and asked if Jeremy would like to do an interview about the car. The video link in his email shows several times a day in their dealership. After that, he was off to see friends in Richmond, Virginia, before heading to Bowling Green, Kentucky, for the National Corvette Museum's Anniversary Celebration.

One more challenging incident has to do with the trip Jeremy and his wife, Gina, took the car to Oregon in August 2017. "As we left southern Colorado and crossed over into Utah, we were suddenly on a two-lane highway that had just been chip sealed and the speed limit was 45 mph as a result," he recalls. Trucks coming in the opposite direction were traveling the usual 65 mph and throwing the chip seal at his custom-painted Corvette as they passed. The front fascia took quite a few hits, but the paint protection film did its job for the most part. However, a few penetrated the film and impacted the paint. So when Jeremy took Tribute back to Steve Ray this past winter, he had him repaint the front fascia, too.

For all the customizing that Jeremy had done to pay homage to the Penske Grand Sport, a few comparisons between the specs of the two cars are intriguing. Both had a 6.2-liter V-8 (only for a brief time on Penske's, though, as it went through multiple engines). Even though the C7 Grand Sport boasts 460 horses, Penske's engines delivered anywhere from 360 to 500+ horses, depending on the race and time period.

While they are in the same general arena of horsepower, the power-to-weight ratio differs substantially, since the "Lightweight" tipped the scales at only 1,980 pounds or so, due to the use of paper-thin body panels and a number of other weight-saving components. Obviously, a production car is burdened with all sorts of creature comforts and DOT-mandated baggage, so Jeremy's car has much more mass, coming in about 1,500 pounds heavier.

Even so, his latest Grand Sport street machine gives a good account of itself, while the race version of the '63 GS was a hot mess on the track. So one is a sophisticated and sure-footed runner, while the other helped the Corvette to make its bones. Together, they are impressive statements about Corvette performance. Vette