Big-Block 1966 Chevelle Restomod is the Object of Obsession

There was only one way to fulfill his obsession: build the 1966 Chevelle of his dreams 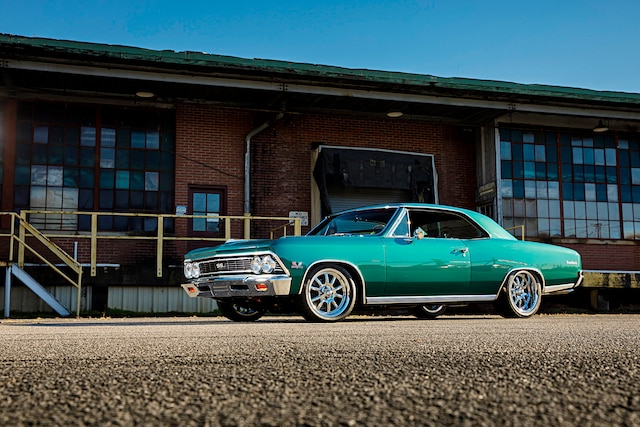 It shouldn't be too difficult to wrap your mind around the idea of an obsession. Everyone has experienced this all-encompassing emotional experience at least once. It takes over your thoughts, your desires, and your ability to be rational. For a lot of people, their obsession passes by, either through its fulfillment or the passage of time. But, for Terry Kamp, his obsession went unfulfilled nor did time wash it away. Terry's obsession stuck it out through thick and thin, lasting a full half-century.

So what could possibly hold one's attention for so long? A Chevy, of course!

It all started over 50 years ago, but we'll let Terry explain it. "My wife and I just celebrated our 53rd wedding anniversary. One of our first car purchases was a used 1966 Chevelle SS 396/L78 with a car loan payment of $33.75 per month. A few years later, when buying our first home, the credit requirements necessitated we sell our prized Chevelle—gone forever. However, my obsession and love of that 1966 Chevelle has never gone away. In 2013, I built a 1964 Chevelle SS big-block clone of the rare 396 Z16, yet it still wasn't the same as the '66 I owned some 50 years ago."

When the cravings just wouldn't subside, Terry decided there was only one thing he could do and that was to buy another 1966 Chevelle. But he knew his obsession was far deeper now, and simply owning an old Chevelle similar to the one his wife and he drove decades ago wouldn't cut it. At this point, Terry needed to build a '66 Chevelle that would match or exceed the expectations he'd built up for the car over the years.

"Recently, I became aware of an original, solid 1966 Chevelle SS that needed a complete restoration," Terry told us. "I decided it was time to satisfy my obsession and purchased the car. My intent was to restore and retain the stock exterior appearance, right down to using the original Tropic Turquoise paint color. On the other hand, I wanted to use the latest powertrain and suspension technology. In essence, I planned to restomod the car to achieve superior performance and handling."

And build a restomod he did. First thing's first, Terry had the body pulled off the frame then all the stock suspension components were removed. The frame was powdercoated to get it ready for modern tubular control arms in the front and a four-link in the back. QA1 adjustable coilovers were installed to help the Chevelle achieve the perfect stance while disc brakes with 11-inch rotors at all four corners help to reliably bring the car down from speed.

Speaking of speed, Terry wanted nothing but a big-block under the hood of his 1966 Chevelle. "My goal was to re-create that big-block sound and have enough engine torque to light up 10-inch-wide rear wheels," said Terry. With that in mind, he had a stout 396ci block built up with a 0.030-inch overbore and a forged rotating assembly. A healthy cam and Edelbrock Performer RPM intake manifold topped by a 770-cfm Holley Street Avenger carburetor turned the big-block Chevy into a solid performer. As for the sound Terry mentioned, well, a full 2 1/2-inch polished stainless steel MagnaFlow exhaust system certainly took care of that. Behind the 396, Terry opted for the iconic Muncie M22 close-ratio four-speed manual known as the Rock Crusher, which sends the power back to a 12-bolt rearend with a limited-slip.

For Terry, the power and performance weren't the whole focus; he also needed the car to have the right look. Step one of that quest was a no-brainer, as Terry had always wanted the Chevelle to be painted in Tropic Turquoise, just like the car he and his wife owned 50-some years ago. What that car didn't have back then was access to boundless wheel and tire options to give the car the perfect stance and a unique look. Terry decided on a set of Ridler 650 wheels wrapped in BFGoodrich g-Force Sport Comp 2 tires.

Inside the Chevelle, Terry continued with the restomod treatment by having the car soundproofed and insulated with Dynamat before receiving some other choice custom touches. A modern tilt steering column and two-spoke, woodgrain steering wheel blended perfectly with the original gauges, which were converted to LED lighting. Then, a pair of custom bucket seats were wrapped in black leather and treated to some fancy pleating and embroidery.

After the Chevelle was completed, Terry and his wife took the car out to a few local shows and brought home two Best of Show awards. At the end of the day, he admitted that the project took "lots of work and expense, but was well worth it." But it was what Terry continued to say that ties a nice bow on both the build process and the feature of his 1966 Chevelle: "After 50 years, my obsession to again own a 1966 Chevelle SS has been satisfied." You just can't ask for anything better than that, now can you? CHP