This Sinister C5 has a Soft Side 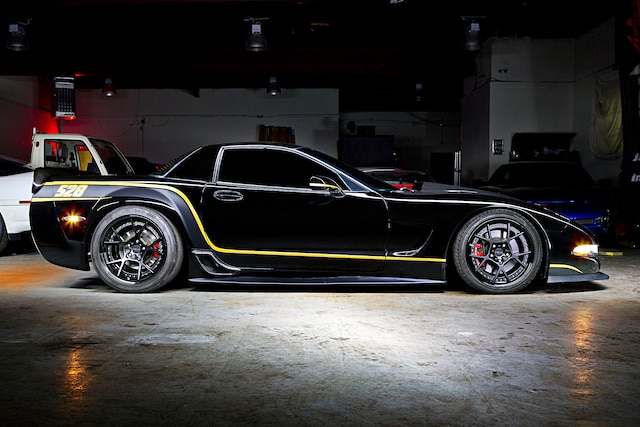 The automotive hobby is, on average, overtly masculine in nature. Speed, power, striking looks, screaming exhaust notes. Corvettes are certainly no exception as they are usually some of the fastest, loudest, and most unique looking sports cars around. But just because brash masculinity is the norm doesn't mean that it's the rule. In fact, most of the time there is a soft side if you know where to look.

Take David Franza's 2001 Corvette Z06 for example. Did you notice the digits "528" inscribed on the rear quarter panels? It might appear to be a flashy decal or racing number, but all it takes is a brief conversation with Franza to find out that it means so much more. Add in a forward slash and those numbers becomes 5/28—the date his mother passed away back in 2016. It's a date, and subsequent season of life, that Franza will never forget and it's right there on the side of his Z06 for the world to see.

This was a pivotal time for Franza, and understandably so. A short while after her passing, Franza realized he needed something to get his mind off things. A project car would be just the thing. Through a friend, Franza found out about a Volkswagen R32 for sale which he pulled the trigger on a little too hastily and bought the little VW. It didn't take long for Franza to realize this wasn't the car he really wanted. As a kid, he grew up watching Dale Earnhardt race a Corvette C5R and always had a Corvette poster or two on his bedroom wall. Franza promptly sold the R32 and kept his eyes peeled for the perfect C5 Corvette he could purchase instead.

One morning in December of 2016, while scouring the web, Franza finally found a Corvette for sale that was just right. It was a 2001 Z06 just a few hours' drive from his home in Mount Laurel, New Jersey. He told the seller he would come pick up the car later that evening as soon as he got off work. Unfortunately, December weather picked up throughout the day, and by evening it was in the '20s and snowing. Franza decided to make the trip anyway and ended up driving the Corvette home through the mountains in a full-on snow storm.

After getting the C5 Corvette back home to New Jersey in one piece, Franza was just happy to have the Corvette of his dreams and planned to keep it as it was and just enjoy it. At this point we're sure you've seen the photos and noted that the Z06 is hardly stock, and you'd be right. Not too long after purchasing the Corvette, Franza came across a killer deal on some speed parts that he just couldn't pass up. He told us, "The plan was to keep it stock and enjoy it but then the deal came up." This led him to think, "If I decide to do it in two years it'll cost twice as much so I might as well do it now."

The deal landed Franza with a set of rebuilt heads, cam, Vortech V2 supercharger, and a Lingenfelter fuel delivery system complete with upgraded injectors and fuel pump. He took all his newly acquired speed parts, along with the Z06, over to a shop called Horsepower Addicts in Wilmington, Delaware to have everything installed.

After it was all said and done, the 2001 Corvette was making some serious power. When they threw the car on the chassis dyno for some tuning it made so much power the stock clutch just couldn't handle it. Before the clutch let go, the C5 put down an impressive 713 horsepower and 637 lb-ft of torque to the tires on 12.5 pounds of boost from the Vortech supercharger. The guys at Horsepower Addicts said the car would have churned out at least 750 wheel horsepower had the clutch functioned properly.

The breakage on the dyno forced Franza to have a McLeod RXT clutch installed that would better cope with the new power demands. Then, believe it or not, all those horses stampeded right through the stock rearend. So that had to be mended along with upgraded axles. After that, Franza realized the car couldn't put the power down anyway and needed more grip. A new set of wheels and tires were in order. He selected a set of Rotiform KPS wheels measuring 18X10 in the front and a massive 18X13 in the rear paired with 255/55R18 Achilles ATR Sports tires front and big ol' 335/30R18 Hoosier R7s out back.

The new wheel and tire package in the rear was great for traction but not so much for fitting within the stock wheel wells, so the modification snowball continued. With more than a little help from his friend Fredi Cortes, Franza fitted the Z06 with a new set of widebody rear quarter panels from Lewis Five Motorsports. They also swapped the stock hood for a fancy carbon fiber unit made by Seibon Carbon. With the new rear fenders and hood, the Corvette needed a new paint job to tie it all together. But, instead of spending the big bucks and permanently staining the car with paint, Franza decided to have the Z06 wrapped in a gloss black from 3M. The wrap wasn't complete though without the number 528 and accompanied graphics all done by A-Plus Auto Styling in Forest Hill, Maryland.

Inside the cabin of Franza's 2001 Corvette, Cortes helped add some safety and style by installing Corbeau Evolution X seats with a Brey-Krause harness bar and RJS harnesses. They also swapped out the stock steering wheel for a smaller-diameter, OMP black suede wheel. Then, underneath the car they upgraded the stock transverse leaf springs and shocks to RS series coilovers from Open Road Tuning. Oh, and did we mention the Corvette has LG longtube headers and a Borla straight-pipe exhaust? So, yeah, it's loud. Real loud.

Although the car could probably do some serious damage as a weekend warrior on the drag strip or autocross, Franza mainly uses it as a fun driver. When you add it all up, it becomes clear that his wild supercharged C5 turned out to be exactly what he needed: a powerful distraction.