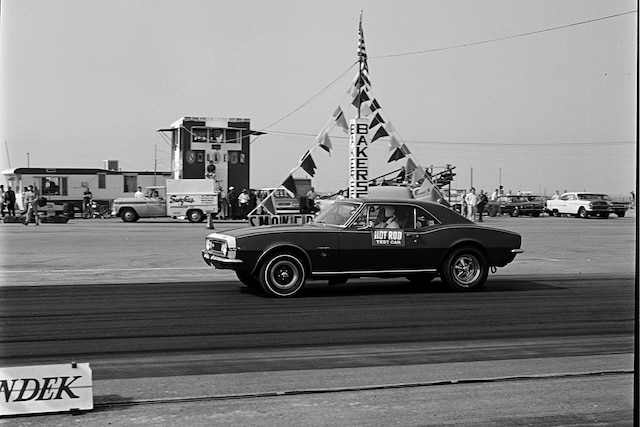 Many of you will recognize this SS as one of the most historically significant Camaros of all time, the Hot Rod magazine project car shepherded through a series of upgrade articles in 1967 by then-Editor Jim McFarland.

The car first appeared at Petersen Publishing in June 1966, and McFarland took it to several aftermarket companies so they could prototype performance parts prior to the car's fall launch. That's how it earned its firsts at Edelbrock and Hurst. These photos are from early 1967, when its stock 350 V-8 had been pulled out for modifications. Bill Thomas, Chevy's West Coast performance guru, knew that the factory was planning to make a big-block available in the car, and he offered McFarland a "fresh" 396. Knowing that the upcoming 1967 Winternationals would have a new Super Stock class, and seeing an opportunity "to provide the Camaro with even more exposure," McFarland accepted Thomas' offer. "So our daily driver was the first recipient of the fat-block engine."

McFarland took the repowered Camaro to Lions on a Saturday afternoon and made an easy first pass. "On the second run, top of Third gear at about 6,200 rpm, a rod bolt parted company and suddenly we were sideways covering both lanes with six quarts of oil soup." Back at Thomas' shop, "we surveyed the damage—broken crank, camshaft in two pieces, both heads cracked, seven broken valvesprings, eight pistons and seven connecting rods. Two weeks later, in a carefully wrapped and hand-addressed box, came rod number eight from Lions manager C.J. Hart. A grass mower had spit it out about 50 feet from the track."

It turned out that "fresh" 396 had done more than 500 miles at Riverside for NASCAR tire testing.

A second big-block was installed by Thomas, and McFarland went to Irwindale for some shakedown runs, where they shared the track with stock Oldsmobiles being tested by the magazine. There, the car "annihilated two sets of spider gears in one day, thereby preventing the HRM team of Don Evans (driver), Jim McFarland (mechanic), and John Thawley (beer chaser) from evaluating the Thomas' '396,'" McFarland recalled. Bill Jenkins was there that day, too, putting his Chevy II through its paces pre-Winternats, with an eye on the "editors-cum-racers," as both Jenkins and the HRM team would run in SS/C.

As luck would have it, the Camaro and Jenkins were paired in the first round of eliminations at Pomona. Jenkins must have been concerned about what he saw at Irwindale, because "with one yellow light still showing on the Tree, Jenkins red-lighted," said McFarland. He immediately withdrew the Camaro, as the guys never figured their "for exposure only" entry would actually be competitive.

Competitive it was, and for good reason. Just before the March Meet a couple weeks after Pomona, McFarland "commandeered a P&G meter and used it to pump our 396. It was actually a 490 incher—hey, Thomas didn't name his kit cars 'Cheetahs' for nothing." With extra weight in the car and entered in the A/MP class at Famoso, Evans made an 11.84-second run at 119.86 mph "on his first full pass," said McFarland.

"We retired the car from competition on the spot," he would say later. Soon after, the Camaro's much-modified 350 would be put back in, and the car would be sent around to more aftermarket companies for further parts prototyping. In all, 16 companies used the car to develop parts for the Camaro.

As times changed and new concerns put pressure on the performance industry, the Camaro—still in McFarland's capable hands—would serve as a testbed to illustrate the industry's ability to build powerful, yet clean-burning and fuel efficient engines. That, though, is another story for another time.