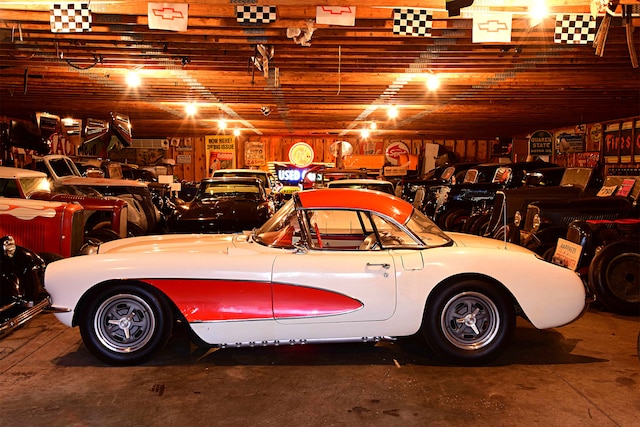 Let's say that you're one of the lucky chosen few who actually get to act on a lead that will bring you face to face with a vintage Corvette that's been mothballed away for decades. When you come to the realization that it's not a dream and that the car is actually salvageable, what then? Do you maintain its integrity and treat it as a preservation piece or take on a full teardown to bring it back to concours specifications? Much of it revolves around personal feelings and if you have a connection to the car once you get it home. As they say, it's only going to be the way it is once and if you change it the past will become erased. Dave Simard of Leominster, Massachusetts, was faced with this recently regarding the 1957 Corvette you see across these pages. His decision to preserve it with a twist was something he had envisioned doing for many years, he only needed to find the right candidate.

Sometimes things happen when you least expect it and that's what evolved when Dave was having a casual conversation about old Fords with good friend Joe Caputo. In the discussion, Joe advised that he had just followed-up regarding a recently unearthed 1957 Corvette with a potential buyer, who decided to pass on the car. Without wasting a minute, Joe gave Dave the coordinates for where it was located in Upstate New York. Taking a trailer with him on the journey, it was a perfect opportunity to think about his plans for the car, should it be the one. Upon arrival, he met with the current owner who advised that he was the second owner of the car, having purchased it in 1965 and driven it till 1972 when it was parked, dust-covered and having not run since. A close inspection revealed that it was indeed a numbers-matching code 469C 283ci V-8 packing 270 hp linked to a manual transmission. Sitting in the garage, the car called out to Dave with its endless potential, thus making the decision to exchange cash for the title an easy choice. Once loaded on the trailer he hit the road back to Massachusetts to get started on the new treasure.

For Dave, it all started when his dad gave him his first car: a 1931 Ford Model A coupe at age 14. It wasn't long till he installed a 283ci Chevy V-8 and converted it into a hot rod, still owning the car today. By the time he was 16, he was working at Wachusett Speed Shop showcasing the latest parts to local racers while also supporting the company every weekend at the drags where they fielded a 1957 Chevy and 1965 Nova. With plenty of inspiration surrounding him he concentrated on honing his fabrication and metalworking skills, as well as developing an engineering background.

It wasn't till 1974 that he purchased his first Corvette: a 1966 coupe powered by a 427ci big-block. The car joined the ranks of a number of early Ford hot rods that he would continuously drive cross-country to a number of national rodding events. As the years passed he opened East Coast Custom in his hometown with his lovely wife, Lisa. His skills led him to become one of the most well-respected traditional hot rod builders and vintage Ford experts in the country, whose personal collection is enough to leave any true hot rodder breathless.

For Dave, when studying the evolution of the Corvette he was always fascinated with how it was presented by owners at various competitive events. Regardless if it was at the dragstrip with a straight front axle, radiused rear wheel openings and a supercharged V-8 or low-slung on a road course passing the competition one thing was for sure, that the model embodied high performance at its finest. In channeling a classic motorsports vibe for this build his thoughts referenced a defined vintage racing history from back in the early days when Corvettes ran at Sebring. The time-stamped early road race feel is something you rarely see in a vintage Corvette today, especially one that looks like it was parked after a hard season back in the late '50s. By retaining the original heavily patina'd paint he felt the look could be preserved to well represent the past. Let's take a peek at what makes this Corvette special as Dave works with team member Ryan McDonald to take on the build.

Since the extra-rigid box girder frame reinforced with the original X-member was rock solid, a decision was made to leave it in place and concentrate on refreshing the original suspension. Out back, the factory Posi rearend packed with 4.11 gears was rebuilt by Dave and set in place along with fresh leaf springs and tube shocks. Up front, the stock independent suspension was completely rebuilt including new tube shocks and antiroll bar while also being lowered approximately 1 1/2 inches thanks to Dave removing 1 inch from a set of new coil springs. When it's time to cut speed, the stock rebuilt master pushes fluid through steel lines to 11-inch drum brakes at each corner. One of the most unique features involved injecting a road course feel to the C1 with a set of original 16-inch Halibrand kidney bean magnesium knockoff wheels capped with vintage Dunlop racing tires. Once the wheels and tires were mounted to the car it appeared that the front wheels needed to be narrowed from 5 1/2-inches width to 4 3/4-inches. Wanting a better proportion to the wheels, he enlisted the talents of Eric Vaughn of Eric Vaughn Machine in Monrovia, California, to address the matter. The final look added a perfect balance.

When it came time to addressing the driveline, Dave made a decision to pull the original numbers-matching engine and trans to preserve them and build a fresh setup for the street. Starting with a clean 327ci Chevy iron block, he began the assembly, which included a stock forged crank linked to matching rods wearing a set of forged aluminum pistons generating an 11.1:1-compression ratio. A 1970 Chevrolet LT-1 cam with solid lifters adds a perfect bump while a set of reworked 2.02 fuelie heads generate plenty of power. The crowning touch is a 1957 Corvette dual-quad intake sucking air and fuel through a pair of restored Carter WCFB four-barrel carbs topped by original air cleaners. The patina'd original Corvette finned-aluminum valve covers are a perfect accent to bring it all together. A Chevy dual-point ignition lights the fire while spent gasses dump through original ram's-horn exhaust manifolds to 1966 Corvette side exhaust for the ultimate in sound. Power moves through a 1966 Muncie four-speed packed with an 11-inch Centerforce single-disc clutch and matching pressure plate to a balanced driveshaft.

There's nothing better when bringing a vintage Corvette back to life than having its original survivor paint intact. Having a well-earned patina coating its shell, the car tells a story of its history and lets your imagination run wild with all the experiences it must have had over the decades. When Dave studied the car's exterior, he envisioned a few updates to tie it to a vintage road race style. Starting at the front, he crafted a very subtle polished stainless nerf bar. He followed by fabricating a 1-inch square wire mesh grille insert incorporating the same material used on the early C1 headlight covers. Deleting the original factory exhaust in lieu of the side pipes left the factory exhaust bezels empty, which gave the car an unfinished appearance. Dave filled the bezels with backup lights to give the area a completed look. Finally, all the body trim was removed and replaced once returned from being restored at Jon Wright's Custom Chrome Plating in Grafton, Ohio.

The factory dash is filled with all the original dials to monitor the vitals while the factory steering wheel navigates the course and a Hurst Competition-Plus shifter pulls gears. The interior survived the decades fairly well, especially the original seats, which were re-covered sometime in the mid '60s with white vinyl in a classic roll and pleat pattern accented by red carpet. Dave's efforts to preserve the car while adding a hint of vintage racing roots came out perfect and we're sure he and Lisa are enjoying plenty of miles on the open road, and to us that's the real deal. Vette