Classic Car Studio’s latest project is shaping up to be a hell of a ride! 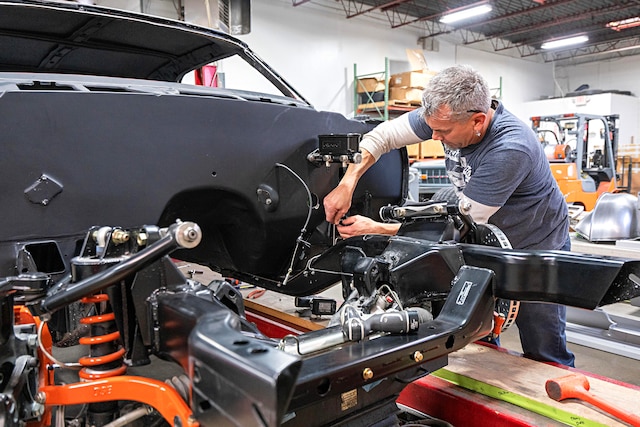 The shop's always busy over at Classic Car Studios (CCS), consistently pumping out primo, grade-A Chevy muscle rides for all of us to ogle over. And once again the boys at CCS are not going to disappoint with their latest big-powered Chevy build. Now, don't let the name throw you off, as this is no Mopar hot rod, it's still 100-percent GM branded, built up and bodacious-ly badass.

This Pro Touring Bowtie behemoth is one sweet Camaro to say the least, built with the best parts that American bucks could buy, and then stuffed into a needy '69 Camaro fuselage.

The build started off with a used but not so abused Camaro body, which was brought down to its bones for a fresh rebuild from the ground up. Detroit Speed (DSE) handled the suspension duties, adding front and rear coilovers and a rear QUADRALink suspension. Wilwood brakes supply the stopping power and Forgeline wheels add the bling at the corners. For motorvation, a monster Shafiroff 540 big-block was called in for duty and is backed by a TCI Turbo 400. DSE rack-and-pinion steering keeps this ride pointed in the right direction and the company also supplied the front and rear sway bars for extra handling when needed.

There are plenty of body mods on the exterior, which were covered in a stunning BASF paint. And once again, the crew at CCS have outdone themselves on the interior, bringing in European flavored bucket seats for comfort and a sporty look, and then wrapping the whole cockpit in some soft Relicate leather for a touch of class. Like always, stay tuned for a full feature on this Chevy "Hell Cat" on superchevy.com and in print in the near future.