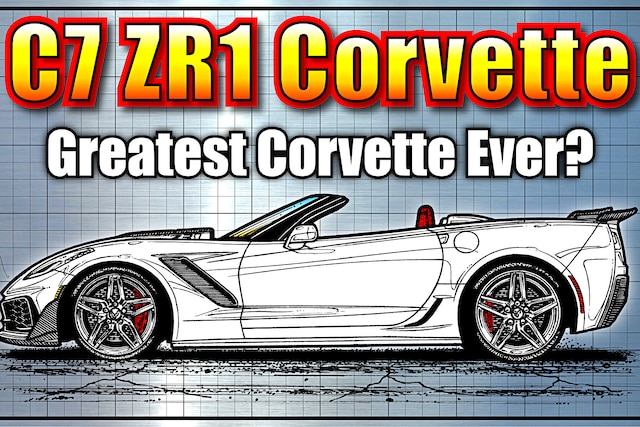 Our title is a loaded question. How do you quantify "Greatest Corvette Ever"? After all, we have 66 years of Corvettes to measure from. Since the Corvette is America's performance car, let's go with performance as a benchmark. And how do we quantity performance? Peppered throughout Corvette history there are shining examples of outstanding performance. For example, in 1988, Reeves Callaway took Sledgehammer, an 898-horsepower twin-turbo L98 1988 Corvette with a Paul Deutschman body kit to the Transportation Research Center in Ohio. There, John Lingenfelter drove the car to a 254.76-mph speed record, and then drove the car back to Callaway's shop in Connecticut. That's performance, but would the car have been able to perform as such over and over? Doubtful.

It wasn't long after the Corvette Racing Team started that work began on the C6 Corvette. Chief engineer Dave Hill worked with Pratt & Miller to make the C6 a better Corvette and to make the C6 Z06 a stunning street/track Corvette. The Corvette Racing Team quickly became Corvette engineering's "racing division" and customers were the beneficiaries. This relationship continued and impacted the design of the C7, the C7 Z06, Grand Sport, ZR1, and the C8. The Pratt & Miller C8.R was seen in testing at Sebring in 2018, so by the time the first race of the 2020 season goes off, the mid-engine C8.R will be ready for competition.

It's a big deal when a Corvette generation ends and a new generation begins. The C6 ended with the 427 convertible, an outstanding Corvette packed with LS7 Z06 power and the Z06 widebody. The C5 ended with the 2004 Commemorative Edition that included a Z06 with a carbon-fiber hood. The C4 closed out with two special editions: the Collector Edition and the Grand Sport, powered by the 330-horsepower LT4. The C3 ended with the Collector Edition that offered a very nice array of options, but no performance advantage. The end of C2 and C1 Corvette generations went uncelebrated. The 2019 C7 ZR1 throws down the gauntlet and says to the C8, "Best this!" So let's look at the C7 ZR1 to see what the C8 has to compete against.

C6 and C7 Corvettes took the car into the realm of "track car" thanks to the success of the Corvette Racing Team. Track performance is the new measure of superiority. The C6 Z06 had more race car built into it than any other previous Corvette. The C7, C7 Z51, and the C7 Z06 were even more so. The C7 ZR1 begins where the C7 Z06 ended. Chief engineer Tadge Juechter explained that when his engineers completed the C7 Z06 they felt that they'd done everything they could to the platform. A year or so later, they came back saying, "We have a few more ideas." The C7 ZR1 is the result of those few more ideas. The final execution of the ZR1 wasn't that complicated. Let's have a look-see.

The best way to understand the C7 ZR1 is, "Z06 Plus." But the ZR1 isn't just a Z06 with an extra 105 horsepower; it is a GT car with serious track potential. The LT5 engine is a variant of the LT4 in the Z06, but with two big differences: first, the Eaton supercharger is 52-percent larger, and second, the LT5 not only has direct injection (same as the base LT1), it also has port injection; with each system using dedicated electronics. The supercharger has larger high-flow, high-efficiency rotors with optimized high-twist, four-lobe rotors. The larger supercharger meant that the entire system sits taller and required a bigger hood dome. The entire hood assembly is carbon-fiber, as are the front fenders. Plus, the throttle body is a larger 95mm unit. The Z06 dry-sump oil system is pressurized with Mobil 1 0W-40W synthetic oil.

To keep everything cool, engineers have used air to the max: for breathing, engine and brake cooling and downforce. There are four paths of airflow on the ZR1: under the car, over the car, around the car and through the car. Four additional radiators were added to the ZR1, including a low-temp radiator and two additional outboard radiators specifically for supercharger cooling. Two more radiators are used for engine cooling, plus lay-down coolers for power steering, differential and transmission.

The ZR1 can be an awesome track car, especially with the $2,995 RPO ZTK Track Performance Package that includes the adjustable high rear wing that adds 950 pounds of downforce. ZTK also includes springs with rates that are 30-percent higher in the front and 13-percent higher in the rear. The Michelin Pilot Sport Cup 2 tires are specifically designed for warm, dry track conditions. Overall, RPO ZTK adds 60-percent more downforce, with the same air drag as the Z06/Z07 package. Also, there's a C7.R-type front underwing, not visible from the exterior; that has the same downforce and efficiency as the rear wing. The ZR1 also has a unique front splitter. The C7 chassis structure needed no additional reinforcements to handle all the extra downforce.

Most of the standard '19 Corvette options are available, plus—unlike previous ZR1s—the C7 ZR1 is available as a coupe or convertible, and with a manual or automatic transmission. The automatic is slightly quicker than the manual. As of this writing (May 26, 2019), the base price of the '19 ZR1 coupe is $121,995 and $126,495 for the convertible. If you go to www.chevrolet.com/performance/corvette-zr1-supercar you can option the ZR1 to over $150,000. While the Z06-based ZR1 isn't strictly a track car, even with the ZTK track option to help its track performance, the ZR1 is perfectly comfortable being an everyday driver, just with a ton of potential. The suspension tuning is the same as a standard C7 coupe and convertible.

Unlike the big-block beasts of the late '60s, several of which were barely streetable, the C7 ZR1 is a beast you can easily live with. The car provides comfortable transportation and astonishing street and track performance. Yes, the price is over double that of the base model coupe ($55,900), but Corvette high performance has never been cheap. Look at the prices of the C4 and C6 ZR1s; nearly double for the C4 ZR-1. And like the C7 ZR1, over double the price for the C6 ZR1. As of this writing (May 26, 2019), only 2,588 '19 ZR1s have been built, making them the rarest of the C4, C6 and C7 ZR1s. Only 53 C3 ZR1s were built, and these were solid-lifter, LT-1-powered cars with L88 suspensions and brakes; not street cars by any measure. The C7 ZR1 will smoke any production Corvette on the track and be happy getting groceries on the way home. That is why the C7 Corvette ZR1 is the greatest Corvette ever. Vette

Illustration by the K. Scott Teeters, Image from GM Archives