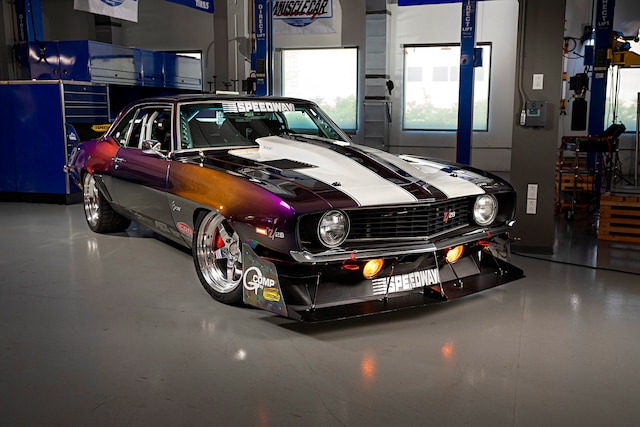 The Pro Touring movement is a sea of late-model engine swaps; carbon fiber; and big, flashy wheels. In many ways, the muscle car element, though present, is heavily masked by sleek technology. That's why Speedway Motors' entry into the 2018 Super Chevy Muscle Car Challenge presented by Falken Tires was so well received. The big-block powered, nitrous-oxide injected, 1,400hp, blunt-force weapon that was their 1969 Camaro, certainly turned heads ... and melted pavement.

"At a very young age, I had an uncle that had a 410 Sprint Car," said Wallace. "That made me want to be involved in motorsports. The cheapest thing to race was a dirt bike, so I bought a dirt bike and started racing. I figured out I was way better at building motors, re-valving shocks, and building suspensions, but I was still pretty good at racing."

About that time, Wallace was being trained to be a machinist, though he kept crewing for powersports and automotive racing teams along the way. "I worked my way up the chain to working for professional teams," he said. "I was a World of Outlaws head mechanic."

A highly proficient machinist, fabricator and more, Wallace eventually landed at Speedway Motors where he manages the machine shop, CNC machines, lasers, and fabrication equipment. "I also handle the race team's needs for fabrication and machining required for projects they are working on," he said.

So where did the idea for the Camaro come from? According to Wallace, he pulled inspiration from the heyday of Trans-Am racing. "I really wanted to build a Trans-Am car. That's sort of where this started," he said. "I was enamored with Z/28 Camaros and that kind of racing." When Wallace came to work for Speedway he helped on all the G-Comp suspension components (what this car uses) and the idea to build his own car, a 1969 Chevrolet Camaro Z/28 clone, was quick to follow.

The end result is a raw and visceral racer, purely mechanical, simple, and fast. "There's no driver's aids of any kind," said Wallace. "It's in line with a real Trans-Am feel.

The Chevrolet history buffs will be quick to point out that no Camaro Z/28 ever came with a big-block engine. But, had the rulebook not capped engine displacement at a miniscule 302 ci, we're certain they would have. Think of Wallace's efforts as a "what-could-have-been" of sorts. How would Chevrolet have built a Trans-Am racer if there were no rulebook? Easy, like this.

Under the hood of the '69 beats an all-aluminum big-block displacing 565 hungry cubes. Zack Woods at the Speedway racing engine shop built the engine, which made 1,050 hp to the tires naturally aspirated and 1,380 hp when the NOS Pro Fogger breathes heavy. A custom Comp cam with over 0.800-inch of lift supplies the rattle and shake from the tailpipes. The big-inch engine revs to a stratospheric 7,500 rpm reliably, though the team has made dyno pulls to 8,000 rpm. A five-stage dry-sump system provides lubrication at those engine speeds, and with the insane grip, an AED Mini Dominator G-3 billet carburetor provides fuel to the big-inch mill.

The front setup includes a fabricated front clip to replace the flimsy OE stamping. It is completely bolt-in and features fabricated upper and lower control arms, modified geometry with increased caster and camber gain, and a steering arm designed for 20 percent quicker steering with increased Ackermann. A splined, adjustable sway bar is used for adjustability and there is even a billet aluminum chassis brace included in the kit. "Even though everything is extremely heavy-duty, the components can be bought by anyone and bolted onto their car," said Wallace.

Out back, the G-Comp suspension utilizes a truck arm design, similar to what current NASCAR teams employ. "It's a great suspension design that's predictable and easy to bring the car back under control when it gets away from you in a corner," said Wallace.

Controlling suspension oscillations, front and rear, is a set of PRO, four-way adjustable coilovers; four-way meaning they have a high- and low-speed adjustment for both compression and rebound. Slowing all the horsepower and speed down is a set of six-piston Wilwood calipers and a Wilwood Tru-Bar reverse swing mount pedals and master cylinders.

How Does it Drive?

You'd expect a 1,400-horsepower car to be too hot to handle, downright terrifying maybe, but according to Wallace, "When everything works right, it's kind of boring," he laughs. "Other times it can be a handful. With 600 lb-ft of torque at 2,200 rpm, it can feel like being behind a rocket."

Built to race, the Camaro competes in autocross, road course racing, open road racing, and standing mile events. "The car is built to take out and abuse and not have to worry about anything," said Wallace.

While David owns the car and drives it regularly in competition, for the Muscle Car Challenge, teammate Ken Thwaits took the wheel and laid down some scorching numbers. More impressive was that Ken had nearly zero seat time in the Camaro prior to the event.

Below, we'll see how the Camaro stacked up at the Muscle Car Challenge.