The world’s going mad for 11/10ths performance. Could the revival of the rational muscle car be its savior? 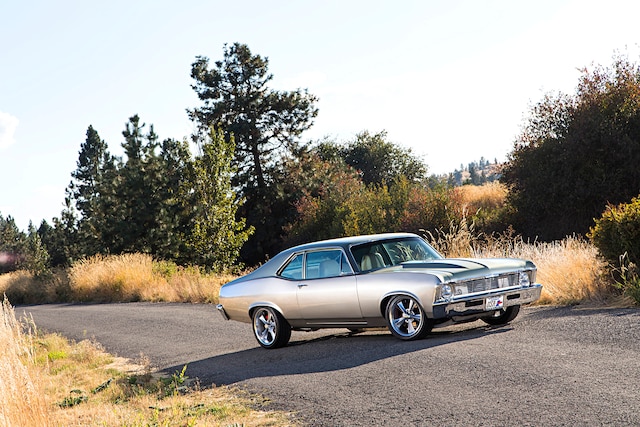 There's a small crisis in our hobby and I'm afraid we're kind of responsible for it.

The crisis is the population of uncomplicated, highly detailed, and straightforward cars that most people can identify with. More specifically, it's the lack of them that's the problem. And by we, I mean all of us in the publishing industry. To our credit, we've done a damn fine job of promoting high-dollar, cutting-edge technology.

The problem is that we've probably done too good of a job. Take a look at any issue of Chevy High Performance in recent history. Restorations notwithstanding, it's almost uncommon to find a car without LS power or a supercharger or even an aftermarket subframe or chassis. You'd swear it'd be too dangerous to drive anything with brakes smaller than about 13 inches just going by their abundance. Judging by looks, it seems you have to spend yourself into oblivion just to play a part in this game.

Thankfully, some people still do what's best by them. When Bill Lynch set out to build a car, the only real criteria he had was to replace the 1955 Chevy he'd recently sold. "I found this Nova body and subframe and decided that would be something different to build," he says.

Actually, this was his first build from the ground up. Bill's just a regular guy in a home garage so he did what seemed reasonable and hired someone to tackle some of the more complicated jobs. And as usual, the project hit a metaphorical wall. "I ran across some subpar bodywork and (it) backed up my project by a year or so."

Though painful, you could call the misstep divine intervention, for it led Bill to craftsman and all-around-nice-guy Dustin Reichel. Together, over the 2 1/2 years that followed, they reversed the wayward work done to the Nova.

The chassis came through elegantly simple. Yes, Bill did dropped springs and knuckles; however, they bolt to the stock subframe and, if you can believe it control arms. Rather than blow a bunch of money on parts that he may or may not even feel, he invested in something he definitely will: rack-and-pinion steering. And truth be told, GM's disc brakes work respectably well even by today's standards, and the drilled-and-slotted versions he installed work just that much better.

In this day and age it seems almost unheard of, but he kept the leaf-sprung 10-bolt (though it rides on lowered springs now). Bill did indulge himself with 11-inch discs back there but largely because drums would've looked a little weak between the spokes of the 18-inch Rocket Booster wheels.

A carbureted 350 may not make LS power; however, at a horse per cube, this Gen I SBC is nothing but fun. The overdrive behind it gives the car the legs it needs to dice it up with modern highway traffic.

That the body remains remarkably unaltered is a testimony to GM's design chops. In fact, the only significant changes are the filled cowl, marker lights, and lock tumblers. The subtle two-tone color split with a contrasting pinstripe distinguishes it.

The dash emerged as the most elaborately modified part of the car. All steel now, it houses round combo gauges. It's not like Bill's going to push the thing hard in the corners so the similar-era Camaro buckets are appropriate. The square-weave carpet and billet half-wrap wheel reference Bill's street rod roots.

So is Bill's Nova the fastest, most competitive machine on asphalt? Well, I'll put it to you this way: It'll win just as many trophies and autocross events as the hyped-up machines found in a majority of the car mags. Which is to say few of those cars get driven to more than a fraction of their potential.

Though milder by comparison, Bill's Nova is far from milquetoast. In all-around performance it'll trounce anything of its era and it'll still hang with all but the nastiest modern muscle cars. But more importantly, it does exactly what Bill wants it to do without false pretenses.

Far be it for us to tell people how to build their cars. But if we did, we'd just tell them to be honest with themselves. It's certainly done Bill Lynch right. CHP