Eleven-year-old buys his dream car and Pro Tours it 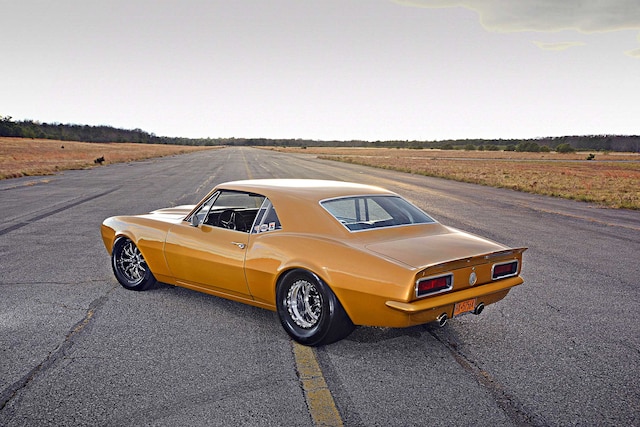 Did you know what you wanted to do with your life when you were 11? I certainly didn't, and can probably say the same for the majority of people out there. But Kenny Luca is one of the lucky few. By the time he was in fifth grade he was already working his way toward his future goals, and picking out the car that would fill his hot rod-driven dreams for years to come.

Growing up, young Kenny was always around his dad, Anthony, while he was building hot rods at their home in Middle Island, New York. The twosome was usually out in the garage all winter long, toiling away in dad's off-season from his day job as a proprietor of a local landscaping company. It was about that time that young Kenny began to lust after Chevy's F-body platform. "It started by hearing stories and looking at pictures of dad's Pro Street first-generation Camaros from the '80s. It really hit me hard," says Kenny.

Soon, the young gun was pining for his own personal Camaro to work on. "Then one day I got a call from my dad. He had found a '67 for sale nearby on the side of a road. He asked me if I wanted it, and, of course, I said yes," admits Kenny. And just like that, the needy first-gen Camaro was coming back to the family garage.

F-Start
For just a couple of Benjamins, father Anthony surgically implanted a smile on young Kenny's face that's been hard to wipe off over the years. But there was work to be done in the garage now, as the car would need an overhaul to get it road ready. Luckily, Kenny was years away from legally driving in New York, which gave the crew plenty of time to get this one out on the streets.

The first thing the father/son team did was collect the parts they needed. Many were found at swap meets, while others were donated from old parts cars and such. Working on it over the next five years, the guys got the car ready to roll by the time Kenny was a senior in high school. Built with a stout stroker 383 and rowed by a six-speed manual transmission, the little pony wreaked havoc out on the streets of central Long Island from the start.

But soon, Kenny realized that this Camaro needed more; more style, more grace, and much more power. Luckily for him, his dad had just recently opened up his first full-service hot rod shop of his own: Anthony's Rod and Custom, located in Middle Island. From the start it's been a shop catering to Chevy lovers looking for both style upgrades and an infusion of power under the hood. So then Kenny made a decision, "After years of building high-end custom cars with my dad, I wanted to build something to the next level. So, in 2015, I decided to completely tear the car down to its shell and start from scratch."

It all started by reducing the car to its sheetmetal. Next, Kenny installed a pair of mini-tubs under the quarters, getting the car ready for the big meats he was going to install out back. A custom four-link suspension, along with a beefy 9-inch rear with an aluminum Strange centersection were then added to the mix. To stiffen up the chassis and handle the future powertrain, frame connectors were installed to tie the unibody together and give it much needed support.

From there, Kenny went to the body. "I started with completely shaving the firewall, door locks, wiper motor cowl, and the driprails. Then from there, my father and I fabricated the one-off, molded-in rear spoiler; one-piece front fenders, and exhaust outlets in the rear valance," says Kenny. It also sports a frenched-in and smothered rear bumper to give the car a clean, flowing look. Once the extensive bodywork was finished, Anthony basted the Camaro in a Spies Hecker by Axalta Amber/Gold Metallic blend, adding ghost stripes under the clear along the way. The car was then wet-sanded and sprayed in clear again, to make the skin as perfect as possible.

How about the "motorvation" of this wild ride? It all starts with a Dart Big M block, which is built up with a 4.250-stroke Callies crank, Manley rods, and 4.600-inch bore JE pistons. This works out to 565 cubes and comes in at 11.3:1 compression. The cylinders are topped with a pair of Dart Pro 1 cylinder heads. Up top, a Hilborn 8-stack injection system—running on E85—helps keep this monster engine fed. Engine management is done by a Holley HP ECU and MSD ignition. Vinny Budano at Shafiroff Racing Engines in Bohemia, New York, tackled the build of this big-block mill. The Shafiroff Ultra Street Edition engine makes over 800 hp and 750 lb-ft of torque, which is nothing to sneeze at, especially in a Pro Touring-style ride.

This killer mill is backed by a custom-built Turbo 400 transmission, running a Gear Vendors overdrive built by Vinny Staria at Staria's Transmissions in Selden, New York. A 3.5-inch exhaust courtesy of Richie Carman from United Exhaust gets rid of the spent gasses in a hurry. This beast is kept cool by a Ron Davis aluminum radiator and is dressed up by a March Performance billet pulley system.

The suspension is dialed in by RideTech airbags at the four corners. Air Ride control arms and sway bars finish off the chassis on this road beast. For extreme stopping power, Wilwood brakes do the trick. Up front has massive 15-inch rotors pinched by six-piston calipers, while the rears come to a stop with four-piston pieces. As for the rims, Weld 15x12 wheels hold the Mickey Thompson ET Street R 325/50R15 rubber out back, and RC Component 17x4 billet wheels are shod in Moroso DS-2 26x5.0/17. It's all held together by Champion billet wheel lugs.

Kenny's lush cockpit was custom-built by John Prentice at Miller Place Auto Upholstery in Miller Place, New York. "This includes custom seats, carpet, door panels, and package tray. This gives the car an updated and classic look," says the owner. Kenny started with a stock back seat that was modified to fit the mini-tubs. Up front, Procar seats (with the headrests removed) were acquired for the Camaro. The seats were then re-covered in black suede with gold inserts to match the exterior. A Flaming River stainless column is topped with a Billet Specialties 14-inch wheel to keep this ride pointed in the right direction. AutoMeter Carbon Fiber gauges keep track of the vitals and a black Hurst shifter, in a customized stock console, rows this monster through the gears. All electronics were mounted on a custom carbon-fiber plate where the original heater box was located. A RideTech stainless rollbar and seatbelts keep it all on the safe side.

F-Bomber
Once finished, Kenny got to put his creation through the paces on the straight, open roads of Eastern Long Island. It did not disappoint one bit. This Camaro is a build that impresses even the most grudging F-body fan, and it's just the start for this talented hot rodder.

But like any young fabricator, he didn't do it alone. "I am grateful for all the help I received from my family and friends. Thanks for all the parts I received as gifts for the last 14 years. I would like to acknowledge with appreciation the Gallina family, Vinny from Shafiroff Racing Engines, Vinny from Staria's Transmission, Richie from United Exhaust, and John Prentice from Miller Place Auto Upholstery. A special thanks to my dad, who provided endless help, expertise, and supported my dream," admits Kenny.

What Kenny's built is a dream car that feels right at home on the local streets, on a long getaway, or even at the track. "The car means everything to me. It's something I've had in my possession since I was a little kid and I've been working on it longer than I can remember. I grew up with the car. It's been like a life-long project that with the help of my dad has taught me everything I know about building cars."

And what about driving this Pro-Tour-de-force Camaro? "The only way I can describe it is like driving around an 800hp light switch. Between the eight individual throttle bodies and the gearing it has the most instantaneous throttle response out of anything I have ever driven." Enough said.