The Boyds build a Biscayne 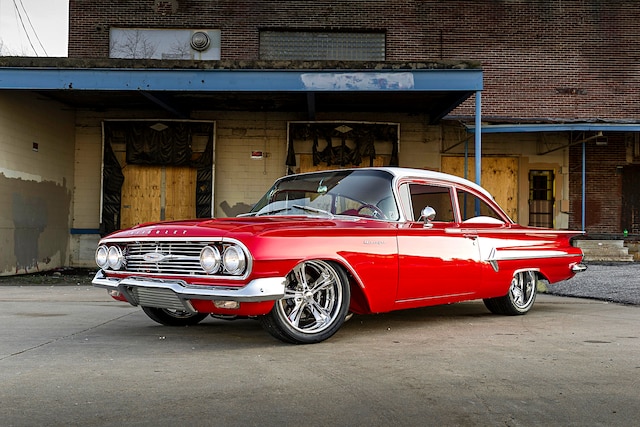 We always get a little excited when we see a car flying out of our youth, especially one that's always been relatively obscure and usually overlooked by most. If you like one of these loads you're probably wired with a subjective personality and happily situated a step or two off the mainstream, like we are.
Ours was a late-build 1960 fixed with a 350-horse 348 garbage truck motor that was strung with three carburetors. Rebuilding that hinky trio in 1962 was a trip though, huh? When we were finished, there were only a few extra bits left over, but who cared? We were playing hot rodder, putting hands on the churl, gaining some sort of stature even if it was in our own cockamamie brain.
Although our Biscuit never got beyond a Hurst conversion for the three-speed, plumber's pipe exhaust cutouts, and gummy Bucrons (yes, they were whitewalls) for the track, it was a low-mileage heap that wore its tuxedo black like a badge, sharp, clean, and crisp.

Yeah, a long time, say 60 years down the pike, way before Joe and Stephanie Boyd were noisily at their baby bottles, all of that has changed. We liked the Biscayne especially for its lack of trim, chrome, and its aspiration to be anything more, that and the fact that you could order the cheapest body with the biggest engine available. The Boyds see theirs as a clean sheet to gently decorate with upscale trim from Bel Air and Impala. Stephanie was the instigator. She was stubborn, no, possessed. She'd seen a '59 Impala at a show and fell in love with the fins and taillights. The search was on.

Why did they build this car? Why, because Stephanie wanted one. She's been into hot rods since she was 15. Joe got in when was he was 13. Joe said, "Steph got involved when her dad purchased a '65 Mustang so she could get me to help—and (laughs) it worked. My first ride was a '54 Dodge truck and then a '65 Mustang."

Joe related, "Little did we know how few and far between [Biscaynes] are and if you did find one it was either rusted out or expensive. At a car show in Ft. Worth we met Dale and Theresa Hilbert who were down from Oklahoma and had the car for sale. It was running and driving, a six-cylinder with a three-speed." The pair started working on it immediately, first changing out the drivetrain for a small-block and an overdrive automatic transmission.
Once the reliable drivetrain was in there, they felt empowered, began pulling on the carcass, stripping the trim from inside and from the exterior and sending it to Whitworx Fine Metal Finishing in Lincoln, Arkansas, for polishing and plating.

"We'd heard good things about Gary Hagar's Hack Shack, Inc., [an acronym for Hagar Auto Classic and Kustom Shack] in Rogers [Arkansas]," Joe recalled. "After talking to Gary, we took it to have it painted. And from there it was all a blur. We went from a paintjob right to a show car. As with any old car, it needed quite a bit of bodywork—new panels. Hack Shack's Matt Bigelow made more than a few by hand." Meanwhile, Stephanie was having upscale visions that were becoming brighter and more defined, and the Impala in her head was kicking hard.

"We added Bel Air trim from Danny Howell at Southeast Chevy Parts (Apopka, Florida) to the sides and around the taillights," said Stephanie. Howell continued to accommodate, gathering the seating stuff and Impala interior and trim. "The rear seat ended up being a real chore," Joe remembered with furrowed brow. "It was a little too plump and plush, so it just didn't snap right into place, but Hack Shack's Mike Jones worked his magical shoe horn act." And that was that. The smoked glass is new and electronically operated. They got the door panels from CARS, Inc., and sourced the carpet from Trim Parts in Lebanon, Ohio.
The Boyds weren't concerned about wheeling 1,000 horsepower or anything like that. They weren't in any damn speed contest so they felt confident driving a nicely detailed Chevrolet Performance 350, especially one equipped with the response offered by FAST EZ EFI sitting on top of it.
Although they profess the Biscayne's show car status and all that implies, they like driving it just as much or they wouldn't have pumped a lot of adjustable Global West hardware between the wheels. They put up some big disc brakes to go with the big rims. Billet Specialties 19- and 20-inch Pinnacle wheels with their 8- and 10.5-inch widths don't shrink; they anchor 245 and 315 Nitto Motivo all-weathers.

Was there anything else? Joe said that maybe they should do a custom interior setting, though the one in there now is quite functional and appealing despite an acre of warm red breathing on you. They finished the job in April 2018, and have found an exclusive way to schmooze, to meet new friends, exchange chili recipes, find out where the best burgers are at, and fib about the brook where the trout bite the best. Like cars have a life of their own.

My heap? It ended badly. There was a little confusion and a lot of noise, but nobody wound up in the emergency room. Let's just leave it at that. CHP