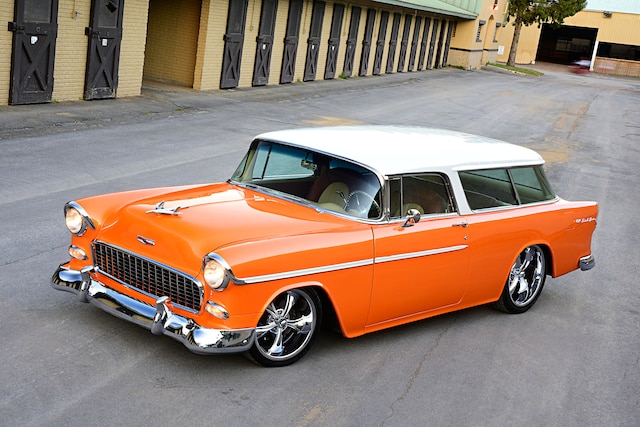 Concept cars have always had a way of generating excitement amongst the public when being presented by auto manufacturers. This held especially true from the '40s to the '60s when the Big Three would present their futuristic concepts at new car shows. There were also the exclusive General Motors Motorama events where one can only imagine the buzz generated on the show floor in 1954 when GM pulled the curtains to unveil their latest concepts revealing their presentation of the "Cars of the Future" exhibit. That year Harley Earl's designers focused on their brilliant concepts of the Chevrolet Corvette, Nomad and Corvair, each one dazzling in its own right. Showcased on the floor of the Waldorf Astoria Hotel in New York, the trio of cars easily captures the public's attention.

It was truly a year for innovation, especially with the Motorama Nomad concept blending the sleek styling of a sports car with that of the combined utility and versatility found in a station wagon. When the concept was brought into production for 1955 it was one of the crown jewels of the Chevrolet lineup packed with innovation, including their all-new small-block V-8. Aside from the Corvette, it was the most expensive offering by Chevrolet that year. The Bel Air Nomad two-door wagon had the exclusivity of being a low production vehicle (only 8,386 for 1955), thus making it easily one of the coolest cars in town to be seen in. For Tom Cochran of New Castle, Delaware, gaining an appreciation for everything automotive started back when he was a youngster watching some of the finest Detroit creations cruise the streets along the Eastern Shores in Maryland. It was then that he fell under the spell of Chevrolet, gaining a particular fascination with factory muscle cars and station wagons, which makes for a pretty interesting combination.

Before long, Tom was knee-deep in the hobby, starting a collection with his favorite ride being a '66 Chevelle SS packing a healthy dose of big-block power. Somehow though, his passion for station wagons still kept him up at night. Having always been a fan of '55 Chevy Nomads with their timeless style and well-balanced design elements he started the search for one. His quest led him to a respectable driver-level offering that seemed to be well put together so a deal was made and the title changed hands. While he enjoyed driving the car it was obvious that he wanted to take it to the next level. Having worked with Gary Corkell and the team at One-Off Rod & Custom in Middletown, Delaware, in the past on other builds it was an easy decision to drop the Nomad off for a full redo. Brainstorming with Gary, the pair outlined a plan to inject a new vibe into the wagon, staring with a full teardown.

Seeing that the original frame was a clean, rock solid base it was perfect for a suspension upgrade to infuse a proper stance and improved handling along with enhanced braking capabilities. Out back, a Ford 9-inch rear was packed with 3.73 gears spinning 31-spline axles from Quick Performance. It's suspended in place by a custom four-link by One-Off combined with RideTech coilover shocks and a custom Panhard bar. To get the nose to the pavement, a Heidt's IFS was installed, including their exclusive tubular control arms deftly matched to 2-inch dropped spindles and RideTech coilover shocks. When it's time to drop anchor, a GM dual power master pushes fluid through steel lines to matching 12-inch vented rotors and calipers at each corner. Linking it all to the street you'll find a set of sparkling 19-inch front and 20-inch rear Ridler Model 695 five-spokes wheels capped with low-profile Michelin Pilot Sport rubber.

There's nothing like dependable power and to make sure the Nomad had plenty of it a 1994 GM 350ci LT1 V-8 gets the job done. Starting with a cast-iron block with four-bolt mains it's filled with a stock cast-iron crank linked to matching powdered rods wearing hypereutectic pistons getting a bump from a factory stick. Aluminum heads generate plenty of seamless power, especially when matched to sequential port fuel injection. A factory ignition lights the fire while a custom 2 1/2-inch stainless exhaust with Flowmaster 40-Series mufflers setting the tone. There's also a neat custom air cleaner by One-Off that adds just the right amount of class to the engine bay. The goods move through a warmed over GM 700-R4 trans to a custom driveshaft to spin the wheels.

When it came time to addressing the body, the One-Off team stripped it bare while first addressing any minor repairs needed. Since the Nomad has the look of a mild custom straight from the factory it didn't need much in the way of customization. The team shaved the driprails and crafted custom trim moldings for the door area. The vintage sheetmetal was then metal finished and gapped by team member Greg Parker to prepare it for paint. Wanting to give the wagon a signature look, Gary custom blended a stunning combination of BASF Tangelo and White pearl and laid down a perfect coating to bring the project to life. Added allure comes from mile-deep chrome bumpers and accents thanks to Advanced Plating in Nashville, Tennessee.

For just the right personality inside, the factory dash was smoothed and filled with dials from Classic Instruments to monitor the vitals while a GM tilt-column with shifter cradles a steering wheel from Billet Specialties to carve a course. JL Audio componntss installed by team member Jared Schmidt lays down the tunes while perfect temps inside are compliments of Vintage Air. To bring all the comforts for the long haul, Brad Wurtzbacher of York, Pennsylvania, stitched up a winning combination. Starting with a set of reworked Chevy Tahoe seats he covered them with yards of soft leather in a classic contemporary pattern while also crafting the complementing side panels, headliner, console, and dash top. Tan plush carpet completes the look and seals the deal. This is one seductive Nomad rolling out of One-Off Rod & Custom that will sure see plenty of miles with Tom at the wheel, and to us that's the real deal!