Steve Wagner’s 1969 Camaro was saved from the crusher 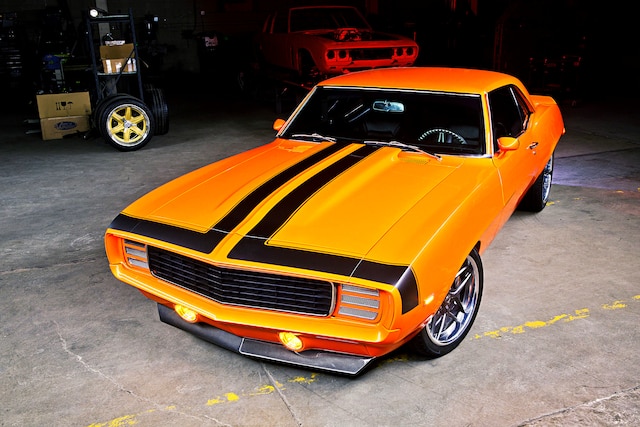 Do you remember your first car? Of course you do. Those of us that have a few years under our belts and have owned a number of vehicles will always look back at the first one as a marker in time. For many, it brings up stories of the one that got away, or the one that should never have been sold. While the overwhelming majority of individuals can only look back on their first ride as a distant memory, there's a fortunate minority who can boast about still owning their first set of wheels. Steve Wagner falls into the latter category. He recalls, "In 1983, I was 13 years old and I went with my father to do a favor for a family friend and haul an old car from behind his business to the junkyard." As you can probably guess, that old car was the remnants of a 1969 Camaro that had been sitting in the weeds for a decade. Those 10 years were not kind to the poor first-gen as the entire front end, engine, and wheels had been stolen or scavenged. The quarters were rusted and weeds had taken up residence through the floors. On the plus side, the dark-green interior, dash, console, glass, and rearend were still intact.

The optimism of youth kicked in when he set eyes on the car. As he points out, "I felt this Camaro deserved better than the junkyard so I convinced my father, Andy, that we should keep the car and I would make it my project since I would be able to drive soon."

The Camaro was given a second lease on life, and for the next four years occupied Steve's afterschool and weekend hours. It eventually grew into a father and son project. As a teen working at a diner as a busboy and at a motorcycle shop, the budget was very limited, and much of the work done on the car reflected that limited cash flow. "We patched the floor panels and replaced the quarter-panels as best as we could," he explains. "We also modified a fiberglass flip front end to replace the costly sheetmetal and built a 400ci small-block and a Turbo 350 transmission."

By the time he was 17, the Camaro had blossomed into a "show car and cruiser" that Steve was very proud of. It was his most prized possession. They would take the car to local shows and cruise nights.

When adulthood came knocking on the door, Steve notes, "Over the next 25 years—after high school—the Camaro, unfortunately, sat dormant and neglected in my parents' barn as I pursued my dream of becoming a doctor." That journey saw him go through college, medical school, internship, residency, and fellowship as the foundation for a successful practice in interventional radiology. Dr. Steven Wagner had come a long way and had also started a family.

With the passing of his parents, it brought to light the need to make a decision as to what to do with the car. He wasn't sure if he was up to the challenge of redoing it again. He thought about selling it. After sitting for all those years it had rusted again and mechanically deteriorated. Mice had chewed through the wiring and squirrels had taken up residence in the interior. He points out, "It was my wife and three children that reminded me of the sentimental value of the car as it had become a member of the family, and something my wife, Jennifer, and my kids Mitchell, Jacqueline, and Reed looked forward to seeing in the barn at my parents' house."

With that encouragement, he took the car home to once again start wrenching on it. Taking a page from his past, his kids helped him tear the Camaro down for its rebirth. He explains, "I soon realized that the work that I did when I was 13 was good at the time but had much room for refinement." Having developed a passion for road racing, the upgrades he envisioned would keep the classic feel intact but add a modern drivetrain, brakes, and suspension.

He searched for a local shop that could tackle the job. Eventually he was led to Justin Brunner and the crew at Bent Metal Customs in Lansdale, Pennsylvania. After they mediablasted the shell, it was apparent the car was in need of extensive metalwork. When they were done, the exterior had received all new sheetmetal, which was then gapped to perfection. In terms of propulsion, Steve knew the Camaro would need some LS power, so he ordered up a Schwartz Performance GM LS3 376/495hp crate engine and a Chevrolet Performance 4L70E transmission. The handling side was complemented with the installation of a complete Detroit Speed Inc. hydroformed subframe up front and their QUADRALink setup out back, which also included a Moser Engineering rearend. Stopping is an all Baer Brakes affair with their master cylinder and 14-inch discs with six-piston calipers at all four corners. Billet Specialties Hydro 18-inch and 19-inch wheels, painted metallic gray and wrapped in Hankook rubber complement all that hardware.

As the project moved forward, the overall direction was continuously honed and refined. With all the body lines razor-sharp, laying down some color was next on the list for Brandon Good, the guy behind the paint gun at Bent Metal. Steve claims that "the family decided on the paint colors to pay homage to the iconic 1969 Hugger Orange but with a House of Kolor Tangelo Pearl and charcoal gray stripes to complement the wheels." Once the body was wrapped up, it was sent off to Gillin Custom Design in Middletown, New York, for the stitchwork. Their contribution involved the installation of a leather and suede interior fashioned around Procar Elite seats.

At the end of the three-year build, Steve ended up with a Camaro to be proud of. He notes, "This Camaro combines the perfect classic proportions and modern features that will be a family legacy for generations to come. It's family friendly and comfortable for a run to a burger joint, car show, and especially a track day." CHP

Upholstery: Leather and suede with leather and carbon-fiber door panels