Mahogany Works of Art Are Body Dies for the 1953 Corvettes

Wood Bodies to Die For 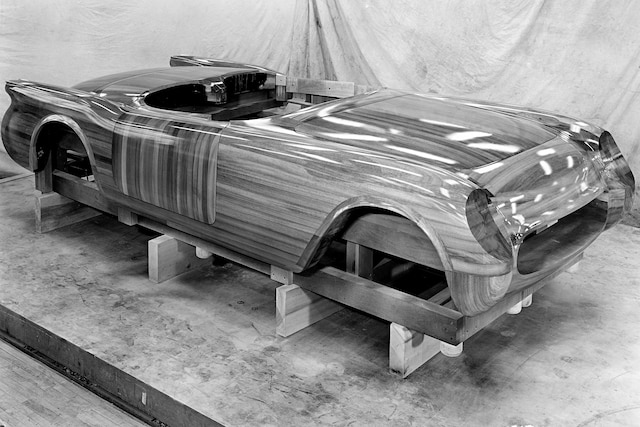 If there weren't photos of men standing by these wooden creations to provide a sense of their size, they would almost look like scale-model tributes to the earliest Corvettes. But these mahogany body dies were, in fact, critical to the production of the first Corvettes ever made.

In the days before computer-aided design and 3D printers, design engineers used various media to render the shapes of cars, as well as the components used to make them. Prototype designs were often made from clay, in either scale or fullsize versions, as it was an easy material to alter as a car's components went through their mock-up and approval processes. From a finished fullsize clay model, a plaster mold could be made to create a prototype body made from plaster that, after painting and adding trim, would look like a production car.

Or in some cases, wooden molds, also called body bucks, would be made in the car's shape, and either sheet steel or aluminum was hammered over the buck to create body panels.

These wooden Corvette body pieces were different. They were made by GM's Parts Fabrication department in late 1952 or early 1953 after the GM brass had approved a two-seat sports car proposal that was then code-named Opel. Carved from solid Philippine mahogany in the exact shape of the car's component parts, they were initially used in the fabrication of prototype body parts, but later served to create parts for the first production Corvettes.

The mahogany dies were used to make semi-permanent tooling, from which the Corvette's body components would be laid up in fiberglass. The process to create that tooling is described in depth in the first volume in Noland Adams' thoroughly researched Corvette: American Legend series of books (published in 1996 by Amos Press Inc. and available from Amazon): "First, the mahogany die model was protected by layers of wax and mold release. Then a mold was taken directly off the die model; it was a mirror reflection of the die model, if that makes it easier to visualize.

"The finished fiberglass part was to be one layer of cloth, an inner layer of mat, and an outer layer of cloth, a total thickness of .100 inch (1/10 inch). The next step was to lay sheet wax, 1/10 inch thick, over the secondary, mirror-imaged mold of the mahogany die model. A blowtorch was used to melt the wax into tight corners and to follow hollows and curves. Then the epoxy lay-up mold was fabricated over the wax on the die (secondary) mold. The resulting mold was identical in size to the mahogany die model except it was 1/10 of an inch smaller all over. When the layers of cloth, then mat, and finally cloth were laid in the mold, soaked with resin, and the air was squeezed out, the resulting part was the exact size of the mahogany die model."

The photos that show a complete Corvette body have several die models assembled together to give a sense of the entire car. When the molds were fabricated, the die models were separated into their individual components: the underbody, front and rear upper sections, dashboard, and so on.

Beautiful as they are, these die models no longer exist. They, like other die models for other cars, were broken up and scrapped, no longer useful once a car went out of production. Vette