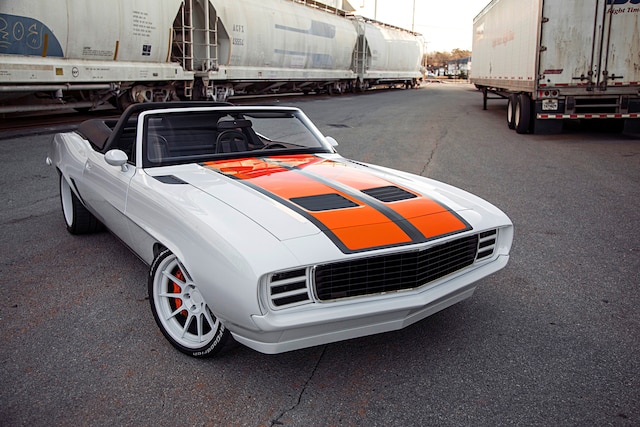 Here at Super Chevy, many of the cars we feature are what we'd call the second coming for their owners. Often we hear something like "I had one of these in high school," or "my uncle owned one and that car shaped my youth," or some similar refrain. It doesn't matter whether it's a full-on show car like this '69 Camaro masterpiece owned by Craig Hardee or a car that's driven and used on a regular basis, we almost always hear a similar sentiment during interviews.

In the case of Hardee's killer Camaro, the story starts in high school. "My first car, at the age of 15, was a 1969 Camaro. It was a hardtop because it was all I could afford at the time and I kept that car for 15 years. I finally sold it after the birth of my third child, for obvious financial reasons and that it was taking up too much room in the garage," he says.

But the burning fire never went away and when he was finally in a financial position to return a '69 Camaro to his garage, this car was chosen to complete the boomerang's path.

During the time he was longing for the Camaro's revival he remained a car guy. Over the years he owned vehicles as diverse as a Shelby GT500 Mustang convertible and a new-gen 2015 Camaro, which he raced in the Optima Challenge series for several years. As a '69 Camaro convertible was at the top of his wish list, he had the motivation to build the best Camaro possible without limitation.

"I always wanted a convertible, so the motivation was to build the best 1969 Camaro convertible I could. I still remember the YearOne Camaro and loved the rollbar, but even though I am a Camaro fan I fell in love with the look of the Shelby. So I married features from my Shelby GT500 convertible and my 2015 Z/28," explains Hardee.

"The car was originally purchased by me in 2013 to turn into a weekend driver that could be restored back to its original beauty, but I wanted a suspension that would hold up to today's roads and to my tastes, and I chose DSE," he says.

But let's not get ahead of ourselves; there's more to the story. "The condition appeared better than it was for $40,000. Once sandblasted, the true condition of the car became apparent that it was best to rebuild most of the bones, especially since it was going to be raced in the Optima series."

Although the original plan was for this car to be used in competition, plans change, and with them goals change.

"I had the car for two years before sending it to DSE. Originally it was for a complete DSE front subframe and rear QUADRALink, but after I saw their capabilities and some of their other builds, it turned into a complete restoration plus custom body panels and modifications that had never been done before," he says.

As the DSE team began to restore the car, Hardee hired a designer to help change and customize several items on the car to make it more like his race car, the 2015 Camaro Z/28. He was so enamored with the custom work that the fabricators at Detroit Speed & Engineering performed that Hardee shelved the race car plans and made the decision to go all-out on the show car configuration, as he realized that he'd be far happier without worrying that the car would be damaged by an accident on the race course.

After the design, Ben Hermance worked his magic with the vision of how those customizations should be applied and the DSE team surged into action. By turning the Camaro into a leather and steel interpretation of Hermance's and Hardee's perception of the perfect Camaro, they have developed a truly unique piece that was selected for the Battle of the Builders competition at SEMA in 2018.

From the slick trimless windshield to the shaved emblems to the super-sano spotless interior, this car just screams awesome.

Under the hood is a 7.0-liter LS7 engine machined and assembled by Pro-Motor Engines in Mooresville, North Carolina. It's filled with ARP hardware and a Brian Tooley Racing camshaft package, and has a FAST intake manifold up top. The 500-plus-horsepower LS7 pushes the combusted gases out through a set of Detroit Speed & Engineering custom 1 7/8-inch headers and 3-inch 304 stainless steel exhaust, and the sound is glorious and raucous with the BTR cam chopping away.

The detail paid attention to this project is down to the smallest touches; even the visible ARP hardware has been treated to a Cerakote to provide a non-shiny finish. Also, the Detroit Speed coil packs have been hidden from view and the firewall has been cleaned up to give it a classic look. Vintage Air's Front Runner HVAC system and Billet Specialties hood hinges complete the underhood appearance.

The rest of the driveline consists of a Bowler Performance Transmissions-modified T-56 transmission, Centerforce DYAD twin-disc clutch assembly, Quick Time bellhousing, and Dynotech Engineering driveshaft, all of which feed the power into a GearFX-assembled 9-inch Ford housing with a 3.89 gearset and Eaton Truetrac differential.

The aforementioned Detroit Speed front subframe assembly and QUADRALink in the rear include JRi double-adjustable shocks, with each end supported with Baer 6R braking systems.

One of the most notable aspects of this build is the killer interior, which has been executed to perfection by Wayne and Pam McGriff of M&M Hot Rod Interiors of Holly Pond, Alabama.

"The hardest part of the vision was the interior, so we gave somewhat free rein to M&M. They nailed the interior and the transitions from the custom NASCAR seats to the Shelby-style rollbar, and then DSE tied the top into the interior with a custom tonneau cover," says Hardee.

The seats are custom pieces from The Joie of Seating and are covered in black leather, as is the rest of the interior. Speedhut gauges and a Billet Specialties Formula 14 steering wheel feed the engine's vitals and road feel to the driver. Killer tunes on-demand are provided via the Detroit Speed-installed Rockford Fosgate digital media receiver, Focal K2 front and rear speakers, a pair of Focal amps, and Focal subwoofers.

The car rolls on a set of—what else, but custom—18x10 front and 18x12 Forgeline Rebel Heritage series wheels, which are covered in body-color PPG white paint with a custom stripe and wrapped in BFGoodrich Rival S tires measuring 275/35R18 in the front and 335/30R18 in the rear.

The hood is a custom unit manufactured by Detroit Speed, and DSE employees Michael Neighbors and Austin Moore were tasked with ensuring all of the body panels were straight and true. Once the body panels were perfect—including the custom door handles, which Hardee says are "to die for"—Neighbors tuned them up with the PPG white pigment, then applied the one-of-a-kind custom stripes to finish off the car's exterior appearance.

Finally, the car was complete and ready for the show circuit, where it debuted in the DSE booth at SEMA in 2018. It was selected to compete in the Battle of the Builders, and although it did not make the cut of the final three cars in the competition, the experience provided Craig with memories of a lifetime. He says one of the most memorable experiences of the build was working with the people at Detroit Speed & Engineering. "They are artisans at what they do, and the professionalism is second to none," sums up Hardee.

Ultimately, the four-year-plus build has given the world a truly custom Camaro convertible, which displays some of the nicest craftsmanship around. And in the process, given Craig Hardee the Camaro he wanted, with the Mustang lineage.