Andy Lezotte’s ’69 Chevelle is built to be immortal 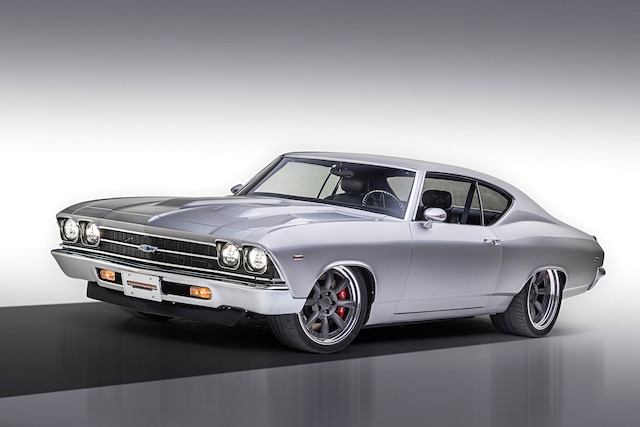 So you've read the title and looked at the lead photo of Andy Lezotte's Chevelle, and now you're wondering what the heck a Chevelle and a Ferrari have in common. Or why we'd mention a Ferrari here in the pages of Super Chevy. Well, as it turns out, Andy is a car guy's car guy and has a deep affinity for all types of performance cars. So when it came time to let out his inner child, he had a choice to make.

"I really wanted a Ferrari. I was kind of shopping and I came to the realization that if I went out to dinner with my wife and there was a brand-new 488 and a regular old basic $25,000 Chevelle right behind it, I'd be looking at the Chevelle. I'd get tired of a Ferrari or Lamborghini. There's nothing that special about those cars, aside from the fact that there's a horse or a bull on them," he says.

So he realized that he had a choice to make: dive into the world of the prancing horse and add a Ferrari 488 to his stable, or take the road less traveled and build the stunning, completely custom '69 Chevelle you see here. It's obvious which one took place—the world has one less Ferrari owner.

But the real story starts years before, back when Andy was in high school. He had grand dreams of buying a Honda Civic for his first car; that is, until a friend came over and changed his life forever. "I had to buy my own car, and I was going to buy a Honda Civic ... until my buddy comes over in his '68 Camaro. He's taking me up and down the road and I just felt it in my bones. I'd always loved muscle cars, but I didn't think my parents would let me buy one. But I just knew I had to get something like this," he says.

A quick trip to pick up an Auto Trader—pre-World Wide Web days—and he had his target: a Cortez Silver '69 Chevelle, which became his for the princely sum of $6,200. He didn't think twice. He just went and bought that car, although it is not the same car you see here. In fact, he's contacted the current owner several times to try to reacquire the original car that stoked his muscle car flames, but the owner simply won't part with it.

Since it wasn't possible to start with the car that had led him down the path to muscle car glory, he did the next best thing. He contacted Rodger Lee of Ironworks Speed & Kustom, and contracted him to develop this eye-popping piece of machinery.

One of the reasons he chose Rodger's team was that the two share a philosophy. Although there is a laundry list of subtle changes to the Chevelle's exterior, they were all made with the intention of retaining the car's silhouette.

"There are a lot of great builders out there," Andy says. "But what Rodger does is build something timeless and classic. Ten years from now, you won't know if that car was built in 2029 or 2019. There's such a beautiful style to it, and it's really a piece of art. People can't conceptualize or visualize what it takes to build one of these cars—there are about 4,000 hours into the car. That hood doesn't exist. Those bumpers don't exist. The spoilers don't exist."

"We want to build cars that we can be proud of. We have a pretty high standard, and take pride in our work. Andy came to me looking for a Chevelle after seeing one of our other projects, and I happened to have a '69 Chevelle in storage. We have pretty similar tastes. He wanted a car that was older than his generation, but he didn't want to go crazy and do outlandish things. There's a lot done to the car, but there's not a lot done to the car. That's what our style has always been; just making cars that look really good," Lee adds.

One area where Lee and the Ironworks Speed & Kustom team didn't try to reinvent the wheel was with the selection of the powerplant. Rather than invest gobs of time and effort to build a custom engine—and be concerned about the potential struggles involved with doing so—he and Andy made the decision to select a supercharged crate engine: the LSA from GM Performance Parts. As configured, the engine makes 700 horsepower and is always ready to rip when Andy's looking for performance. Ironworks designed a set of billet valve covers to finish off the engine's appearance to go with the Wagner front drive system, the Ultimate headers, and the Ironworks stainless exhaust system. The engine is backed up by what we'd say is the traditional transmission for a Pro Tourer: the TREMEC Magnum.

Lee has worked extensively with the chassis products offered by Speedtech Performance, and when it came time to set the underpinnings for Andy's Chevelle, he looked at the complete setup from the company to provide the performance requested by Andy and the quality required to match up with the rest of the build plan.

The top-shelf ExtReme chassis features all of Speedtech's latest-and-greatest pieces. From the enhanced-geometry upper and lower front control arms to the forged aluminum spindles and C7 hubs up front, to the single-adjustable RideTech coilover shocks and torque arm rear suspension, this chassis is light years ahead of the original Chevelle frame.

Monster Wilwood 15-inch-diameter rotors and six-piston calipers provide stopping capabilities rivaling that of any of today's super cars. A Dutchman 9-inch Ford housing filled with an Eaton Truetrac differential and 4.11 gears motivate the Chevelle when the loud pedal is mashed to the floor. But no car of this caliber is complete without the perfect set of wheels, right? Forgeline Laguna wheels wear 305/30R19 front and 345/30R20 rear Michelin Pilot Sport 2 tires, which provide seriously impressive grip with the help of the Speedtech chassis' handling capabilities.

With the car's appearance a large part of the build process, Lee and his team worked overtime to develop a finished product that met Andy's goals. A custom front bumper, hood blisters, and lower front valance provide an assertive countenance. Many man-hours went into completing these portions of the build, with the end goal of clean, understated modifications.

"We widebodied the car two inches per side. It takes the car that's flat on the sides and gives it some hips, and makes the thing look really aggressive. All these little things really do change the car. That's always been our style, trying to improve what was there," says Lee.

Andy also wanted a rear spoiler, so Ironworks fashioned one of those to satisfy his desires, then designed custom, one-off 3D-printed side mirrors, which incorporate the turn signal indicators on the outside shell. Sherm's Chrome and Pacific Coast Powder Coating combined to perfect the presence of the chrome and powdercoated pieces.

During the entire build process, Andy was anxious to know how the car would drive, peppering Rodger with questions about its capabilities, and hoping it would be comparable to his 2013 Ford Mustang Shelby GT500, which had been his favorite car to date.

"The car drives like nothing I could have ever imagined. It's like driving a Porsche 911 GT3 or 458; going around these crappy city streets, it's comfortable as heck, but it's also comfortable going 110 mph. It's a badass driver and is everything I could have ever imagined. It was kind of like if Don Yenko was alive, what would he approve of as a Yenko Chevelle today? And I feel like Rodger nailed it," says Andy.

Since Andy took delivery, he's put 1,000 miles on the car, both cruising it around and dropping the kids off at school. Exactly what a SEMA car should offer—the best of both worlds.