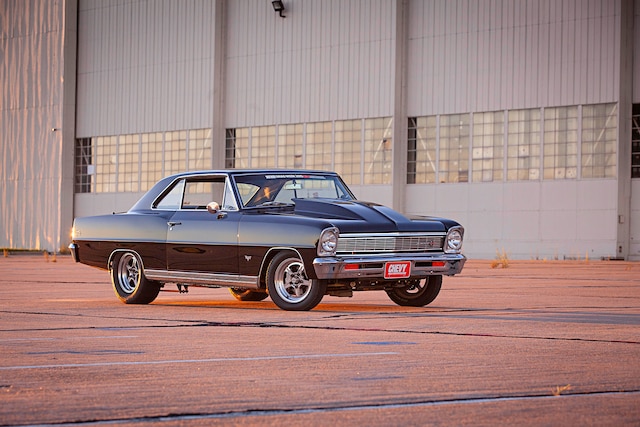 Hot rods have the unique power to transport us to a different time. For some, maybe as vividly as The Beatles, bell-bottoms, or even a first kiss. For others, crawling behind the wheel of an old car can instantly take us back to a simpler time. For those of us who idealize a time of optimism, a classic American muscle car is no better monument.

Corey Petska's 1966 Nova SS is a throwback to a time when American cars reflected the collective hopes of the American Dream. It was a simple time, one that almost everyone could afford. After a decade of tailfins and tri-tone paint schemes had faded, the Chevy II was at the heart of the compact horsepower era.

OK, sure, an all-out, back-halved Pro Street monster could've been tempting, but Corey kept his racing spirit somewhat at bay here. "I grew up standing at the solvent tank washing parts for my dad," Corey begins. After taking home his first high school class drag championship in the '90s, the passion naturally grew legs from there. In his heyday, Corey was no stranger to big crowd-cheering wheelstands ending with 9-second slips in hand. "I love race cars I wanted to keep this car driveable, but fast. I didn't want to ruin the car," Corey says.

Down the road a few years, he found himself a regular at the nearby dragstrip in Scribner, Nebraska. That was, until the track shut down in 2005. He ended that season with a track championship in a heads-up class with his 1970 Nova. "In a way, I guess you could say I might have never built this car if it wasn't for Scribner closing," Corey remembers. Scribner (Nebraska Motorplex) was an old repurposed airstrip that held several regional and national level NHRA and IHRA championship races beginning in the 1950s. It was the hot rod sanctuary for locals. After closing, the next closest quarter-mile track was about a four-hour round trip drive for Corey, which meant weekends wouldn't be as affordable. Almost immediately, his drag-ready '70 Nova found a new owner about 1,500 miles west in Southern California.

A couple of years pass, all the while Corey uses his best efforts to locate a car he'd dreamt of owning since he was a kid: a 1966-'67 Chevy II. His patience scored him a solid '66 Nova SS out of Council Bluffs, Iowa. Priced at $7,000, he got a shell disassembled with no engine or transmission. He aimed to build it like every hot rod should be: out of boxes. After seven years, plenty of mediablasting, a little patchwork in the trunk, it was ready for a fresh coat of Tuxedo Black paint and a new powerplant.

The car was originally finished with a 302/TH350 combo. Anyone familiar with the legendary Chevy small-block 302—all hail the first-gen Camaro—knows all about the high-revving power of a DZ engine. And built at 12.5:1, high-octane mills are loads of fun, but they come at a price, too. So, version 2.0 received a stout LQ9 block bolted to a 200-4R trans. The local go-to guy, Jon Wischman, completed the machine work and assembly. They bolted on a set of L92 aluminum heads, which take orders from a custom hydraulic cam. A chrome air cleaner and Chevrolet Performance valve covers finish off the vintage muscle look of the engine. "When the car was finished, I really wanted people to look at it and think muscle," Corey said.

The freshened up 6.0L put down 430 horsepower at the wheels, good enough for consistent 11-second passes on pump gas. "It's best time was 11.42 at 118 mph. That's about as fast as you can go legally without a rollcage and I wasn't putting a rollcage in it," Corey says. It's also durable, having survived two grueling Hot Rod Drag Week tours, 2014 and 2015.

With the exception of laying down the paint, done by Art Reddish, everything else was finished by Corey in his garage. McVickers in Lincoln, Nebraska, reupholstered the stock interior with black vinyl. With a mean stance, it sits on a set of Billet Specialties Street Lite 15-inch wheels. The Mickey Thompson drag radials do their job especially after you heat them up. All four corners are outfitted with Aerospace calipers clamped on to drilled rotors.

These days, in a time when 15-inch wheels aren't necessarily the go-to choice, Corey's Nova exemplifies the soul of muscle. It's a perfect storm. Its heart beats with modern, reliable performance and it vibrates with a street machine attitude. Done with purpose and done passionately, it's clean, it's simple, and it will take you right back to the good ol' days—a simpler time. It's a dream come true for Corey. What more could you ask for? CHP

Paint By: Art Reddish, State of the Art Body and Paint