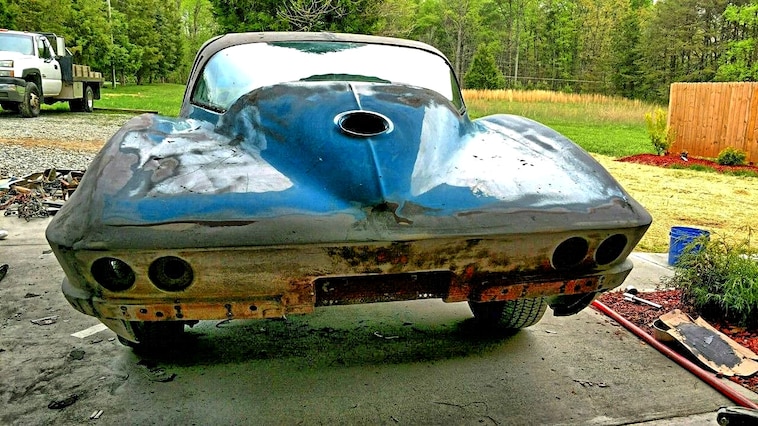 In a perfect world, Rick Trumble would have found his mom's old Corvette. He still did.

"When I grew up my mom had a 1965 coupe, silver with red interior. I loved that car. I used to go outside in the middle of winter and sit in that stupid car, just to sit in it. It was like a spaceship."

Trumble was the right age for car dreaming, 14. The rest of us, adults though we may be, find ourselves, in times of retrospect, sitting behind the wheel of our dream Corvette, real or imagined, wondering, like Rick, "Who could build a car this neat?"

Trumble knew the chances of finding his mom's actual Corvette were slim to none. Approaching 60, time was slip sliding away, so he bought essentially a shell to build into the modified he always wanted the 1965 to be.

The 1965 coupe he found in North Carolina was last tagged in 1992, was "about three different colors," had been "beat to death," floorboards "broken out" and firewall "all cracked."

The truth is, his mom, Jean, bought her 1965 coupe used, a 327 with four-speed, and drove it daily. She also owned a '64 Corvette convertible to drag race. Rick graduated high school in 1976.

"I did everything but the paint; C5 suspension, all the driveline brand-new, 525-horse LS3, TREMEC four-speed manual, 3.90 rearend, all modern conveniences inside, including Vintage Air, Bluetooth stereo."

Jean knew of her son's fascination with the 1965. He learned to drive a stick in this car, motoring up and down the driveway before he had a license.

She willed the car to Rick. But the family had to sell the 1965 coupe to help pay her medical bills. When his mom passed away in 2001, Rick knew he had to get another 1965 coupe.

Restored cars were "out of my price range," but no matter, his 1965 would be a modified. There was no need for matching numbers or a trim tag with the silver/red codes. Rick was building his own personal modified with certain stipulations.

"What would your mom think?" we asked.

"She'd love it. She'd go nuts. I've love to see the look on her face if she could see this car," Rick said.

"Everything about it is like turning back the clock 50 years; absolutely like stepping into a time capsule," Rick said.

Rick did get back Mom's old Corvette. The VIN did not matter to him. Vette

The 1965 had no engine or transmission.

Rick dragged the car to his shop on a trailer.

Rick took the body off the frame and started his dream build, which included major fiberglass work.

Rick would have modified his mom's 1965, same as this one.

The interior retains the stock dual cockpit, but with much improved seats and an aftermarket steering wheel.

Rick's build is not a daily driver, but he will drive it "here and there."