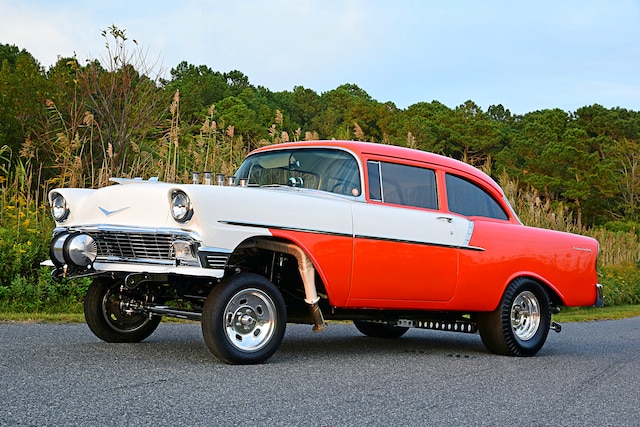 Nothing leaves a longer-lasting impression on a young person's mind than being in the pits at a nationally sanctioned drag race at the age of five. The fusion of adrenaline and the scent of nitro is more than enough to propel you into the stratosphere as you watch pie-eyed from the front row. For Preston Carden Jr., of New Castle, Delaware, the scene was quite real since his dad, Preston Sr., was a seasoned drag racer who regularly competed at nearby Cecil County Dragway in Rising Sun, Maryland, as well as Maple Grove Dragway in Pennsylvania.

Growing up in a hot rod family gave the younger Preston the opportunity from an early age to spend plenty of time in the garage alongside his dad, watching him fabricate and wrench on hop-ups, muscle cars, and drag cars. Continued time spent at the racetrack gave Preston an appreciation for what it took to be competitive. He focused especially on the gassers with their wild, mile-high stances and injected V-8s as they left the line, watching reaction times and listening to their shifts. When his dad finally started building a 1937 Chevy to bracket race, school was in session as he was finally able to lend a hand during construction.

As the years passed, Preston got deep into the hobby starting with a 1967 Camaro SS/RS (which he still owns) as well as a big-block-powered 1966 Impala and a 1966 Nova. He would also regularly bracket race along with his dad and continue to take on new builds. The exhilaration of watching gassers run at the track still sparked his magneto, leading him to take on his very own project. Having always been a fan of 1956 Chevys, he began a search for a suitable base to start the project. The most important factor was to begin with a nice solid car, eliminating any need for extensive repair and metal fabrication. A family friend led him to a recently discovered barn find in Pennsylvania that had been sitting dormant for the past 30 years—a low-mile original with immaculate sheetmetal and the factory spare still in the trunk. A deal was made and Preston hauled the car home to get started.

Having built the gasser in his mind countless times since his youth, Preston knew the exact path to take with it. The car was disassembled, the frame was blasted clean, and brought to Iron Hill Hot Rods in Newark, Delaware, for Ellis Simmons to work his magic. Starting out back, a 1962 Oldsmobile rear was narrowed 4 inches and packed with Strange Engineering 31-spline axles spinning 4.11:1 gears. It's suspended in place by a set of custom-fabbed 48-inch ladder bars matched to leaf springs from Classic Industries and adjustable drag shocks from Competition Engineering. To get the ultimate stance up front, a Speedway Motors Gasser Kit sets the pace, complete with their exclusive straight-axle, Ford-style spindles, semi-elliptical springs, and adjustable drag shocks from Competition Engineering. When it's time to toss the anchor, a dual master from Wilwood moves fluid through steel lines to matching 11-inch discs with four-piston calipers mounted at each corner. A set of stylish 15x4 front and 15x8 rear billet Gasser II wheels from Circle Racing are capped with Firestone rubber from Coker.

In making the decision for a nasty V-8, Preston reached deep into the memories and decided to pack the 'rails with an injected small-block Chevy. He contacted Long Engine Works of Elkton, Maryland, to build a fire-breather starting with a Dart SHP iron block, which was massaged to 421 cubic inches. They followed by packing it with a speed shop full of go-fast goods, including a Liberty Performance Components 4340 forged steel crank linked to Callies Compstar forged 4340 steel H-beam rods capped with Mahle forged aluminum pistons getting a bump from a Sig Erson hydraulic roller stick. Plenty of power comes from a pair of Air Flow Research 227cc Competition Eliminator aluminum heads while up top the final punch comes from a Borla Induction eight-stack injection system. An MSD Pro-Billet distributor lights the fire while spent gasses dump through a set of Hooker Super Competition fenderwell headers to a custom 3-inch stainless exhaust and Borla mufflers. Power moves through a TREMEC T-56 Magnum six-speed trans to a custom driveshaft by Iron Hill. It's all good for 598 hp at 6,000 rpm.

There's nothing better than a body with clean factory sheetmetal to make the job easier. Preston blasted the shell, revealing only minor sheetmetal replacement needed to the bottom of both quarter-panels. From there, he cut the inner fenders to accommodate the headers and the hood for the injection stacks. Lloyd Originals of Wilmington, Delaware, then crafted custom trunk panels. Adams Hot Rod Shop in Rydal, Georgia, set the gaps and made everything razor sharp in preparation for paint. To add just enough traditional vibe, Chad Adams loaded his spray gun with a classic combination of custom-blended PPG Sunkist Orange and Winter White to bring everything to life. Additional cool bits include a custom-mounted front Moon tank, chrome wheelie bars, and fresh exterior trim accessories.

The factory dash was filled with dials from Stewart-Warner, while a restored factory column meets a stock replacement wheel and shifts move through a Hurst stick. Delaware Chassis Works of Townsend fabbed the six-point 4130 billet rollcage, while Preston installed the Painless Performance wiring kit. The factory seats were freshened-up by Jessie Calloway of Wilmington with classic white Naugahyde pleats accented by custom black fabric along with a fresh headliner, black loop carpet, and Simpson Racing belts.

Preston wanted to thank his dad and son Cole who worked tirelessly alongside him on the build bringing the bond of three generations together with this bitchin gasser, and to us that's the real deal. CHP