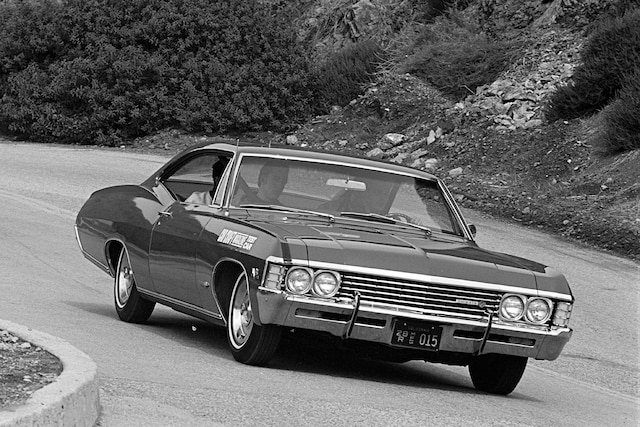 As part of its ongoing series of Car Club Road Tests, Car Craft magazine’s Dick Scritchfield met with members of the Chancellors Car Club of Van Nuys, California, in February 1967, so they could give an Impala SS a thorough going-over.

The Chancellors, Scritch said in his May 1967 story, were “the oldest show and go club in the San Fernando Valley.” And while the “size of the club’s membership has been adversely affected by the draft of late, the Chancellors have been active in holding car shows since 1953.”

The Impala Sport Coupe they tested, with its “swinging new design” for 1967, was equipped with a 325hp/396 big-block joined to a Turbo Hydramatic. Rearend gears were 2.73s, the standard ratio for the TH trans. Options included front disc brakes, full instrumentation, and a floor-mounted shifter with center console.

On paper, anyway, the combo of the low-power Turbo-Jet, slushbox, and tall rearend would turn a big car like the Imp into a snoozer. But the Chancellors didn’t see it that way. “Performance wise, it’s the best new car I’ve driven,” said Jack Henderson, club VP and 1958 Impala owner. “Even with the high axle ratio, the engine/transmission seems to be just the right combination. It sure doesn’t feel like a 2.73 back there.”

Henderson also praised the car’s handling. “The Impala gives you a smooth ride but is extremely stable without pounding you on rough roads. Body lean is very slight, even on tight corners. It’s amazing to me that a car this large and heavy can stay so glued to the road. It handles flat like a sports car yet becomes a luxury car for cruising.”

The guys were impressed with the car’s interior, especially the $79 full instrumentation option, with which “a dash-mounted tachometer replaces the super large fuel gauge in the left bezel, with oil pressure, battery, and temperature gauges to replace the tell-tales,” Scritch said. “Hey, that’s slick,” said Chancellor Dave Booth. “Man, if you can’t see those gauges, you’re really out of it! They must be 5 inches in diameter.”

Chancellor Fred Towe didn’t like the fact that the G70-15 Wide Ovals on the car were part of the disc-brake package on 427-powered Impalas but had to be ordered separately for 396 cars. “As a safety factor, I think they should offer the Wide Oval design as standard equipment rather than as an option,” he said. “I don’t think it’s right that a person has to pay extra for safety. I just added wider tires to my Gran Sport and, believe me, it makes a difference.”

Scritch was frustrated by, of all things, the trim rings that came with the 15-inch Rally wheels. “We thought we’d just snap ’em on. Buddy, don’t you believe it. They have four attaching clips, and every time we’d go to hammer the fourth on, one of the others would pop loose. Being true hot rodders we didn’t let that deter us. No sir! After beating on them for half an hour, we hung them on our arms and took the car to the dealer (who beat them on).” One of our favorite photos from Bob Swaim’s shoot (and one that didn’t make print) is a shot of a very grumpy Scritch with a mallet in one hand a trim ring in the other.

“Not having the hot setup in tires and gears, we didn’t make the strip scene,” Scritch admitted. But he did take the Impala to tuner John Geraghty “to see just how much the engine was really putting out at the rear wheels.” When the chassis dyno turned up 156 hp at 4,000 rpm before the Silvertowns started slipping, Scritch asked Geraghty what he could do.

“Geraghty started by power timing and analyzing the fuel-air mixture,” Scritch said. “Power timing” increased power at the low end with alterations to the ignition system: recurving the distributor; swapping in a Cadillac rotor with built-in resistor “to prevent power surging and arcing to the distributor cap, a common occurrence with Chevrolet distributors”; upgrading the plug wires; and changing the thermostat to bring down combustion chamber temps when the plugs were found to be “burning slightly too hot.”

When Geraghty found the Quadrajet’s secondaries were running rich, he replaced the metering rod, which was “extremely difficult to obtain, even in a city the size of Los Angeles,” Scritch said. But the results were worth it: Back on the dyno, power at 4,000 rpm rose to 223, a 67hp gain.